Demolition - Then What Do I Do? 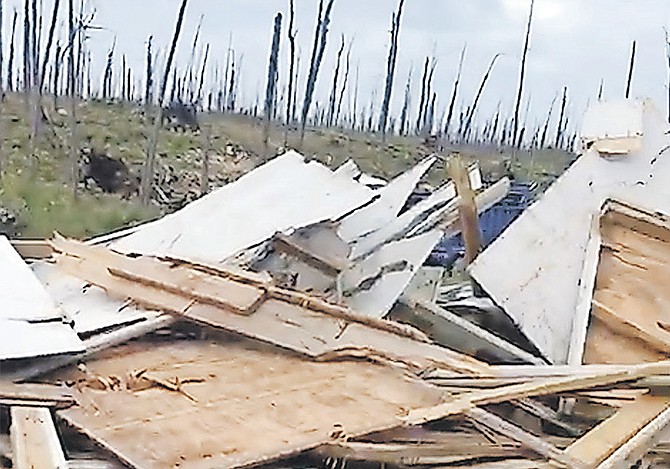 SOME of the debris after buildings in The Farm shanty town were demolished, in this image taken from video.

LIFE is full of uncertainty for Abaco resident Gerald François, who fears for his future on the island with a looming eviction and inevitable demolition of his newly built home in The Farm shanty town.

The 42-year-old, who moved to Abaco from New Providence back in 2006, says he is still not sure where he will go before the government moves to demolish his home come May 7.

It’s a challenge many area residents face due to a lack of available housing on the island, which has remained a big issue for locals there since Hurricane Dorian in 2019.

“Ain’t nowhere to go,” he told The Tribune yesterday. “It’s the people who was born in this country who can’t even find places to go, so imagine us? Ain’t nowhere to go because everywhere where you try to go to rent, it’s either taken or paid in advance before it’s complete.

“The shoe I’m in right now — I can’t move. My car down and to get to work is hectic and they’re focused on The Farm but it’s not only us going through it. You have natural born Bahamians going through the same thing, people in Dundas Town and Murphy Town who still sleeping in cars and it still happening to them now as we speak.

“But the government just don’t focus on them, they’re just focusing on illegals and taking their minds off the real issue – which is trying to help the people.”

Last week, the Ministry of Works spearheaded the demolition of 45 “incomplete and unoccupied structures” in the shanty town after posting eviction notices on several illegally erected buildings earlier this month.

The eviction notices handed out at the time warned inhabitants of the legal prohibition of any new construction and further, of the intention of the government to demolish all of the illegally constructed buildings.

According to Mr François, the demolition works, once completed, could result in some 1,500 to 2,000 people being displaced, many of whom include Bahamian born residents.

“I would say 1,500 to 2,000 and that’s kids included,” he estimated. “They think only illegals live in the back here, but many Bahamians live in the back here too. I built my home this year and did it because since I saw a lot of people making a way for themselves and since I born here and I does pay my NIB, I say I might as well do the same.”

Mr François said while he understands the government’s duty to enforce the law, officials must also show compassion as they too are partly to blame for the shanty town crisis.

The resident also claimed that many shanty dwellers, himself included, did not want to live in the The Farm, but had no other choice due to the discrimination they have faced because of their Haitian background.

“We have been trying to apply for Crown land but they been giving us a hard time to get a piece of land. Because of our last name, they gave us problems and they forced us to do this, you know. They pushed us to this. Ain’t nobody gon’ stay around and not try to give a home to their family. God did not build man for us to stand around.”

“So, since the government chose not to help us, we had to build our own way. I paid tax too but if you don’t make a way for yourself, the government ain’t gon’ do it. So, we had to take matters into our own hands.”

The government’s recent action against shanty towns has been met with criticism from local human rights activists, who strongly condemned the move.

Activist Louby Georges said while he does not support people breaking the law, the government should have released a comprehensive plan in response to the island’s housing crisis.

“As a government, as leaders I would think that any decision that we take regarding humans, we should temper that decision with human rights in mind and with the human element in mind,” he told The Tribune earlier this month.

“We do not want to do essentially what Hurricane Dorian did, which is displace people. Hurricane Dorian destroyed all of the homes that existed. Subsequent to that, thousands of persons ended up being displaced.”

Meanwhile Human Rights Bahamas said it was “unfortunate that the government would choose to create yet another humanitarian crisis on the island of Abaco”.

The organisation added: “We are supposed to be a constitutional democracy that operates according to the rule of law. What is the point of having courts as a forum for settling disputes if the government is just willing to ignore the judicial process, proceed according to the formula that ‘might makes right’ and ruin people’s lives without lawful justification? Just because you have a bulldozer doesn’t mean you have to use it.”

There is one more solution that nobody going through this wants to consider.....Bahamians know what the due process to owning a home is....and it's not building illegally. Haitians ...on the other hand, have a home country they can return to since things are so tough here.

Agreed ....People like Mr Francois need to also come to the realization that the government is doing them a favour by demolishing those shanty structures. With a repeat of a hurricane the likes of Dorian, they would all be destroyed and the people inside them. , Have they forgotten what happen to the mud and pigeion pea already?

These law breakers are hell-bent on playing the sympathy card for all it's worth while they go about overwhelming us and gradually taking control of our country. And they have made this an art form of their's with the help of the likes of Smith QC and his law firm Callenders & Co., not to mention the owners and editorial staff of The Tribune.

Many Bahamians simply do not appreciate that our nation's problems with human trafficking, the illegal drug trade, the illegal trading of firearms and money-laundering are all closely tied to the ever increasing growth of Haitian communities throughout our islands. These illegal communities pose a very real existential national security threat to our small nation.

Like so many Bahamians, I'm both flabbergasted and horrified that Minnis, Dames and Bannister have waited until a national general election is steering them in the face to finally begin, yes begin, to do something meaningful about this enormous problem. But I truly fear it may all be for political show in the run up to Minnis's calling of a general election. Frankly, few of us think Minnis, Dames and Bannister can be counted on to continue a sustained meaningful effort at addressing the security risks presented by these growing Haitian communities.

Oops! "steering" s/b staring. But we certainly also know what 'steers' Minnis, Dames and Bannister most.....their own political survival as opposed to the interests and well-being of the Bahamian people.