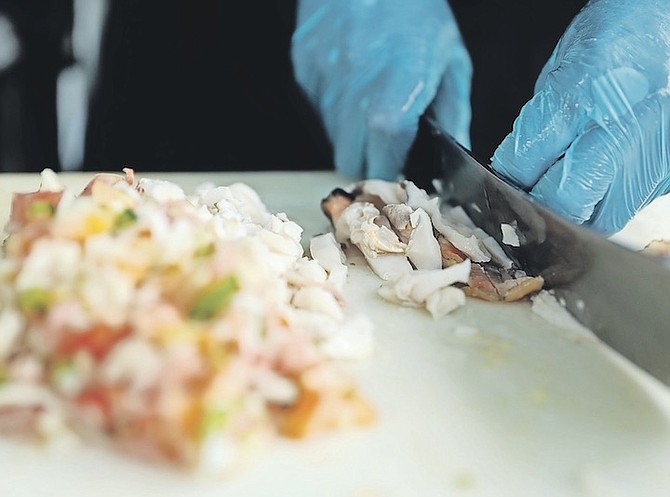 CONCH being prepared yesterday - but officials have issued a warning after several cases of suspected poisoning. Photo: Racardo Thomas

FOOD safety officials are cautioning against the consumption of fresh conch after several suspected cases of conch poisoning.

Several reports of conch poisoning made the rounds on social media over the past few days before the Bahamas Agricultural Health and Food Safety Authority issued a statement yesterday.

The authority warned consumers to avoid fresh conch until officials are able to determine the source of the contamination.

Conch poisoning is typically caused by the bacterium, Vibrio parahaemolyticus, with contamination attributed to poor hygienic practices during its handling and preparation.

Health Minister Renward Wells said there had been about 10 reported cases of conch poisoning. He said the ministry was concerned that this has risen in recent days. He was unable yesterday to say where the cases originated.

Meanwhile, Bahamas Commercial Fishers Alliance President Adrian Laroda said he would not caution against eating conch because it could have implications on the industry. Instead, he urged handlers to wash the mollusk properly during preparation.

“The Bahamas Agricultural Health and Food Safety Authority Food Safety and Quality Unit has been made aware of suspected conch poisoning cases,” a BAHFSA statement noted. “BAHFSA would like to caution consumers to avoid eating fresh conch at this time or conch that they suspect was not properly handled and/or prepared until the source of the contamination can be determined.

“Signs of infection may be in the form of watery diarrhea, abdominal cramps, nausea, vomiting, fever, headache and bloody diarrhea and usually occur within 24 hours after ingesting the suspect food but may range between four to 96 hours.

“This may last from one to seven days and although in most instances treatment may not be necessary, infected persons who are experiencing any of these symptoms should seek medical attention at their local clinic or nearest medical facility.”

Officials said reporting an illness is critical in conducting a trace-back investigation to determine the point of contamination and the pathogen at fault.

“We ask that consumers assist us by reporting these events. This allows the development of an effective and collaborative response to this and similar outbreaks. It is important to note that severe illness is rare and occurs most often in persons with weakened immune systems.”

The guidelines include storing the conch in an area of sea water where the current is flowing and not stagnant. The latter can promote the proliferation of pathogenic organisms.

Vendors should also avoid having the conch sit in the sun for long periods of time and after the conch meat is removed, it should be gutted and rinsed thoroughly under potable running water for enough time to carefully remove all the slime and debris present. Also, vendors should wash their hands before and after preparation with liquid hand soap and warm running water for 20-30 seconds.

Gloves should also be worn when preparing conch salad or other fresh preparations where further cooking is not done.

Hair nets and disposable aprons should also be worn to prevent cross contamination. Gloves should be changed regularly if they become torn or in between tasks.

Consumers are urged to be vigilant to ensure that wherever they are purchasing raw conch dishes, vendors are following hygienic practices. Those who purchase raw conch to prepare at home should follow these preparation steps as well.

My God, what on earth is next in store for us Bahamians? Minnis is truly jinxed, and it's killing us! It seems we're cursed in every possible way for having allowed him to become PM.

I aint no minnis fan. But damn. You say the dumbest things... Damn....

And whats amazing is he was able to do this even before he came to power as we have had these outbreaks for years. He must be a most powerful person.

Anybody been to Potters Cay? Ain’t a toilet around. They piss and crap in a bucket. When the bucket is full they dump it right out the back door, and into the harbor that has no water flow because it has been blocked by all of the construction. Ten minutes later they send their lackey for the conch and they pull it straight out of the same water they just dumped their dung in. No wonder people are getting sick.

Not only that, you often see the guys who cut up the conch go take a pee just about anywhere with the use of one or both of their hands to try guide the flow, and then they promptly return to the stall without any washing of their hands to resume cutting up the conch. And more often than not, they do not wear gloves. I've even heard some people say it's this type of unsanitary behaviour that gives the conch salad and scorched conch sold at Arawak Cay and Potters Cay its special one-of-a-kind sumptuous appeal. lol

Persons who purchased raw conch products all the way in the Western part of the island came down with the sickness. Remember the corona virus also moves from humans to other animals. Is this a new strain? Some people are still bed ridden since the weekend..

So what is going to happen? If this were america, all the conch would be recalled and destroyed only in the bahamas nothing happens. These vendors will freeze.the conch and still sell it to consumers. Every place selling conch should destroy their stock. If you get sick and have to go to doctors hospital it can cost you a.pretty penny. Health officials should contact.trace the.big buyers.and confiscate that batch.

There’s nothing wrong with the conch itself, it’s the harbour. The big rain we had the other day pushed all kinds of contaminated wastewater into the harbour, where the conch are stored and rinsed. This happens at the start of the rainy season every single year.

There’s nothing wrong with the conch itself, it’s the harbour. The big rain we had the other day pushed all kinds of contaminated wastewater into the harbour, where the conch are stored and rinsed. This happens at the start of the rainy season every single year. Cooking the conch, btw, makes it perfectly safe to consume.

I think it was sometime in early March 2020 when I had this strong feeling that the return of our Lord Jesus is very soon... every morning since then when I wake up and become aware that He hasn't yet returned, I feel a bit surprised..

Bahamians seem to be very neglectful in taking care of their health... the 11th chapter of Leviticus tells us that God Himself says that fish and other sea animals must have both fins and scales to be regarded as healthy for eating... well conchs have fins but no scales, and therefore we should not eat them!