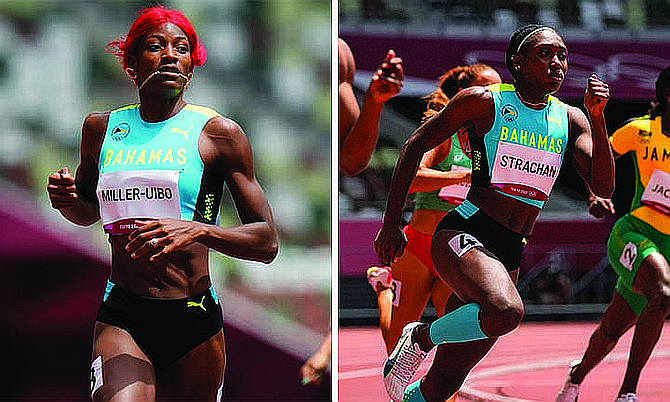 AFTER all of the confusion over which three women should run the 200 metres at the 2020 Olympics, only two showed at the starting line on Monday at the Tokyo National Stadium in Japan with both Shaunae Miller-Uibo and Anthonique Strachan advancing to the semi-finals.

To start her bid for the medal missing from her resumé, Miller-Uibo, with her red coloured hairstyle, got off to a great start, making up the stagger from lane three ahead of Gloria Tapper in four. On the home stretch, she cruised behind Marie-Josee Ta Lou of the Ivory Coast in lane six.

Ta Lou, coming off a fourth place finish behind the Jamaican sweep in the 100m, stayed ahead through the line in 22.30 with Miller-Uibo coasting through in second in 22.40. Nigeria’s Grace Nwokocha took the third automatic spot in a personal best of 22.47.

The 27-year-old Miller-Uibo, in her third appearance at the Olympics, came into the games with a lifetime best of 21.74 for the national record and a season’s best of 22.03. She’s expected to go for the double as she defends her title in the 400m that she won in Rio de Janeiro, Brazil in 2016.

Her debut in 2012 in London, England was hampered by an injury and she didn’t finish the one-lap race.

In her last global competition in 2019 in Doha, Qatar at the 2019 World Championships, Miller-Uibo was beaten by gold medalist Salwa Eid Naser from Bahrain, who has since been suspended.

Strachan, who had to undergo a runoff with Grand Bahamian Brianne Bethel to secure her berth in the event, ran out of heat five in lane four. She got out of the blocks and surged ahead coming off the curve and extended her lead down to the home stretch.

With the race pretty much wrapped up, she eased through the tape in 22.76, well ahead of Lorene Dorcus Barzolo of Portugal in 23.21. Dalia Kaddari of Italy was third in 23.26. But the big shock was Jamaica’s Shericka Jackson, coming off her bronze medal in the 100m – she was holding second place, only to ease up at the tape and ended up fourth in 23.26 to be eliminated.

Tynia Gaither, who made it to the semi-final of the women’s 100m, was the other Bahamian set to compete in the 200m. However, she opted out of competing and, according to reports from the Bahamas Olympic Committee’s management team in Tokyo, it was too late to insert Bethel into the line-up.

Miller-Uibo and Strachan take the sixth and 14th fastest times respectively into the three semi-final races. Christine Mboma of Namibia posted a national record in coming back to win her heat in the fastest time of 22.11, ahead of American world leader Gabrielle Thomas with 22.20.