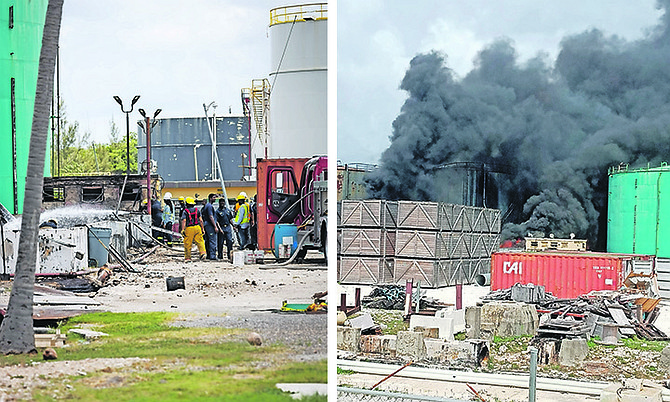 FIREFIGHTERS cleaning up after the blaze and, right, smoke rising from yesterday’s fire.

BAHAMAS Power and Light said a mid-morning fire yesterday at its decommissioned Station O at Clifton Pier had no impact on generation or other operations.

Pictures and videos  of the fire made the rounds on social media with many expressing concern that the incident could affect already unreliable power supply that has plagued residents for the past few weeks.

However, in a statement yesterday, BPL explained that the fire took about 25 minutes to extinguish, adding that it happened as a contractor was in the process of cutting apart two out of service diesel tanks.

BPL’s statement read: “Bahamas Power and Light Company Limited (BPL) can confirm that there was a fire at the Clifton Pier Power Station on Tuesday, August 3, 2021. The fire was extinguished within 25 minutes, thanks to assistance from Sun Oil and Sol Petroleum. Given the location of the fire, which was at the decommissioned Station O site, there was no impact to either generation or fuel supply.

“Reports were received around 10.40am that a contractor hired to facilitate the decommissioning of Station O was in the process of cutting apart two out-of-service diesel tanks that were isolated and not tied into any part of the system when sparks appear to have ignited some residual fuel in the bund walls.

“The contractor immediately notified BPL personnel, who reacted with firefighting supplies from on site to suppress fire, with assistance from Sun Oil and Sol Petroleum. The Fire Department arrived shortly thereafter and were able to extinguish the fire. The whole episode took approximately 25 minutes. As noted, the fire was in an isolated area, and had no impact on generation or other operations.”

A BPL source at Clifton Pier at the time of the incident described the effort as heroic to save the plant at large from any serious damage.

“We saw the fire and it was thereabouts at Station A,” the BPL source said. “BPL staff situated at Clifton Pier and Sun Oil staff came together quickly and kept the fire from spreading until the fire trucks arrived. We used a foam machine that we have there, and we acted quickly.

“There was a nearby tank and we kept putting water on it to keep it cool. The main fuel station that supplies Blue Hill Power stations was less than 100 yards away from the fire.”

Perhaps there should be a procedure in place for when cutting torches are used anywhere on the compound. 1. There should always be a man in place with a suitable fire extinguisher and 2. The appropriate fire station or on-sight fire team be put on notice and at the ready.

Other than that, kudos for putting the fire out in 25 minutes.

Agreed. They should also test for flammable vapors in the immediate area and have a site manager sign off on a permit, that gives permission for a cutting torch to be used