‘I Felt My Hamstring So I Decided To Shut It Down’ 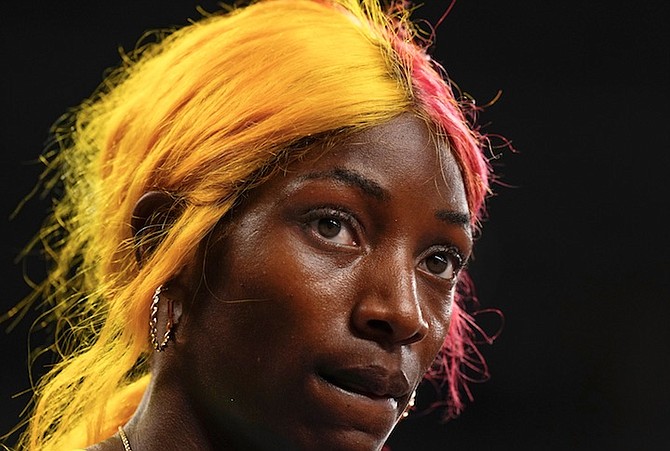 SHAUNAE MILLER-UIBO warms up before competing in the final of the 200-metres at the 2020 Tokyo Olympics on Tuesday, August 3, 2021. (AP Photo/Francisco Seco)

Citing a hamstring injury that hampered her progress, Shaunae Miller-Uibo couldn’t gut it out with the field yesterday and had to basically jog to the finish line in 24.00 seconds for eighth place in the women’s 200 metres.

She could only watch as Jamaica’s Elaine Thompson-Herah made history as the first double sprint champion in two consecutive games, running a national record of 21.53 to go along with her Olympic record in the 100m, pushing her second on the all-time list in both events behind world record holder Florence Griffith Joyner (10.49 in the 100m and 21.34 in the 200m).

Christine Mboma, one of the two 18-year-old competitors in the race from Namibia, stormed back in the final stage on the home stretch to surge into the silver medal spot in an under-20 Olympic record of 21.81. She and team-mate Beatrice Masilingi, sixth in a personal best of 22.28, were limited to competing in just the 100 and 200m because of a high testosterone count.

Not to be out-done in the celebrations was American Gabrielle Thomas, who came into her first Olympics as the fastest woman this year. She had to settle for the bronze in 21.87 as she left Jamaica’s 100m silver medallist Shelly-Ann Fraser-Pryce clinging to fourth place in 21.94.

For Miller-Uibo, running the race just 12 hours after she easily won the first round of the 400m in her surprising quest for the 200/400m double in the Tokyo National Stadium at the 2020 Olympic Games, she knew she just couldn’t go with the pack coming off the curve. “Coming off the curve, I felt my hamstring so I decided to shut it down, but hopefully I’m good,” said Miller-Uibo in a voice note from Tokyo. “I’m going to go back and get some treatment and we’ll go from there. Hopefully, I’ll be ready for tomorrow (today). The main thing is just making sure that we’re healthy and going from there.”

Miller-Uibo, the 27-year-old double national record holder, was referring to coming back to continue her defense of her title in the 400. She got out strong in her first round heat 12 hours before the 200m final and with enough gap between her and her nearest rival, she was able to shut it down and jogged across the line in.

Running out of “no man’s land” in lane nine, Miller-Uibo again got out, but coming off the curve, the field caught and passed her. As she got onto the straight away, it was obvious that she didn’t have that zip that she’s accustomed too and wasn’t able to mount a comeback.

“I just give God all the thanks and praise. We’ve been going through a lot leading up to the games – a lot of injuries. Even up until this morning, I was in a lot of pain, but coming up to this evening, everything felt great.” Miller-Uibo also said in her voice note.

“The injuries just got the better of me this year. We weren’t able to train as well for the 200 but we got in a lot of training for the 400, and once I feel okay in the morning, then we’ll be ready to go for the 400 semis.”

While indicating all season long that her concentration was on the 200m, Miller-Uibo said her camp had planned to contest the 200/400m double, but they just never went public with it.

Her camp had agitated for the International Olympic Committee to make a slight change in the schedule to give her at least a day’s rest in between the two events so that she can pursue the feat, but the request was not granted.

No further concentration was had about the commitment to the mammoth task, but Miller-Uibo competed in both events in the lead up to the Olympics and at one point held the fastest times in the world in both races.

The 200m just didn’t turn out the way she anticipated and now it’s up to her to come back and turn up the heat in her signature event in the 400m. That’s if she’s healthy too, she indicated.