Gold For Steven Gardiner: First Medal For The Bahamas In Tokyo 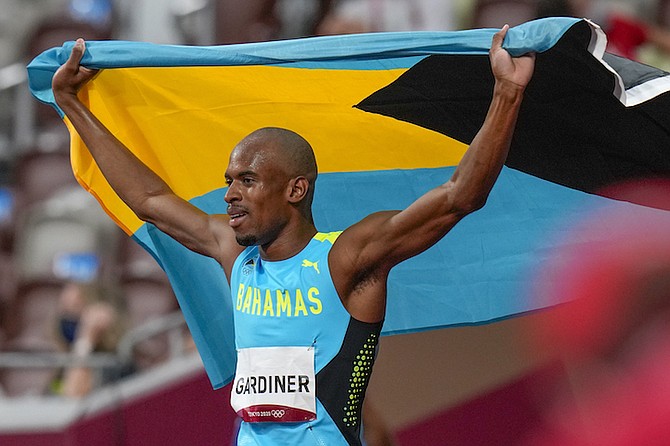 On the biggest stage on the world on Thursday night at the Tokyo National Stadium, Gardiner stormed from a conservative start in the first 150m to pour it on over the last 300m, extending his lead on the home stretch for an easy victory in a season’s best of 43.85 seconds.

Columbia’s Anthony Zambrano managed to put a little daylight between the rest of the field and Gardiner to celebrate with the silver in 44.08. Grenada’s Kirani James picked up his third medal with the bronze in 44.19 – he won the gold in 2012 in London England and silver in 2016 in Rio de Janeiro, Brazil.

Gardiner, the 6'4" tall Abaconian, was a semi-finalist in his Olympic debut in Rio de Janeiro where he also helped the Bahamas men’s 4 x 400m relay team clinch the bronze medal.

But without any relay duties in Tokyo, the 25-year-old’s sole responsibility was the 400m and the Bahamian national record holder delivered a masterful performance out of lane seven to maintain his world number one ranking.

He became the first Bahamian since women's 400m champion Tonique Williams (in 2004 in the Athens Olympics and 2005 Helsinki World Championships) to hold both global titles consecutively.

Since he lowered his lifetime best to 43.48 when he claimed his first global title at the World Championships in Doha, Qatar, Gardiner had not cracked the 44-second barrier, producing a 44.47 in Hungary on July 6 just before he arrived in Tokyo.

Steven Gardiner, of The Bahamas, races to the gold medal ahead of Anthony Zambrano, of Colombia, silver, and Kirani James, of Grenada, bronze, in the final of the men's 400-metre at the 2020 Summer Olympics, Thursday, in Tokyo, Japan. (AP Photo/Charlie Riedel)

Through the rounds, he got second in 44.34 behind Zambrano’s 44.07 for fourth place overall and in the semi-final, he lowered his season’s best to 44.14 as he won his heat for the third best time overall going into the final.

But Gardiner saved the best for the last and it produced another gold medal performance, keeping the Bahamas’ tradition of earning at least one medal in every Olympics since Frank Rutherford broke the barrier with the bronze in the men’s triple jump in Barcelona, Spain in 1992.

And it will be the sixth time that the Bahamian national anthem will be played at the games in track and field competition, the last time coming in Rio de Janeiro in 2016 for Miller-Uibo in the women’s 400m. Miller-Uibo will be defending her title on Friday for another medal for the Bahamas.

The first overall gold medal won by the Bahamas came in 1964 – in Tokyo – when Sir Durward ‘Sea Wolf’ Knowles teamed up with Cecil Cooke in the Star Class in sloop sailing.

• This story has been corrected to say that Cecil Cooke won The Bahamas' first Olympic gold medal with Sir Durward ‘Sea Wolf’ Knowles.

A win for him! A win for the Country! #TeamBahamas

wow, awesome! you are amazing!

We're proud of you brother! Congrats!

CONGRATULATIONS…! Spectacular performance. GOLD… got it!

Simply fantastic. Our flag hasn't looked that good in a long time.

To the best of my recollection Sloane Farrington was not Sir Durward's crew when he won the gold medal. It was Cecil Cooke. In any event, congratulations to Steven. He has made The Bahamas very proud.

As a frequent visitor to the Bahamas i want to congratulate Steven Gardiner on his 400m win. He ran a marvelous race and was actually slowing up at the finish line.

Even with his stumble at the start, he comfortably ate away the gap along the back straight. He looked so relaxed all the way around. A very worthy champion !!

Congratulations to you Steven Gardiner you have made the nation proud. I am especially proud of how you have endured the unfair criticisms about the men's relay team and hold your head high and deliver. Congratulations to your team around you coach and management also they have kept you level headed, modest and you are still humble. Job well done.