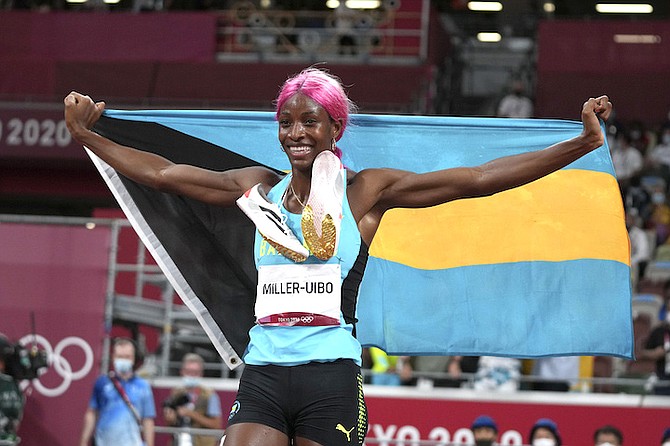 Shaunae Miller-Uibo celebrates after winning the gold medal in the women's 400-metre final at the 2020 Summer Olympics, Friday in Tokyo. (AP Photo/Matthias Schrader)

Shaunae Miller-Uibo wins the final of the women's 400-metres at the 2020 Summer Olympics, Friday, in Tokyo. (AP Photo/Petr David Josek)

FORGET the injury. Erase the major disappointment of last place in the 200 metres. Shaunae Miller-Uibo was in vintage form as she blew away the field to successfully defend her title in the 2020 Olympic Games women’s 400 metres.

The 27-year-old Miller-Uibo obliterated the field in a North American, Central American and Caribbean (NACAC) area record time of 48.36 on a historic Friday at the Tokyo National Stadium, beating silver medallist Marileidy Paulino of the Dominican Republic by about 5-10m.

It was just shy of the Olympic Games’ record of 48.25 that was set by Marie-Jose Perec of France in Atlanta, Georgia in 1996, but it erased her national record of 48.36 that she did two years ago in picking up the silver at the World Championships in Doha, Qatar.

Paulino trailed in a national record of 49.20 and American Allyson Felix, the most decorated female athlete at the games, closed out her storied career with a gallant comeback effort out in lane nine for the bronze in a season’s best of 49.46 – her 10th Olympic medal.

Miller-Uibo’s performance came moments after NACAC president Mike Sands presented the flowers to Steven Gardiner during the medal presentation for his victory in the men’s 400m the day before as the national anthem was played for the first time in the games.

Now for the second time in two consecutive games, Miller-Uibo will return to the top of the podium as she collects her second Olympic gold and the third for Bahamian women, following the initial one earned by Tonique Williams in 2004 in Athens, Greece.

While Gardiner and Williams are the only two Bahamians to capture both the World Championship and Olympic gold medals in consecutive outings, Miller-Uibo has earned an achievement of her own – the first and only back-to-back Olympic champion to go along with her silver medal at the 2019 World Championships in Doha, Qatar.

Using her 6-foot, 1-inch frame, Miller-Uibo took her time coming out of the blocks in lane seven. She stayed comfortably in the pack on the back stretch. But, coming off the curve, she surged to the front and in traditional style, she turned on the burners and wasn’t challenged to the line.

There had been some concerns after she had to jog through the finish of the women’s 200m final after feeling some discomfort in her hamstring. But Miller-Uibo didn’t seem to have any issues in the 400m.

With her performance on the heels of Gardiner’s, The Bahamas has moved up from 60th to 36th on the medal chart with a pair of gold medals and the national anthem played for the second time in one night. The Bahamas has now accumulated a total of 14 medals in track and field, including seven gold, extending their streak of winning at least one every games since Frank Rutherford broke the ceiling with his bronze in the men’s triple jump in 1992 in Barcelona, Spain.

And we can only assume the very disappointed last place members of our women's 4 x 400m relay team were dazzled by Shaunae's 'go it alone' gold medal performance in the 400m. Putting self over team has paid off well for Shaunae personally, and of course our nation's gold medal count.

How about you go and earn us a medal, then you can comment on her personal choices

She gave me and every other Bahamian the right to comment on her personal choices about which track races she would or would not run the very moment she decided to represent The Bahamas. lol

She is Simply the best "In Tina Turner voice"

"Shaunae Miller-Uibo was in vintage form as she blew away the field to successfully defend her title in the 2020 Olympic Games women’s 400 metres."

If there were Olympics for journalism, The Tribune would never get a medal! Pretty sure this was the 2021 Olympics. Kudos to her!

Actually, this is still being called the 2020 Olympic Games. Covid caused the one-year delay but if you look around the stadium in the games, everything is still branded "2020 Olympic Games". The next one is still scheduled for 2024 per the usual schedule. The journalist is correct.

What a race! What a pace! what a finish! You go girl and ...congratulations. Minis ger give you on piece a crown land still! You and the Golden Child, Steven Gardiner!

If the foreigners will sell it back to him to give to her....yikes

BEST IN THE WORLD SHAUNAE. And I am bursting with pride. You have done well extremely well God bless you. I Love the Bahamas.

Give them among other things some beachfront property. Exuma or Eleuthera beautiful Islands that they can always come home too

@ComradeBirdie, look no further than at your party's Perry Gladstone, cause wasn't it under his premiership that the Comrade Sister Shaunae, was previously and falsely promised her very own plot of land and house?
Some has gone as far as to talk it how the sister, had also been promised a million dollars in cash?
Under the colony's former premiership, the sister, would've qualified as being left Homeless, yes?

It might shock you to know that Minnis has given away much more Crown Land to foreigners and much less Crown Land to Bahamians than Pindling, Ingraham and Christie ever did, possibly combined.