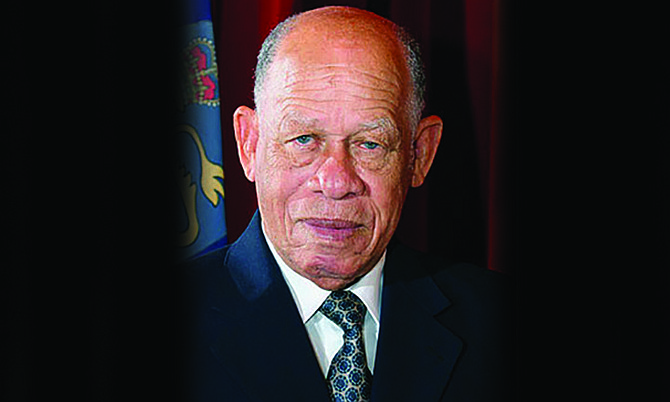 Dr Minnis revealed this in the House of Assembly as he paid tribute to Mr Hanna, who died at home last week at 93.

Mr Hanna was instrumental in the move to independence and the development of the Bahamianisation policy.

Throughout his life he rejected honours from the Queen and advocated for a Bahamian honour system to take its place.

Dr Minnis said yesterday that he is speaking to Mr Hanna’s family as they prepare a state funeral for him.

“While his family has lost a father through bloodline, the nation has lost a founding father,” he said.

“Through the bonds of citizenship and affection, all of us are in some way the sons and daughters of this great man whose love for the Bahamas was boundless. He was a firebrand and patriot who loved our Bahamas with unrelenting devotion, courage and action.

“He gave his life to the Bahamian people through the struggle for majority rule and independence. AD Hanna fought for equality and social justice throughout his long life. He was a champion of the poor, vulnerable and downtrodden. Many of our national institutions and progressive national policies bear the hallmark of his advocacy for Bahamiansation.

“So that we can remember the contributions of the honourable AD Hanna, a new $100 bill bearing the face of AD Hanna replacing that of the Queen will commence and be issued officially in The Bahamas in 2022.”

In a statement, Mr Hanna’s family expressed gratitude for the gesture.

“Our father would have been humbled and reluctant to be the recipient of such an honour,” the family said.

“He was unequivocal in his belief that no Bahamian should be as interlopers at home or abroad in the common quest. We thank the people of The Bahamas for allowing AD Hanna to serve. We thank the government for recognising his contribution to the birth and development of the Bahamian nation.”

The man is incorrigible! He will do ANYTHING for votes.

lol. He's so bad at it its amazing. What's even worse than announcing this move is not acknowledging that it was the last administration thst initiated the move

ATTN: DDK, Thisisours and Birdiestrachan, I have to give you guys a thumbs up for just about always trying to put a Foot Down on PM Minnis.

Now let me correct you all, Minnis is an Opportunist if anything. Recall to his new honorary addressing as "The Most Honorable", a skewed reflection to AD's discussions and talks of an Honorary Bahamianization system. . Furthermore; sounds like he was just waiting from AD to past over, before he pander to the same Hanna's constituency. It's politics borderline Politricks! Had he come together with the PLP, and Independents and announced this as a We idea that would have been good politics!

The doc is a smooth liar. it comes naturally to him. A stranger to the truth. He is becoming an embarrassment to himself.

Only a real fool can believe anything he has to say.

Yes but will it trade equal to a Benjamin?