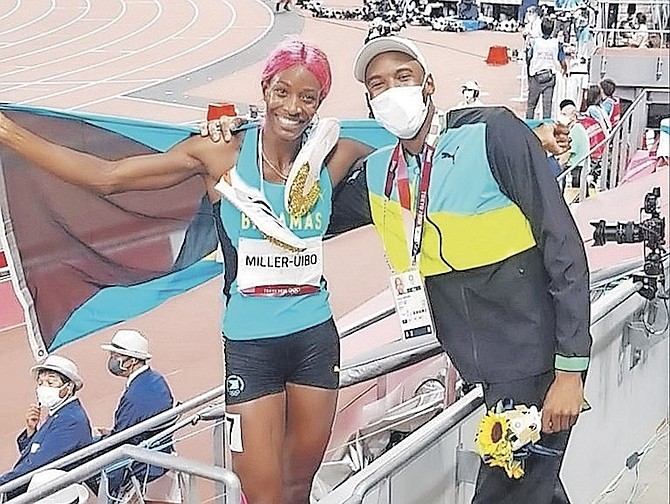 SHAUNAE Miller-Uibo and Steven Gardiner will each receive $40,000 for winning gold in the 400m at the Tokyo Olympics, Youth, Sports & Culture Minister Iram Lewis said yesterday.

The government gives monetary incentives to athletes who win medals at the Olympics. These include $30,000 and $15,000 for silver and bronze medals.

The Bahamas won two medals at the games.

“We are on top of the world when it comes to what we do for our athletes,” Mr Lewis said. “The government is exploring in what other ways we can demonstrate our appreciation of the magnitude of the accomplishments of our athletes.”

Mr Lewis contrasted what The Bahamas awards its athletes to what other countries give their subjects who medal at the Olympics.  Among the eight countries he mentioned — Singapore, Jamaica, Australia, Canada, South Africa, the United States, The Bahamas and Japan—only Japan and Singapore offer gold medal winners more money, though The Bahamas offers silver and bronze medalists more money than does Japan. Gold, silver and bronze medalists in Singapore can be awarded $737k, $369k and $184k respectively, far higher than other countries.

“I am delighted but also very apologetic,” he said. “Apologetic due to the extensive time taken to bring this matter to resolve. I apologise to our Golden Knight Ramon Miller who has already completed his home and was challenged with the missing infrastructure but satisfied that his woes will soon be no more.”

Mr Lewis said Mrs Miller-Uibo and Mr Gardiner will arrive at Lynden Pindling International Airport around noon today and will be greeted with Junkanoo sounds and people waving flags.

We are on top of the world when it comes to what we do for our athletes, right! invest truly in sports don't sing it bring it.

Read the article to completion please and you would see that they will also receive a piece of property in Olympia Heights, the last ones i remember were an acre in size. Answer me with what you think the value of that property might be.

This Minister seems very idiotic. Why is he comparing himself to other countries? Why didn't he add Haiti to the list? Or why add Singapore. It doesn't matter if Singapore gives 100 Million. They don't win anything anyway.