Grace Is Not Expected To Be Major Threat 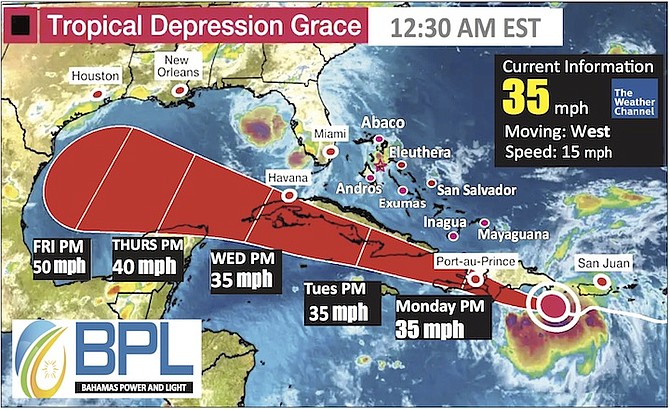 LOCAL meteorologists are monitoring the development of Tropical Depression Grace, however, it is not expected to be a major threat to this country.

The storm is expected to pass over or near Haiti tonight and will remain over that island for about 24 hours, forecasters predict.

Senior deputy director of the Department of Meteorology, Jeffrey Simmons, said yesterday there is still an advisory in place for The Bahamas’ southern islands.

“We still have an advisory up for the southwest Bahamas,” Mr Simmons said. “Tropical Storm Grace right now is very disorganised at this time even though we expect some activities... here starting Tuesday night.

“... It is headed west, northwest. We expect that system to go on shore of Hispaniola early Monday morning and then exit on Tuesday morning. So that’s almost 24 hours. The system right now is not well organised.

“With that being the case and moving into an area like Hispaniola which is very mountainous, with slow movement spending almost 24 hours over that island, we don’t expect much to emerge off the west coast of Hispaniola on Tuesday morning. After that it should start moving to eastern Cuba which is another mountainous area.”

Doubtful that the storm will make that much of an impact on the southern Bahamas, Mr Simmons said the advisory is still in place mainly out of an abundance of caution.

“What we are looking at right now is more of a cautionary thing we are doing by putting up this alert for the southern Bahamas,” he said continuing. “If you would notice yesterday (Saturday), we had it both for Turks and Caicos and the southern Bahamas, but we have since dropped the Turks and Caicos because they are well off to the east and more or less out of the loop.

“The southern Bahamas, particularly Inagua and Ragged Island, those two islands we are concerned about at this time. We are just keeping an alert up for those islands to keep the residents on their guard. The way the system is so weak and the more hostile environment it will be going through over the next 24 to 48 hours, we don’t expect much to come off except some showers.

“However out of an abundance of caution we are holding an alert for the islands of the southern Bahamas. By tonight or early tomorrow morning we will see how things are going and then we will probably lift the alert that we have in place for those islands.”

Regarding Haiti, Mr Simmons noted that the southern area that was most devastated by the earthquake will probably only have some showers, but northern Haiti will have the full effects of the storm.

“We are looking at the Dominican Republic to start to feel it Monday morning and we look at it crossing the Haitian border on Monday night,” he said. “For right now we are looking at northern Haiti being affected.

“Most of the activities will be to the north of that island so where you would have had the earthquake in the southern portion of the island near the Port-au-Prince area, we don’t look for that area to be seriously impacted. They will get showers there in the southern area, but not the brunt of the storm.”