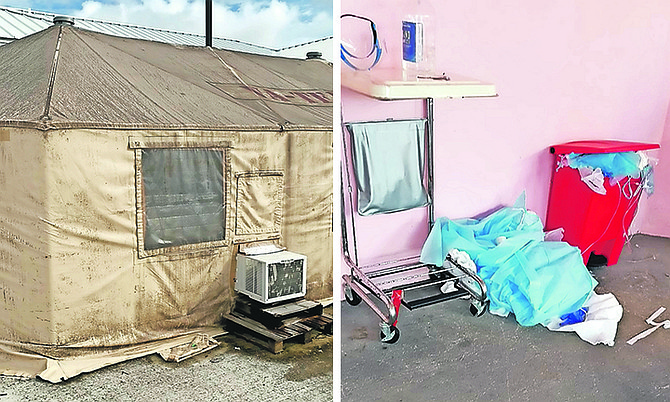 THE CONDITIONS health workers are dealing with in Abaco, including a tent covered in mould where suspected patients are to be treated and unsanitary surroundings.

THE increasing number of COVID-19 cases in Abaco has overwhelmed healthcare workers who are already strained by “poor” working conditions coupled with ongoing staff shortages.

In a statement sent to The Tribune yesterday, Abaco nurses said the current health crisis has stretched workers beyond measure and has also placed strain on an already burdened healthcare facility that has not recovered since Hurricane Dorian.

One healthcare worker said because of the limited resources there, nurses are forced to treat suspected or confirmed COVID-19 patients in “mouldy” tents and unsanitary conditions.

The nurses also said there are no bathroom facilities at the healthcare site for positive patients and staff, the latter of which are forced to work in heated conditions in full protective gear.

“There is no facility in Abaco to manage suspected (people) or patients that we know have COVID so if any patient presents to the clinic with COVID symptoms or has been diagnosed by a PCR or rapid antigen test, if they come to Marsh Harbour Clinic, the only place we have to put them is either on the porch or outside on the back of the clinic where the ambulance entrance is or a tent structure that they have for the patients,” one worker said.

“The tent itself is covered in mould and mildew and there are no restroom facilities for basic hygiene or excretory needs.

“You can’t bring them in the clinic because the clinics have no negative air pressure, so you’ll be putting other staff members at risk by bringing suspected cases or other positive patients in the clinic.

“We are completely overwhelmed as a nursing and medical body here in Abaco.”

This comes as healthcare workers across the country continue to struggle with exhaustion from the increasing number of COVID cases.

However, nurses on Abaco said while they’re willing to work, they’re tired of being mistreated and disrespected.

They have previously voiced their concerns about the lack of safety protocols, security and unsanitary conditions at the Marsh Harbour Clinic.

Despite their repeated calls for help, the group said their cries continue to fall on deaf ears.

“Since Hurricane Dorian passed, the upkeep of the clinic has been overlooked. For several months, we have been working under poor, inhumane and mundane conditions,” nurses continued.

The group is also upset about not receiving honorariums like many of their colleagues and stood in solidarity with many other public health nurses who called in sick yesterday.

The Tribune understands services at Marsh Harbour Clinic were affected by the sickout among staff there and could only deal with emergency cases.

This comes as the island is experiencing an increase in COVID-19 infections, with the island’s tally now at 507 after nine new cases were reported on August 15.

There have been increasing concerns about a reported COVID-19 outbreak in the community, specifically on the Abaco cays.

Yesterday, healthcare professionals told The Tribune they believe the actual number of COVID-19 infections are much higher than the reported number, saying many locals have been testing positive by way of the rapid antigen and not following up with PCR tests.

RT-PCR tests are currently used as the gold standard to determine COVID-19 infection in The Bahamas and are the only test results included on the nation’s COVID dashboard.

Yesterday, nurses called for government officials to send more supplies to help manage the influx of positive patients on the island.

“Here, the nurses play the role of the pharmacist as well,” the group said. “And although we’ve sent numerous requests to Nassau for medications, we do not even have IV antibiotics or corticosteroids to supply COVID clients who are unable to be transported to Nassau for tertiary level care. We are so strained here it’s hard to even have IV fluids.

Attempts to reach healthcare officials for comment were unsuccessful.

Until this Abacoian was taken picture surfaced,— It would've been — Beyond the colonial scope all political probability,— That it would be the Red FNM Regime's — 2017, 35 House-elected Red MPs — Who would've been chosen to lead the — Colonial Abacoians — Back to Africa,— During the eighth month of August in the year 2021?— Comrades, — You just can't make this — Out Island hutty clinic shi# up**.— Yes?

mundane? that means ordinary... theyre trying to convey that things have deteriorated drastically, anything but ordinary...

This is pretty serious. All while they were flying about campaigning they could have been ensuring that we were prepared for another wave. Why is the tent mouldy? Wasn't there a plan for maintenance?