DIANE PHILLIPS: What happened to our compassion for Haiti? 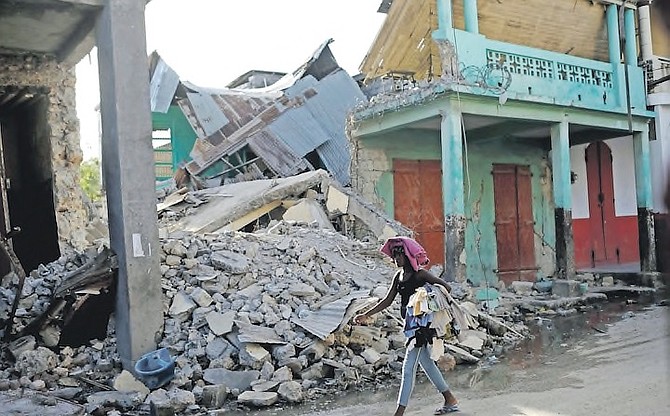 A WOMAN walks past a collapsed building in Jeremie, Haiti, after the 7.2-magnitude earthquake. (AP Photo/Matias Delacroix)

ON Saturday, August 14, a magnitude 7.2 earthquake hit Haiti, killing more than 2,000 people, over 20 times the number who died in the Surfside building collapse which had us glued to our TV screens watching the tragedy unfold. The Haiti quake left some 53,000 homes destroyed, thousands of adults and children without shelter and struggling to find food. The UN estimates 12,000 people were injured and upwards of 300 men, women and children are still missing. Buildings, churches, schools, tiny businesses were reduced to mountains of rubble. Watching shirtless men in shorts try to pull out whatever they could from that rubble with nothing more than a broken shovel and a heart full of hope is gut-wrenching. Two days later, torrential rains from Hurricane Grace drenched Haiti, causing mudslides, displacing even more.

And here we sit, complaining about the red and yellow signs that dot the landscape.

How different today is from our response as a nation when an earthquake hit Haiti in January 2010. Within hours, the Rotary Clubs and Chamber of Commerce were on the phone.

I agreed to chair a committee to put together a national telethon. The very next day a representative from every media house crowded into the small office I occupied at the time. Everyone we called agreed to help and asked what more they could do. Bank of The Bahamas jumped on board, Atlantis offered space for free, BTC and Cable Bahamas partnered to provide all the phone and internet connectivity we needed, ZNS and every media outlet in existence – online, print and electronic – participated.

Nassau Guardian’s Paul Fernander and Cable’s Alicia Coakley organized the run of show. Politicians from all parties, business, civic and religious leaders, ordinary folks manned three long rows of the telephone bank that was organized by half hour segments, many of the volunteers lining up friends to call before the telethon even got underway. Musicians performed for free. TV carried the Help Us Help Haiti telethon live.

We raised about a half million dollars, Rotary took the lead in getting supplies to Haiti and this country, which is home to more Haitian nationals per capita than anywhere in the world (there are more in number in Miami-Dade), never questioned why we came to the aid of our neighbour. We knew it was the right thing to do and we just did it.

Haiti is in worse shape today than it was in 2010. Still the poorest country in the Western Hemisphere, it recently experienced the brutal murder of its President and despite a replacement being installed, there remains a lack of strong leadership in a country that needs it desperately.

It is hard to say Haiti without following it with the word poverty. Once the reigning queen of the Caribbean in tourism for its stunning natural beauty, Haiti and its people did not deserve the torture they endured under Papa Doc Duvalier and Baby Doc who succeeded his father and, with the exception of a short interlude, maintained a reign of terror that lasted nearly 30 years. In three decades while the world looked the other way, Haiti was plundered, the Duvaliers living in extravagant luxury that included a $2 million wedding, the once prosperous populace retreating in fear as their possessions were stolen or escaping by the hundreds of thousands to avoid maiming or worse, murder.

Similarities between the earthquake of 2010 and the one two Saturdays ago are eerie. Both occurred along the same fault line. The first was 7.0 on the Richter scale, this one only .02 stronger.

The people of Haiti need our help now more than ever. Yet we seem paralyzed, unable to find the get up and go to get up and help. And we ask why.

There is an answer, of course. We have our own crises to deal with. We are COVID-exhausted.

Our health care system is teetering on the brink of collapse.

We have had to borrow money our grandchildren will still be paying interest on to service the debt. We are short on ideas to fight climate change and out of energy in general.

All of those are reasonable explanations for why we have not mobilized. But are they explanations or excuses?

The truth is we have been so absorbed by saving our own lives we have lost a piece of our humanity that awakes in each of us a sense of responsibility for helping others who are trying to save theirs.

The strange history of election signs

OK, if you know anyone, I mean anyone of any political persuasion who has not noticed that the landscape has taken on a very colourful hue in recent days, please suggest they make an appointment with one of the many good eye doctors in The Bahamas. But if you think what is happening now is all that different – other than in profusion – from what has happened before, a quick tour around Google helps set the record straight.

Printed political propaganda may date as far back as the Romans. Back then, the writing was on the wall.

Here’s an early sign Scientific American dug up and translated: “I beg you vote for C. Julius Polybius for aedile. He makes good bread.” Sounds like as good a reason as any to vote for a candidate. And a more sophisticated one though I have no idea what it means, but it sounds important: “I beg you to vote for M. Pupius Rufus for duumvir with judicial authority; he deserves public office. Mustius the fuller supports him and whitewashes (here), the sole writer without the other members of his guild.”

In the US, the earliest record of a presidential plea to ‘vote for me’ by printed signage is attributed to John Quincy Adams in 1824, whose father had been President a few terms before him. It wasn’t the posting of signs that set the second Adams apart, though it is interesting that he was the first to recognize the benefits as they obviously worked and he got elected. History remembers him, among other things, for asking the members of Cabinet from the previous administration to stay on. He probably figured they had learned their jobs by then and could be useful.

What does set the signs we see today apart from the past or from those in our neighbouring country to the north is that they are posted by the party and we just assume that is the way it is, forgetting that in the US, individuals plant signs in their yards for the person, cause or campaign closest to their heart and Lord help them if someone else comes along and plunks down a sign for someone they don’t support. Neighbourhood fights break out, police have to be summoned.

All I know is whoever gets the contract for the clean-up after the election will be sitting pretty and so will the countryside. Maybe they can collect some of those other signs at the same time, the ones offering passport photo, scaffolding or lawn services. Expression of support during election season is short-lived and understood, an outlier for random signage for all those businesses that abuse trees, utility poles and public spaces and should be fined instead of supported. Now, about that clean-up contract… and, oh yes, one more small thing. I hope a local sign company got the work from both parties. Every economic boost is a good sign. Or is that every sign is a good economic boost if it is only up temporarily?

"The truth is we have been so absorbed by saving our own lives we have lost a piece of our humanity that awakes in each of us a sense of responsibility for helping others who are trying to save theirs."

Exactly. We have our own problems and Haiti don't practice birth control. They've had so much disasters, but they just keep popping em out like the world is a bed of roses. Every dollar sent to Haiti results in 17 new births, studies have shown.

Lady, one more thing. The new marijuana legislation hasn't been signed yet, so ease up on the spliffs. Ok?