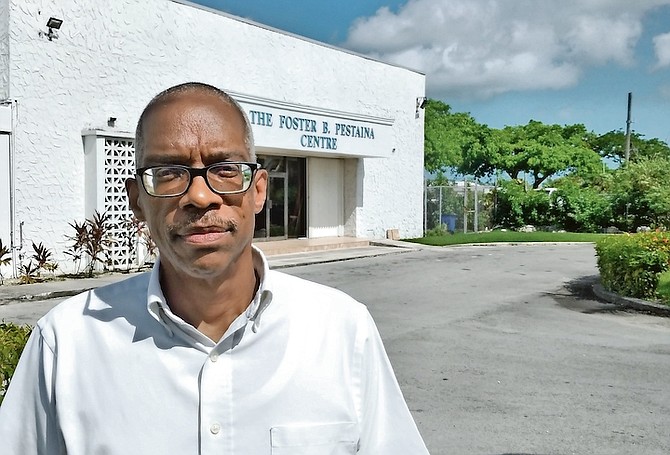 DANNY DAVIS, of the National Vaccination Consultative Committee, announced the rollout of the Pfizer and the J&J vaccines at the Christ the King Hall on Saturday and Sunday.

THE roll-out of the Pfizer and Johnson & Johnson vaccines will start this weekend in Grand Bahama at the Christ the King Hall, where already 1,000 vaccination appointments have been booked for Saturday and Sunday.

Danny Davis, of the National COVID-19 Vaccination Consultative Committee, reported that both vaccines also will be available at the Susan J Wallace Centre starting Monday, representing another 1,200 booked appointments.

He noted that three other vaccination sites have also been designated in three settlements, including Eight Mile Rock, Hunters, and West End, starting from Monday and Tuesday of next week.

“We are trying to do a mass rollout, and…we are actually going to be in operation administering the vaccines on Saturday and Sunday of this week at the CTKH. We have 1,000 appointments booked already, and we are taking walk-ins.”

Mr Davis said vaccinations on Saturday and Sunday will be administered from 9am to 4pm at Christ the King Hall. He stressed that persons with an appointment should arrive at the allotted time and not several hours before.

Mr Davis suggested that people arrive at least 15 minutes before their appointment time.

The Central Zion Baptist Church, in Pinedale, Eight Mile Rock, will be open for vaccinations on Monday between 9am to 7pm, and on Tuesday, from 3pm to 7pm.

In West End, people can go to the Mary Magdalene Church Hall on Tuesday between 9am and noon.

In Hunters, vaccinations will be administered at the YMCA on Tuesday from 3pm - 7pm; and on Wednesday from 9am to noon.

Mr Davis said the aim is to make it convenient for everybody to get their shot with times scheduled for morning and afternoon hours.

The Pfizer vaccine is a two-dose regimen that has a three-week interval between the first and second doses. The J&J is one dose.

The AstraZeneca vaccine is also a two-dose regimen that has a seven-week interval between doses.

With the rollout of the two additional vaccines, people will be fully vaccinated in a short period, reducing the spread of the COVID-19 virus.

“That helps us all in terms of reducing the spread of this disease. At this point, we have seen hardly anyone who has not been personally touched by COVID-19, whether it is just illness or death of a relative, close friend, or neighbour. It is affecting us, and this is one way to slow the spread of this COVID-19 virus in the country, and the GB rollout is our commitment to getting more shots administered to persons.”

He said people can choose which vaccine they would like to get when they book online.

“A person who would have had AstraZeneca as the first dose can get Pfizer as the second dose, or the AstraZeneca,” he added.

In terms of vaccinations for minors, the Pfizer vaccine is the only one in the country that is approved for children 12 and over.

A parent or guardian must consent to the minor getting the shot and accompany the child to the vaccination centre.

According to Mr Davis, there are over 100,000 doses of vaccines in the country today, with more coming.