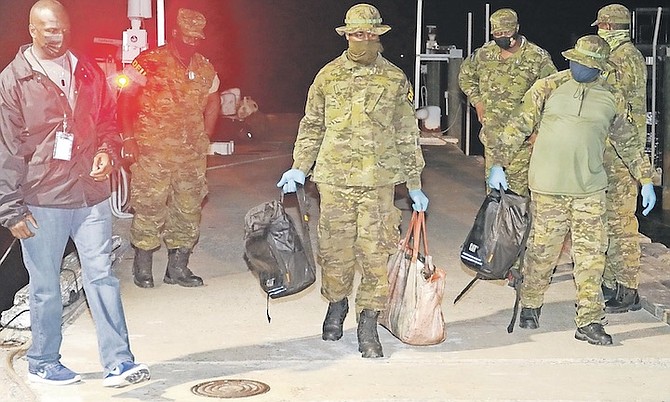 THE RBPF Marine Division in a joint operation with OPBAT, DEA and US Coast Guard personnel intercepted a vessel in the area of Long Island containing 24 kilos of suspected cocaine with a street value of around $500,000. Two suspects who are nationals of Venezuela and the Dominican Republic were detained. Photos: Donovan McIntosh/Tribune Staff

A SUSPECT being held by officers of the RBPF Marine Division last night. 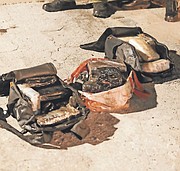 SOME of the suspected drugs seized near Long Island.

A JOINT operation with local police, OPBAT, the US Drug Enforcement Administration and US Coast Guard netted a large quantity of cocaine in the Long Island area yesterday.

Police said a vessel was intercepted in the area and after a search, a large quantity of cocaine was discovered.

The suspects and drugs were brought to New Providence last night.

Very deceptive in not saying neither of the suspects were Bahamian. Just another attempt to paint this country as a drug transshipment country when a very small amount of the 800,000 metric tonnes of cocaine that enters the United States pass this way. New York and California are the major entry points and most of the drugs enter in licensed cargo vessels. Yet brainless and uninformed law enforcement officers here willing to kill or send someone to jail for half a joint. Compare what they confiscated to 800,000 metric tonnes. That’s like a handful of sand compared to ALL the sand on the beach, duddy.

It was stated above that one individual was from Venezuela and the other is from the DR. See the caption under the big picture.