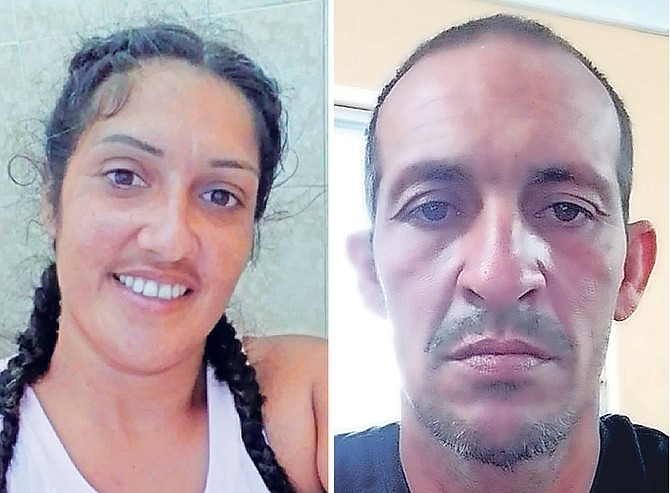 THE government has been ordered to prove it acted lawfully when immigration officials detained a Cuban couple who sought to seek political asylum in The Bahamas after fleeing their home country for fear of persecution.

Court documents state that Maikel Rodriguez Jiménez and his girlfriend Nathalie Palacios Morffis escaped from Cuba because of political persecution and victimisation, prompted by their “civic and political activities” which oppose the current Cuban government regime.

In an effort to avoid political persecution and incarceration, the activists fled Cuba in a vessel, with the purpose of reaching Miami, Florida or any other jurisdiction that would grant them political asylum and a “life of democratic freedom’.

Both Mr Jiménez and Ms Morffis have applied to the Bahamas government for refugee and political asylum status. However, after their vessel was apprehended in Bahamian waters, they were arrested and detained at the Carmichael Road Detention Centre where they have been since September 7.

Senior Justice Bernard Turner’s order said the respondents have until December 2 to file a return explaining the reasons Mr Jiménez has been detained for more than two months and proving why he should not be released immediately. He also said none of the respondents, or a person or agency acting on their behalf, would be allowed to deport, expel, remove or repatriate Mr Jiménez from the country until the matter was completed or a further order was issued.

In another court action, Justice Turner also ordered the respondents to allow Mr Jiménez, who is currently suffering with a broken foot, to speak with his attorneys who have had trouble meeting with him at the detention centre.

Callenders & Co contend the government continues to “falsely imprison” the Cuban national in breach of his constitutional rights, since Mr Jiménez has not been taken before any court in the country, has not been served with a deportation order nor charged with an offence.

“Both (Mr Jiménez and Ms Morffis) took part in the widespread and unprecedented protests against the Cuban government in July 2021,” they explained in court documents. “As a result of his involvement in the demonstrations in or around the city of Camaguey, Mr Jiménez was harassed by the Cuban police and forced to go into hiding along with Ms Morffis until August 24, 2021, to avoid being detained and incarcerated for their political opinions and activities. His family was harassed and threatened with imprisonment for not giving up her whereabouts.

“... Both were known to police in Cuba and were convinced that remaining in the country would have resulted in arbitrary incarceration. Both have applied to The Bahamas government for refugee and political asylum status... Both are now asylum seekers requesting refuge and protection in The Bahamas, as they fear for their lives, freedom, well-being and safety if they are removed back to Cuba.”

Living under a clout of fear of government persecution, didn't exactly fade away that saw the 1966/67 political fall of the Bay Street Boys/UBP....We just kina artificially skin-bleached some the comrade brothers.
We only moved for change, slightly by replacing the printing of the Wheel of Progress with the Crab and the Torch printed against the backdrop new political colours on T-shirts and everything else like this and that, ― **tis de trut', ― Yes?

hmmm... but what was significant about their participation and how many were involved in the demonstrations? Could all of them apply for asylum in the Bahamas? This is a tough one, The Bahamas has a gigantic wave of unemployed homeless, abused citizens who have been unassisted since Dorian/COVID. And the reason many go unassisted is the individual who arrives on a raft has to be deemed more vulnerable than they who "might" have some tenuous possibilty of family help. If Haiti, Cuba Jamaica China and the Eastern block are targeting the Bahamas, the world must give better assistance. The Bahamas is incapable of bearing this burden

If Cubans think they can get asylum here we'll get overrun.

How does asylum work who provides a place for them to live and what about employment?

The drama King is at it again

I don't think the US would be very happy if at some point we have 50,000 Cuban asylum seekers living here.

Its all well and good saying we can't take them on, but if that's the case we should have never signed the protocols saying we would. AS such we should now withdraw from these protocols. Or was this another case of us signing something because it made us look good but in reality we had no intention of abiding by it.

People are people , and not all drag a country down outsiders or insiders .... what would the USA be today if only the natives lived there , do you think they would have what they have ... without the Chinese there would be no gun powder no fire works maybe no steam engine maybe no gas engines ... we could be riding horse and sleeping in tents every man has his worth ... stop always throwing blame. We grow our own as much as we let in. Check the jail is it full of outsiders or do most of them come from here.

People are people. That is correct. However; why should we be burdened with the woes of others when we are in turmoil? We can emphasize with other cultures, but what about us. Please, reflect on Abaco and Grand Bahama. We have practically been ignored. Should we put the rights of our citizens below those of possible riffraffs who incite problems in their own countries and then bring their possible poisoned mentally to our country? Why should we allow them here? A perfect example, look at Haiti and the destruction its citizens are creating for themselves. Should we not consider the caliber of persons we allow in our country?

Some youse comrades, suffer from ignorance about how there were times when we own family members by the many thousands of black colonial subjects had sailed away from we's UK Colony in search of earning paycheques.
Yes, some even sailed aboard dinghies with makeshift sails in search of Haiti's booming job opportunities' and lots everyone's numbering 30,000+ had headed to the USA, including Cat Islands, Sidney Poitier, ― Yes?