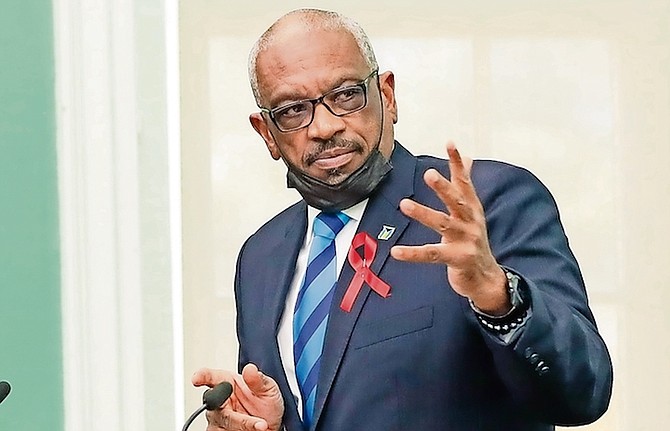 FORMER Prime Minister Dr Hubert Minnis said a terrible message will be sent to the international community if Johnson & Johnson vaccines expire at the end of the month before the shots go into arms.

He said The Bahamas will likely struggle to get additional vaccines if this happens.

His comment came after Health Minister Dr Michael Darville said on Tuesday that 20,000 J&J vaccines are set to expire at the end of this year.

Nonetheless, Dr Darville said yesterday that the vaccination committee believes vaccinations will increase during the holiday season and it is working on a “community and social mobilisation” to boost vaccine uptake.

Dr Darville said The Bahamas has reached the point where it is clear that those strongly interested in getting the vaccine have gotten it already. Some people, he said, are on the fence while others are strongly opposed and will not get vaccinated.

“That’s what every country is facing,” he said. “With the social mobilisation we are going for those individuals who are on the fence and what the country will see is new innovative ways to get people to come forward. We believe that by partnering with the private sector to give away gift certificates and going into a situation where we could have draws.

“One of the ways you target the groups is by offering incentives where they come to the centre, they get vaccinated and they get a gift certificate. Maybe a phone card, maybe food or it may be something else. And then combine with that we’re planning to offer the ability for their name to go into a pool and then there is a drawdown where you determine who is the winner. This is very important and has proven to be very effective in other parts of the world.”

For his part, Dr Minnis insisted officials have not heeded his warnings about the implications of the slowing vaccination rate and did not have contingency plans in place.

“If we have to discard vaccines it sends a terrible message to the international community, the Americans and others who I’m certain are monitoring our vaccine utilisation and I am certain it would be very difficult moving forward for us to obtain vaccines,” he said.

“When the J&J vaccines were purchased, they were purchased by the African platform in conjunction with CARICOM and we paid a deposit of $45k. The aim was for the vaccine to be utilised, especially in the Family Islands, the prison, detention centre and facilities like that.

“My records would reflect that they were only utilising about 30 per week, which meant that if you did the calculation they were doing about 4.2 J&J vaccines per day. Just reviewing that would inform them that they would run into serious problems.”

Davis administration officials say they met great reluctance to the J&J vaccine when they entered office, saying people preferred to get the Pfizer shots.

Dr Minnis said: “If they were monitoring this properly, they would’ve made contact with other nations that have J&J, see where their expiration dates are and do an exchange as opposed to throwing away the taxpayers’ money, with us having already paid $45k as deposit and that was only 15 percent deposit, with more outstanding monies to be paid and possibly 20,000 vaccines to be thrown away.

“I think that’s very embarrassing to the government and it sends a terrible message to the international arena that The Bahamas whose vaccination rate is probably about (less than) 50 percent is about to throw away or discard vaccines. I would hope they are in communication with some other territory that utilises J&J and see whether they can do an exchange and subsequently extend the vaccination period.”

Dr Minnis also said he is concerned that the Davis administration is permitting Christmas Carnival activities this season. He said the government would be ill-advised to allow the fair to take place, considering many patrons will be children who are too young to be vaccinated.

“What alarms me as I drive past Clifton Park coming to Parliament, I see that carnival is being set up,” he said. “The government must be very careful in allowing such close contact with Omicron being in the US. It’s only a matter of time before it comes here and it’s still under review, but it appears it is very infectious and young people who will be utilising the carnival facilities, those young people are not vaccinated.

“It’s very ill advised and I don’t know whether the government has consulted the medical fraternity on a decision on the carnival. I think it’s ill-advised, especially noting that countries are locking down and Omicron is moving throughout the world very swiftly.”

Dr Darville, however, said carnival representatives are meeting the Ministry of Health’s protocols and that officials will increase oversight to ensure their rules are followed.

“We’re trying to encourage commerce and it’s a very difficult thing to do,” he said.

Dr Darville said there will be consequences if protocols are not followed.

What do you suggest? Running through the streets and randomly kidnapping people, asking if theyre vaccinated then sticking them? If your messaging had been better and you hadnt talked to Bahamians like chirren perhaps more would have trusted you and been vaccinated

Minnis the monstrous brain-dead tyrant would by now have had our young children and grandchildren strapped-down and unnecessarily jabbed multiple times with these experimental mRNA vaccines had 'his' FNM party won the last national general election.

Voters in the Killarney constituency who voted for this bozo really should be embarrassed that they allowed such an imbecile to remain in the House of Assembly. And the FNM party certainly will be going nowhere for as long as he keeps spouting his rubbish and nonsense on the floor of the HOA.

You seem to enjoy bleating more than most sheep so easily led to slaughter. LOL

lol he really should sit quiet.

Comrade Pintard, if youse plan is to separate this man's from his Killarney House seat, youse goin' need tree brains of Pindling political skills to separate this man's from the red party's Killarney House seat and everything else like this and that.
Good luck, youse goin' need lots it cause that still leaves that other equally contentious problem, the House member for Long Island, ― Yes?

You're ignoring Mr. 999's advanced age and serious other medical conditions he had at the time which made him especially vulnerable to the Communist China Virus. A serious bout of seasonal flu could just as easily have taken him down. Rest his soul.

Unnecessarily subjecting everyone to jabbings was a ridiculous proposition from the get-go based on the early data that identified the most vulnerable segments of society. Power grabbing politicians and deep state bureaucrats, population control freaks funded by evil and sinister globalist billionaire oligarchs and their greedy big pharma friends and bio-tech partners, all wrongfully ignored the science and decided to treat the rest of us as 'deplorable' and expendable guinea pigs.

Most people by now have been infected and recovered, many without even knowing it. The natural immunity they have is much stronger and longer lasting than any immunity they would get from being unnecessarily vaccinated with these experimental mRNA vaccines which offer only waning or limited duration protection. Getting unnecessarily vaccinated means you become a member of the Vaccine Dependent Global Society, needing jab after jab of whatever for the rest of your life.

Good luck with that!!

Hopefully you will not get sick with COVID.

FICTION: Read any of tribanon's posts...

Thanks Freeport for pointing out tribanon's stupidity .... science and facts are our friends

Didn't you hear Fauci recently declare to the world that he is the science? You can have him all to yourself. LMAO

The natural immunity they have is much stronger

Based on today's news, natural immunity from having had COVID and recovering, is not much use against the OMICRON variant.

Check your source. Natural immunity remains the best protection you can have against all of these scariants.

The number of Bahamians who wish to take the vaccine seems to have plateaued ..... Good luck with the Govt in trying to increase that jab rate

Perhaps they can send the vaccine to Haiti and not allow it to waste,

Why Haiti. The Haitians told them from day one they didn’t want that ca ca! Send it to European or back to aAmerica. Apparently they don’t want them either.

That's probably why Haiti is on the USA's do not travel list because of its refusal to vaccinate their population.

Or offer it to Haitians here, without Immigration standing by......vaccine amnesty?

That is a small amount of vaccines that will go to waste compared to what will be dumped worldwide after December 31. Most people who wanted to get vaccinated have done so. And the stronger the authorities try to twist some people’s arms, the greater the resistance will be.

says the guy that ordered them? hush...

Most USA Supreme Court Judges have let the air out of Bidens maditory vax balloon as simply unconstitutional to enforce. WHO should sanction the opposition for spreading misinformation,panic and fear. The Bahamas medical mafia are trying to recoup prospective millions in PCR testing reinforcement for the travel industry sending many hotel workers back to the food line while they rake in billions.