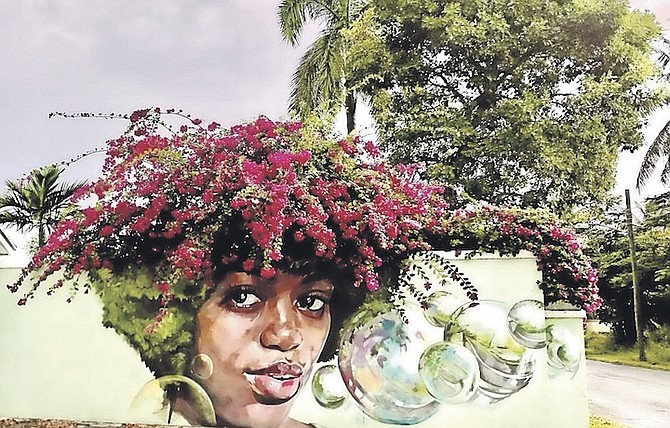 THERE’S a new reason to smile while driving along Eastern Road. It’s a painting of a young woman with eyes like giant saucers, glowing cheeks and silken skin, a face of innocence amid a swirl of bubbles. Artist Allan P Wallace transformed the erstwhile ordinary cement block wall on the north side of the busy street, adding colourful joy that captures our gaze and lifts our spirits as we pass. Wallace, who studied under Antonio Roberts at the then College of The Bahamas, has taken his large mural talent to several sites in Nassau, including the long wall at the National Art Gallery. With his latest work on a strip of residential roadway, he awakens in us a desire for more street art at a time we are hungry for happiness and grateful even if it comes in fleeting doses.

The portrait of the young girl awakens a thirst for more art in public places. Seeing Wallace’s portraiture on a wall where it is free and open to the public at all hours, we ask ourselves, why must we go to a museum or gallery to ‘visit’ art?

Natural art is everywhere, in the draping of a deep purple bougainvillea, the ambitious climb of tiny green leaves on a dilapidated wooden fence. Natural art does not discriminate, nor should that which is created by the hand of man, woman or child.

Interestingly, a growing number of cities around the world are discovering the intrinsic pleasure of a feast for the eyes also beefs up their economy. Art in public places attracts visitors, encourages new businesses, especially those catering to a young professional crowd, and boosts revenue along with quality of life.

Nowhere is that more evident than in Wynwood, a neighbourhood that once served as part of Miami’s flourishing garment district. A mixture of warehouses and housing for the Puerto Rican labour that made Miami one of the leading clothing manufacturers in the 1920s, Wynwood was known as Little San Juan. Over the years, as factories moved to places like New York, New Jersey and Boston where new immigrants were cheaper to hire, Wynwood’s warehouses emptied. They became windowless, dark, dank, multi-level vacuous hellholes. Parts of Wynwood were so rough you had to be tough just to drive through and praying wasn’t an unreasonable reflex. That is when the early graffiti started.

The first to use a wall might have done it out of frustration, anger, a release of emotion of some kind. Then, in 2009, two men, Tony Goldman and Jeffrey Deitch, saw the abandoned warehouse walls of Wynwood as giant blank canvases on which to create what Goldman called “the greatest street art ever seen in one place.” He started with a two-block area, invited artists and a little more than a decade later, Wynwood Walls, Wynwood Doors and the sidewalk cafes and galleries of the art district are legendary.

At one time before the pandemic, Wynwood boasted of 70 art galleries. This week Wynwood was in the spotlight again as part of Art Basel, the citywide art show that naysayers dismissed, saying it would never work in a cultural vacuum like Miami and now is the largest art exhibition and sales event of its kind in the world. As one journalist noted, Art Basel is where the wealthy meet the super wealthy. The event brings tens of thousands of visitors who leave footprints in the sand and millions in the city’s business and hospitality coffers.

Nassau is slowing waking up to the value of art in public places. Graycliff’s colourful display of hanging umbrellas over West Hill Street, the recent art on the walls of a small outdoor bar just east of Mackey Street on Bay, Allan P Wallace’s work elsewhere, even in the least likely spots, is all making a difference, paving the way, I hope, for more to come. For unlike the billboards which adorn another property on Eastern Road much to the anger of residents who feel betrayed by the man who allows it, art is good for the soul and Lord, know we are grateful for every little bit of feel-good that comes without a hefty price tag this year. Thank you Allan P Wallace for the early Christmas present you gave us. It’s a perfect fit, just the right size and colour.

Rolle on a roll

Congratulations go out to Central Bank Governor John Rolle for making the Bloomberg 50 list of those who made a difference in their field. The Governor’s support for the Sand Dollars and promotion of the digital wallet, critical in remote islands where traditional banking is unavailable, earned him the honour.

As banks struggle with 20th Century business models based on salary deduction consumer lending and increasingly look to fees to boost their bottom line, the public might be turning to Central Bank asking it to play another role – that of consumer protector. Meantime, it’s comforting to know that one of our leading thinkers has caught the attention of the world. Remember Bloomberg Green also lauded Beneath the Waves for their marine resource work that included The Bahamas.

Sad farewell to Silent Partner Skipper, King of the Waterfront

Lundy Robinson, the man dubbed King of the Waterfront in a column earlier this year, died suddenly of a massive stroke on Monday, sending shockwaves and disbelief throughout the sailing and marine industry community. Tough sailors who competed against him in regattas from Mayaguana to Grand Bahama called each other, openly crying over the loss of a man his brother, Clyde Rolle, called “a quiet giant.” He was the epitome of the man of the sea, working the boatyard by day, racing native sloops at every regatta. Lundy skippered every class of sloop, his famous red hull Silent Partner and Red Stripe in A class, Crazy Partner in B class, others in Class C.

He was 16 when he started working on Nassau’s waterfront. He stayed for the next 53 years, driving a travel lift, hauling boats, squeezing them in like “a living jigsaw puzzle” on the concrete pad where they would be repaired, refinished, painted and ready for him to re-launch. Lundy loved his work, never knew what it was like to wear anything but his white V-neck t-shirt, Sportif shorts and baseball cap.

To those who worked with him, he was the soft-spoken man of few words who always got the job done no matter how early or late, how complicated, or weather condition, an unsung hero whose hard work made others’ pleasure possible. Lundy Robinson, a man to whom the sea was his earth and whose dedication and sportsmanship shall long be remembered. Maybe now, native sloop sailing will become the official national sport of The Bahamas, and Lundy, wherever you are, we will send word on a wave and feel your spirit at the start line.