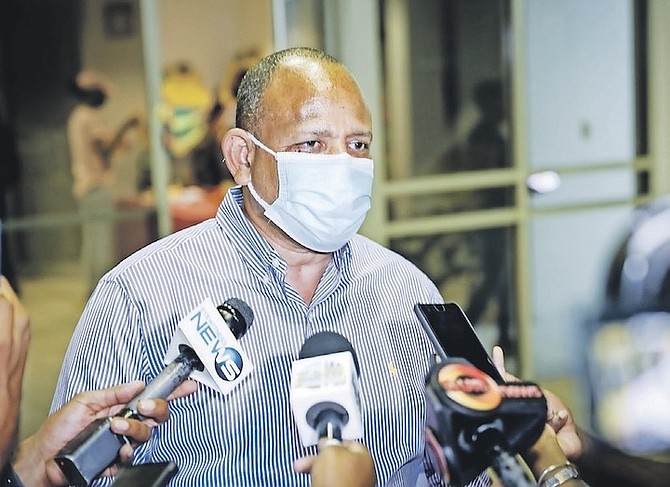 FORMER Health Minister Dr Duane Sands is warning health officials not to make the same mistake with the Omicron COVID-19 variant as they did with the Delta strain, saying this new threat, if not here already, might be in The Bahamas “fairly soon”.

Dr Sands said the government should tighten travel restrictions, requiring those entering the country to present a negative PCR test taken no more than 72 hours prior to departure.

The Omicron variant, which is now popping up in countries all over the world, was first identified in Africa. Several countries, including The Bahamas and the United States, have subsequently banned travellers from those African nations.

Dr Sands said although the real threat of Omicron is still unknown, Bahamians should be, “hoping and praying for the best, but preparing for the worst.”

“If you remember the whole discussion about Delta, we kind of had our head buried in the sand for weeks saying that we haven’t proven it to be here,” Dr Sands said.

“You can’t prove it if you don’t look for it. Given the fact that this variant is all over the United States, all over Europe, in a number of places in Africa and so on, there’s no reason to believe that if it isn’t here, that it’s not going to get here fairly soon. We ought to be hoping and praying for the best, but preparing for the worst.

“As to what clinical threat it is, I think it’s too early for the world to know. Scientists all around the world are very concerned about this variant and the fact that it has so many mutations that we don’t know how well we will be protected by vaccines or by previous infections with other strains of the coronavirus.”

Dr Sands pointed out that the Omicron variant was already outside of southern Africa by the time the alarm was sounded. He said it’s the same way the Wuhan version of COVID-19 had spread outside of China by the time the world first learned about it.

“What we learn then is that travel bans really didn’t help,” Dr Sands continued. “We did it because we didn’t know where we were, but hindsight should demonstrate to us that as a public health tool, it probably has limited utility. What would have real utility is beefing up your public health adherences and getting your population vaccinated.

“Even though this variant has multiple mutations on the body of virus as well as the spike, preliminary information is that there is some protection that is afforded by vaccinations and boosters.

“As our understanding of this thing evolves, then we also need to move along in terms of our vaccination programmes. One thing that has happened, even in the setting of relatively low numbers is you’ve seen the adjudication in the causes of deaths of patients.”

The Bahamas has confirmed more than 700 COVID-19 deaths, which Dr Sands said puts the country “in sad company” in terms of its overall experience with COVID. That equates to about 1,600 deaths per million which is not ideal, he said.

“Pound for pound we are underperforming the rest of the world and I think Bahamians ought to take note and particularly as this Omicron variant now is threatening,” he continued.

“This ought to be our wake up call. We did poorly with Delta so let’s not gamble with Omicron.”

Shifting gears a bit, Dr Sands spoke of what he thought should be an adjustment in the country’s testing rules for travellers.

“We should move to PCR testing to all travellers vaccinated or unvaccinated – citizens, residents, visitors— and to reduce the time of these tests to 72 hours,” he said. “Whether we want to be more aggressive and reduce that time line to 24 hours, I think puts a pretty logistical hardship on people, because sometimes it’s almost impossible to find a place to do a PCR depending on where you are.

“So 48 to 72 hours is certainly more reasonable than five days. We should move away from antigen testing alone. The approach that we have taken to restrict travellers from certain jurisdictions is more symbolic than anything else and probably will have no significant impact on whether or not we wind up having the Omicron variant in The Bahamas.”

Currently any person wishing to enter The Bahamas must present a negative COVID-19 test no older than five days. Vaccinated travellers have the option of taking an antigen or PCR test.

Recently, Dr Sands predicted there will likely be a fourth wave of the virus heading this way. His position has not changed and he reminded Bahamians there has been no “all-clear” given on COVID-19.

“A word to the wise is sufficient. We cannot pretend as a country as if there has been an all-clear. There has been no all clear from any agency by any indication.

“I think what we ought to do is push aggressively to get more people vaccinated. We ought to ensure that people understand the principles of public health interventions that they ought to be adhering to and they are doing the right thing in terms of avoiding indoor carousing.”

He said although inconvenient at times, COVID-19 interventions work.

De judge just sentenced Myanmar's ousted president Aung San Suu Kyi to prison for breaking Covid rules and everything else like this and that, ― Yes?

THEY ARE HYPOCRITES!! Earlier in the year , Anthony Fauci was asked if he thought the Covid-19 virus would be around forever. Fauci said ‘NO’. He believes the virus will weaken and become like a seasonal flu and so there may have be a booster for flu shots. NOW this is the EXACT same thing that is happening with the Omnicron strain. But FAUCI dem say no, it’s too early to tell. The Omnicron can develop into something substantial and of concern or it can just fade away. But in the meantime get vaccinated, take your booster shots, vaccinate your children.. it’s the only way to protect yourself he says. Then go scoop all the salt out da sea! AND DUANE SaNDs seem to have been invited to the wrong party. AGAIN!

"If you remember the whole discussion about Delta, we kind of had our head buried in the sand for weeks saying that we haven’t proven it to be here,” Dr Sands said."

You may have had your head buried in the sand. By April I was saying something different is happening. This could be a variant. Renward Wells proudly proclaimed in May was it(?) that 4 samples theyd sent off from January or so returned and there was no, I say no evidence of COVID variants in the Bahamas. I remember quite clearly one talking show host and sidekick laughing and saying ~"you hear that all you conspiracy theorists? No evidence of variants!"

What I say now is Omicron appears to be hyped. But Dr Chetty did describe a phenomenon of an early mild response seen in young people only to be followed by a more severe reaction in the 2nd wave. He explained as I believe the body now recognizing the virus and launching a more aggresive attack. So who knows. Id say this one is a dud so far, but keep close eyes on the data... Eorrisome that we still have counts of 10 people dying in a week... and some are fairly young

Truth be told Covid 19 is a mystery from hell. No one really understands

It may be a mystery from hell, but they understand it better than you think. Ways better. Early last year and even while Anthony Fauci was denying that this virus was manufactured in a lab and may have ‘escaped’ from the lab in Wuhan, China, I made a number of posts about how the Covid-19 was so similar to the Spanish flu. Then there were posts about how in 2015 and 2017, a scientist had made his way to Alaska and dug up dead people who had died from the Spanish flu. In the first instance, he removed samples of the virus and in the second instance, he took an entire lung containing the virus. As you know the ground in Alaska is fully frozen so the dead bodies and the virus were fully preserved. Well at that time, I was labeled a conspiracy theorist and several people disputed my posts. One claiming to be a Dr said the Spanish Flu was completely different from Covid-19. because one was a flu and the other a virus. Then facts slowly came out that Dr Anthony Fauci was, in fact, doing or involved with ‘gain of function’ Covid research in the lab in Wuhan, China. Gain of function is when one tries to make a virus more deadly or more transmissible. Bio Weapons . It was further revealed that The scientists who went to Alaska to collect the Spanish Flu samples were linked to Fauci and his ‘gain of function’ research. It was further revealed that Fauci had conducted similar experiments in the United States but he was ordered to ‘cease and desist’ any and all experiments on American soil before they were considered too dangerous. An obvious threat to the human population. In fact, Fauci and the counterparts were also ordered to stop these experiments in the same Wuhan lab in 2017. Again they were considered to be too dangerous. But Fauci found a way around the ban. He claimed he was trying to develop vaccines for corona viruses. So the research went on. Then in late 2019 several of the scientists working in the Wuhan lab became ill. They were rushed to the hospital with breathing problems. Then there were student athletes on tour in China, who also became ill. And as China fought desperately to put out the fire, Fauci chose to do damage control rather than put the world on alert of a possible deadly and highly transmissible virus. A global pandemic just days away. Fauci maintained that the strange virus in China came about because of people eating bay meat. And as thousands died around the world, Fauci continued to sit on the facts. He even lied to the President of the United States. At some point and despite his own views about the virus, Trump did not trust Fauci. He wanted to fire him even.

The PFLMPN medical mafia has teamed up to enchain our tourist product and educational system to their profits not health and recovery for Bahamians.

When both parties are singing the same lullaby we should just close our eyes and go to sleep knowing we are in good hands as our money rests on the table.

Did not begin in China but Protease Inhibitor ivermectin sure destroys it at the slightest slightest onset. So too Hydroxychloroquine. Trump said so. F4 said no and the press made Trump appear the fool. Millions died F4 lied.

Quote of the day/year:

Sands looking for attention man smt. I have been saying keep an eye out, next year covid will be simple as a common cold, they will swear the made a mistake n the pandemic is over.

If so, that can't happen soon enough, but I fear there's still plenty good money to be made. The pols, big pharma, et al are hanging on to the virus and it's variants for all its worth. Every time it tries to retreat, up pops another one!😒

so right well at least Bill Gates hit his target, now the richest man, before he was all over pushing the vax, now you cant even see him. Money good na.

It is said the vax are now creating new streams, so just an assumption but maybe the vax is what is causing rona to stick around soo long.

I will take Mr: Fauci over Trump every time.