THE Supreme Court has ordered Coalition of Independents leader Lincoln Bain to pay $64,000 to a woman after finding he did not invest or return the money she wanted him to hold in a trust for her for three years.

In deciding the case, Justice Cheryl Grant-Thompson found that a witness Mr Bain brought was not credible after the man testified that he had forged Mr Bain’s signature on the agreements solidifying the transaction between Mr Bain and the plaintiff.

“I am of the view that the allegation of forgery was a story that was made up in an attempt to discredit the documents produced by the plaintiff,” she noted. 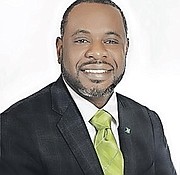 Zinnia Rolle, the plaintiff, claimed two agreements were breached, one dated April 20, 2010 and another executed on April 23, 2010.

According to the judgment, Ms Rolle rented from Mr Bain, who was the president and partial owner of a company on Mackey Street, “an emporium which operated in the sale of women’s retail, wholesale shoes, apparels and other consumer items.”

Mr Bain, who was a candidate for Pinewood in the September general election, is the first defendant in the matter and Bani Shoe Warehouse is listed as the second defendant.

Ms Rolle said she paid Mr Bain “$40,000 for investment purposes to be held in a trust for a period of three years at a 10 percent interest rate per annum.”

According to the judgment, Mr Bain agreed that he had received $40,000 from the plaintiff, but he claimed the money was to buy the Kid’s Shoe Department Store from Bani Shoes Warehouse Company Limited. He did not, however, produce any agreement verifying this and said the document had been destroyed in a fire.

In fact, he claimed he did not sign any trust agreements and that his signatures on documents the plaintiff produced were forged.

During cross-examination, Mr Bain claimed because he knew he didn’t sign the documents, he began tracking down former employees of the company who had information about what happened.

According to the judgment, Mr Bain claimed during the trial: “…I was calling around different people. But (Keno) was the one who had the same number, same email, so I got him easier. And so, when I got him I told him what was going on. And he told me, he said he had something to tell me. And that is when he confided in me. I then in turn told him that this is serious. And I told him that I may be pressing charges. And he said, he understand. And I brought him to see the lawyer, my lawyer who told him that it could be fraud charges involved.”

She wrote: “Whilst I did wonder why Mr Keno Symonette would openly admit to a criminal offence in the face of the court, I did not find Mr Symonette to be a believable witness; the nature of his evidence and his demeanour lacked credibility. I note there was no claim the plaintiff was involved in this alleged forgery. It is crucial in law that she should have been involved in some way. Mr Symonette attempted before me to sign Mr Lincoln Bain’s name. It was a poor and not convincing attempt which did not even come close to Mr Bain’s signature.

“Mr Symonette was invited to sign Mr Lincoln Bain’s signature three times. He was allowed to refresh his memory from Mr Bain’s signature and he patently failed to do so on all three occasions. By contrast, when I compared Mr Bain’s signature on the agreements to Mr Symonette’s attempt to sign for Mr Bain in the presence of the court, I found the signatures to be totally different to the extent that they could be compared to day and night.

“Whereas Mr Bain’s signature on those documents were almost a replica of each other, I do not accept that Mr Symonette was the penman on any of these material occasions. His purported signature of Mr Lincoln Bain’s did not match the signatures on the agreements nor the witness statements, and they appeared to be nothing more than vain attempts made by the witness in the witness stand. I found by the completion of Mr Symonette’s evidence, both in content and demeanour, that he was lacking in credibility.”

Justice Grant-Thompson accepted the legitimacy of the agreements Ms Bain exhibited in the case and entered judgment against Mr Bain in the amount outlined in the plaintiff’s statement of claim.

She wrote: “The plaintiff denied ever having a conversation with Mr Keno Symonette. I found her a believable witness. She said that she only recalled seeing Symonette around Bani Shoe Warehouse when she went there for her businesses. She maintained clearly and emphatically that all of her agreements were signed by the (first) defendant Mr Lincoln Bain in the office of her then lawyer, Mr Willie Moss, and witnessed by Ms Butterfield of his office.

“The action of forging the signature of the first defendant allegedly done by Mr Keno Symonette is a crime punishable by imprisonment for up to five years. In my view the response by any reasonable right-minded individual who was entered into an agreement without their knowledge for an amount in excess of $40,000 dollars would be to immediately report this action to the police. Due to the severity of this offence there is no limitation period and the first defendant could have reported this matter to the police the instant it was brought to his attention. The first defendant did not do so and as far as I am aware has still not done so to date.”

She noted that for the reasons set out in her judgment, the forgery claim is dismissed.

“The lawyers just got that,” he told The Tribune. “They are definitely going to appeal that, they totally disagree. That is an old matter from sometime in 2010…We don’t want to comment on it because it is going through the courts and the lawyers are reviewing it now…This is a civil matter like all business people have.

“We totally disagree with the judgment and we are going to appeal.”