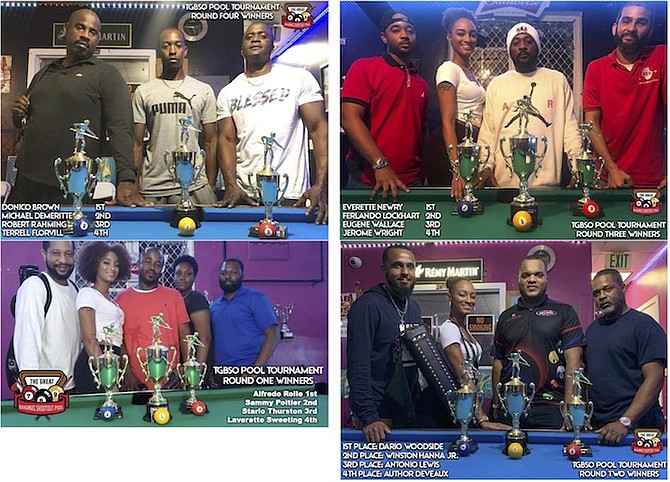 THE stage was set for an epic showdown yesterday as the Great Bahamas Shoot- Out Pool Tournament came to a close following four successful weeks of intense competition.

A full slate of players competed in the 16-bracket round one which saw Alfredo Rolle emerge as TGBSO round one champion, relegating Sammy Poitier to second place.

For winning round one, Rolle earned $200 in cash, a first-place trophy and a spot in the championship round.

Rounding out the top tier was Stario Thurston who defeated Laverette Sweeting to secure a third place finish.

Dario Woodside won round two, also earning $200 in cash, a first-place trophy for round two and a spot in the championship round. Woodside defeated Winston Hanna Jr who finished the night second and will be the fifth and sixth seed respectively in the tournament finals. Antonio Lewis defeated Author Deveaux to come in third place.

Everette Newry won round three and earned $200 in cash, the first-place trophy for round three and a spot in the championship round. Ferlando Lockhart came in second with Eugene Wallace finishing third. Rounding out the top four was Jerome Wright.

Donico Brown won round four, taking home $200 in cash, the first-place trophy for round four and a spot in the championship round.

Brown defeated Michael Demeritte who finished the night second to make it to the championship round of The Great Bahamas Shoot Out Pool Tournament Finals. Robert Rahming defeated Terrell Florvill to come in third place.

The top four finishers in each round earned a spot in the championship round in which they will automatically receive a medal, a chance to win $1,500, $700 or $300 cash, and the overall tournament trophies.

The Great Bahamas Shoot-Out Pool Tournament is intended to provide a safe, fun competitive environment for adults every Friday leading up to Christmas, according to a press release.

The pool tourney features a pre-happy hour, with DJ E.z.e from 5pm to 8pm and an after-party with a special invited DJ guest weekly. The tournament is being held at Da Chill Spot restaurant and bar, East Street South. The tournament director is Tavaughn Rolle from The Pool Table Guyz company.