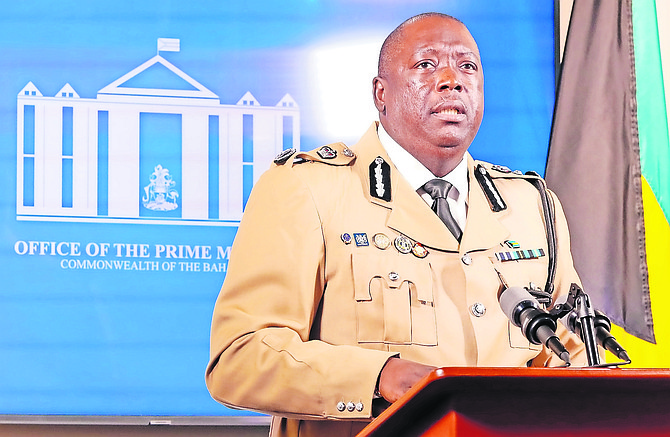 Police Commissioner Paul Rolle yesterday provided a breakdown of those promotions in response to a question from The Tribune about the awards to officers.

“We had a Deputy Commissioner, let’s start at the top, right, and two Assistant Commissioners,” Commissioner Rolle said of the promotional exercise during the Office of the Prime Minister’s weekly press briefing.

“We had 25 Chief Superintendents, two Assistant Commissioners, which is, you have seen Bernard Bonamy Jr and Mrs Dellareece Ferguson. Bonamy has responsibility for Family Island operations, Family Island policing, which is very big and Mrs Ferguson has responsibility for HR and training, which is also a huge feat and, like I said, also the 25 Chief Superintendents.

“There were 60 Superintendents, 87 Assistant Superintendents and 98 Inspectors and 325 Sergeants and 325 Corporals and I need another hundred constables to go in training, okay.”

Based on his breakdown, there were about 923 officers promoted.

Back in October, Commissioner Rolle suggested that promotions were in the pipeline.

At the time he said: “All of my police officers, colleagues, just to say thank you—not yet. I heard some rumblings about some things, but we’re not ready yet— soon.

“I know several of you are anxiously waiting for your promotions.”

He continued: “Let them know that I spoke with the Minister of Public Service this morning and I believe he’s watching.

“I kinda said to them, to nudge them to get my stuff, so we can move forward, but I know, tell them we’re gonna have a good Christmas.

Any promotions for those hard working Police Reservists who in addition to a fulltime job and family give of themselves day in and day out risking it all just as the full-time officers? Haven't heard anything for them. Just asking...….

Most reservists are retired or former police officers. What promotion do they deserve that they didn't get when they were active??? ...... Pray tell????

And the poor ba....ds have to wear masks all day and night while driving in the police vehicles.

do promotions include those with extra-curricular activities on Crooked Island?