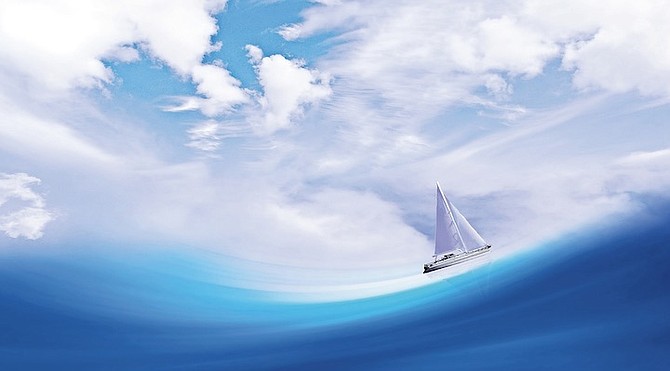 IN the groove, everything feels fast and right and perfect. You want to stay in the groove as long as you can because you are getting everything out of that boat’s performance that you possibly can.

IN sailing, there is something called the groove. It is not a place, well, technically, it is, but it is more a feeling. It’s when the wind is in your face, the sails are set and trimmed perfectly, main and jib in tight, going upwind heeling at 30-35 degrees, water rushing under you and the boat feels like it is powering itself, just flying along, which is really an oxymoron because the one thing sailing is not is fast.

But in the groove, everything feels fast and right and perfect. You want to stay in the groove as long as you can because you are getting everything out of that boat’s performance that you possibly can. You focus intently, yet contentedly, feeling the rhythm of the movement, sails out to starboard, wind coming steady and then suddenly, the sound of outboard engines gets louder and a powerboat zooms along the port side, crosses your bow and the groove, the perfect timing of wheel and will, of hull and happiness, of sail and wind, is lost.

You lost your groove, not for lack of performance or concentration or know-how or desire but to poor sportsmanship.

One gesture of poor sportsmanship is a thief of time and the destroyer of the pursuit of perfection. It’s not just boating. It’s hunting, fishing, football. But whereas on the field, the greedy get caught and punished, on the open waters or internal bays and lakes and harbours of The Bahamas – and there are hundreds – there is little to stop the rude from spoiling the day for the rest. No referee yelling “Unnecessary roughness, five-yard penalty, first down” rewarding the offended team. No one calling a penalty for holding or premature start. It’s our waters and we are supposed to police them ourselves which means we are supposed to be good sports. We are not supposed to be using oversized rigs in a fishing tournament or running jet skis near swimmers. We are not supposed to take more from the sea nor shoot in the air more than we need to eat. We are not supposed to flick the rooster tail of a fast boat, drenching a small dinghy because we are bigger than they are.

And though they are our waters and occupy nearly 9/10 of The Bahamas, we cannot expect the Defence Force - already overtasked with protecting borders and managing human and contraband smuggling - to stop a vessel because it displaced us from our groove.

All of this may sound like a bunch of hoo-hah, like, why are you even talking about this on the day before a new year when there are so many more important things we need to be discussing? That’s a very good question. And here is the answer. Because good sportsmanship is at the basis of everything we do when we get it right. It goes beyond courtesy.

It is the examples that fill us with hope. It is the head of the US Senate Harry Reid, who passed away this week, telling a young Barack Obama, still in his first term, to run for the highest office in the land instead of fearing that he will someday compete with him for position or surpass him.

Good sportsmanship is what makes one hungry brother cut a piece of chicken in half to share with his brother and then give all of it to him. It’s sharing and caring and not cutting in front of someone in a line or pulling out at a traffic stop and going around several cars stopped at a light so you can turn left on red. It’s not doing the wrong thing and pretending it is right or okay or maybe no one will notice.

People do notice. So even though it sounds trivial, with all the world wishing for an end to COVID and a return to normalcy, I wish for a world of gentler, better behaviour in 2022. Because when we all treat each other like the next person’s time and rights and needs are as important as ours, we can deal with whatever comes our way.

Maybe we thought the tough times brought on by COVID gave us an excuse to behave more rudely than usual because I have never seen a year of worse behaviour and that is the year I want to say goodbye to.

May 2022 be a year of better sportsmanship and kinder moments for all of us and yes, may it also be a year when the new normal doesn’t feel so not normal.

Being home this week has had its advantages like happening into an Ellen DeGeneres show and seeing The Bahamas. Ellen was apparently on vacation, who knows, maybe in The Bahamas, and the show was hosted by Stephen “tWitch” Boss, who had JB Smoove as one of his guests.

Smoove, who must be one of the most likeable as well as talented men in the entertainment world today, was showing video of his shark diving in The Bahamas with Stuart Cove and Beneath the Waves. Unfortunately, he did not mention either of them, but time was not on his side in the interview. Smoove was part of the celeb cast for a one-hour episode of Shark Week in 2021 filmed off the southwest coast of New Providence. I was an invited guest on the same vessel the day after he was aboard along with Brad Paisley for the filming. And what was so cool about Smoove’s sharing his experience was his excitement, his recall of the types of sharks he saw and his description of everyone, including the man who stood straight and tall, arms crossed, on the bottom of the ocean floor, guarding the actor, comedian and man with the Smoove moves.

My late mother-in-law used to thumb through the obituaries every Thursday and pronounce, ‘People dying who never died before.’ You couldn’t argue with that. But this year, along with the tragedy of deaths from COVID or diseases exacerbated by it, we lost so many special people – photographer Roland Rose, civic and hospitality leader J Barrie Farrington, Pastor Timothy Stewart, King of the Waterfront Lundy Robinson, sisters who lost their lives caring for others at the beginning of the pandemic Nurse Sherrlyn Charlton-Bain and Custodian Marion Burrows-McKinney, Diana Symonette, and a very special young man named Patrick who left an unfillable gaping hole.

There were so many more, nearly five and a half million worldwide, more than 700 in The Bahamas from COVID alone. All the more reason to treasure each day, soak in the sun, the breeze, the beauty that is The Bahamas where we are among the luckiest people on the entire planet to be able to wake up each day in this place. And call or visit a friend or someone you respect. After all, people dying who never died before. My late mother-in-law, she had a point.