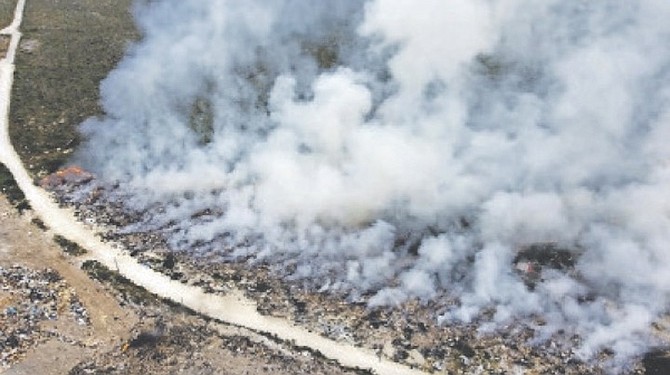 THE Disaster Reconstruction Authority (DRA) advises residents of Abaco to report unauthorised dumping and foraging at the Great Abaco Sanitary Landfill, located on Snake Cay Road, in the wake of a large fire that continues to burn at the site.

Thomasina Wilson, senior deputy director, Department of Environmental Health Services, in collaboration with the DRA said, “The Ministry of Works created the Snake Cay site in the aftermath of Dorian. It was intended to be used as a temporary holding site for debris until the government had an opportunity to prepare a proper waste management site.”

She added: “Unfortunately, the debris was never removed. Removal is a complex undertaking as municipal waste must be sorted and taken to the open-air disposal site and hurricane debris must be taken to the debris management facility. The necessary resources have not yet been put in place to allow for an effective debris removal plan to be executed.”

She said as a result, debris continued to accumulate beyond the temporary site’s intended capacity as people kept dumping their waste even after the launch of the main debris management site in Spring City.

“People enter the Snake Cay site after-hours for unauthorised purposes when the main debris management site is closed. Many are foraging and burning fires at this prohibited site even after being instructed to cease these activities. As anticipated, this behaviour eventually leads to situations like the fire that is burning today,” she said.

She stressed that people should stop contributing to the problem through the indiscriminate dumping of waste and debris at the prohibited site. Ms Wilson said to report any unauthorised or suspicious site activities to the authorities by calling 911 or 919.

Assistant Chief Timothy McDonald of the Marsh Harbour Volunteer Fire and Rescue believes that while the fire does pose a threat to the surrounding area, it can be contained.

“Due to the volume of compacted debris, we don’t believe that simply dumping water from our fire trucks will be able to put it out. So, we have mobilised a bulldozer to dig fire lines around the burning area to contain the fire and prevent it from spreading to other areas.

“There’s a real possibility of this fire spreading to the surrounding bushy areas or even spreading to other sites. There are a lot of people burning fires throughout the island, and there needs to be an immediate crackdown on this behaviour as it puts us all at risk.”

All residents of Abaco are encouraged to report fires by contacting the Marsh Harbour Volunteer Fire and Rescue at 577-2000, Mr McDonald directly at 577-1221 or Fire Chief Danny Sawyer at 477-5901.

Wendell Grant, project director for the DRA, wants the public to know that when fires and other hazardous situations emerge due to human interference and non-compliance, other disaster recovery efforts are affected.

“Whenever we use resources, be it human or monetary, to put out fires and address other hazards as a result of non-compliance on the part of residents, we must accommodate these unexpected expenses. The end-result is that other recovery efforts are inevitably impacted due to this completely avoidable situation, if only people would follow the rules,” Mr Grant said.

He said as the DRA prepares to relaunch its Small Home Repair Programme and the dome housing project, it is vital that resources go towards providing housing and other assistance for the victims of Hurricane Dorian. However, as such fires are an environmental and health hazard for the people of Abaco, the government must get involved in order to prevent a bad situation from becoming worse, he said.

When you charge for refuse disposal. When you don't man the site 7 days a week. when you don't let the average guy with a truck drop off on sunday afternoons. when there is no executed plan. when its all just a bandaid. when good intentions lead you on the road to hell. when the 2 new mountains catch light...