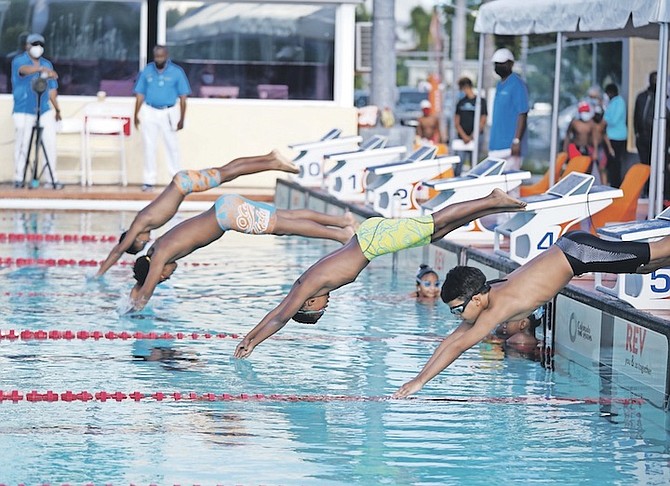 SWIMMERS compete in the Alpha Aquatics Invitational at the Betty Kelly-Kenning Aquatics Centre. More than a dozen swimmers attained the qualifying standards for the CARIFTA Games on Friday and Saturday. Photo: Terrel W Carey/Tribune Staff

ALTHOUGH it was announced last week that the CARIFTA Swimming Championships in Barbados have been postponed due to the coronavirus pandemic, more than a dozen swimmers have attained the qualifying standards at the Alpha Aquatics Invitational.

The two-day meet was held on Friday and Saturday at the Betty Kelly-Kenning Aquatics Centre where two of the four visiting competitors from the Turks and Caicos Islands also earned their berths in the top regional swimming championships whenever they are rescheduled.

The CARIFTA Swimming Championships was originally set for March 26 to April 6, but the president of the Barbados Amateur Swimming Association, Cheryl Lady Forde, said they were forced to postpone the championships due to the current COVID-19 situation in Barbados and, by extension, in the region.

The announcement by swimming comes on the heels of track and field, which declared a few weeks ago that the CARIFTA Track and Field competition in Bermuda has been delayed from the Easter holiday weekend to July 2-4.

On the boys’ side, there were some outstanding qualifying performances as well.

David del Cueto, the head coach of Alpha, said the meet was a very good one. “Not only Alpha, but all of the swimmers from the other clubs swum very good,” said the Cuban native, who has been coaching here for the past year and-a-half.

del Cueto said with the coronavirus pandemic, they were forced to stage the meet without any fans in the stands. He said all of the clubs abide by the protocol rules, which helped to make the meet a success.

The meet attracted four competitors from Turks and Caicos, who were coached by Lemin Hamilton Sr, a Bahamian native who has been working there for the past 15 years, who said they brought the four swimmers here to try and attain their CARIFTA standards.

“We don’t have a certified 50m pool, so we asked to be able to compete in the meet so that they can qualify,” said Hamilton Sr, a former swimmer for the Sea Bees and Swift Swim Clubs. “I’m glad that they did because two of our boys did our standards.

“So we want to stay here hopefully until the Barracuda meet and hopefully the two boys who came close to qualifying will also get to compete so that they can qualify too.”

The other two competitors, who are here until Februry 22, are Tajhari Williams and Mateo Gardiner. All four competitors will be training with the local clubs during their stay.