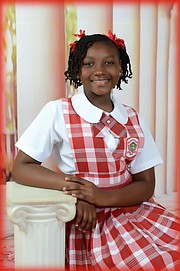 EVEN at the age of 10, Delronae Mitchell understands the magnitude of the first Black and South Asian-American female Vice President of the United States of America being sworn into office.

She, like many young girls, was inspired to not only dream big, but achieve even greater heights after seeing what was possible through Kamala Harris’ experience and election to the second highest office in the US.

“It shows me that as a female you can still reach your goals. No matter the noise in the market, if you want it, go after it and don’t let anyone stop you,” she told Tribune Woman.

The sixth grader is busy climbing her own ladder and has a long list of achievements in her back pocket already.

“I have been a honour roll student from pre-K years at First Step Academy. When I graduated from First Step at five years old, I went to Sadie Curtis. I was placed in grade two after coming from K5. My first term at Sadie Curtis I was placed in second stream and placed first in my class both terms,” she said.

In the third grade, Delronae became the first student at Sadie Curtis to make a grade point average of 3.92.

Among her long list of accolades, her greatest accomplishment, she said, was being nominated as 2021 Student of the Year at Sadie Curtis Primary School.

“Being selected Sadie Curtis Student of the Year has been a very mind-blowing and surreal feeling. To be selected as the Student of the Year has made me feel a great sense of pride and encourages me to keep striving and aiming for the top. It has made me want to push harder and encourage more of my peers to be better and do better in school. It also shows that hard work pays off and that in spite of circumstances and situations you can do all things through God,” she said.

Delronae said she would not have come this far had it not been for the love, support and involvement of her parents, Abigail Gibson and Delron Mitchell.

“They inspire me because they both have done a tremendous job in caring for me and raising me to be the best person I can be. They are both great at their jobs and have achieved great accomplishments in their careers. I am proud of them and motivated to want to reach all of my goals, dreams, and aspirations. It’s because of them I strive to be a leader of excellence and an over achiever,” she said.

And it was her parents who stood by her side when the sixth grader recently went on a mission of empowerment and philanthropy. She donated gift bags to the residents of the Willie Mae Pratt Centre for Girls. Delronae said in doing this she wanted to show the girls there is someone out there who cares.

For Delronae, her future is already shaping up to be a bright one. And although some may consider her just a little girl, her dreams are big.

“I would like to be a teacher and a salon owner. I believe in helping and educating others, as well as making people feel beautiful inside and out. The leader in me wants to be my own boss and manage others, while the educator in me wants no child to be left behind,” she said.