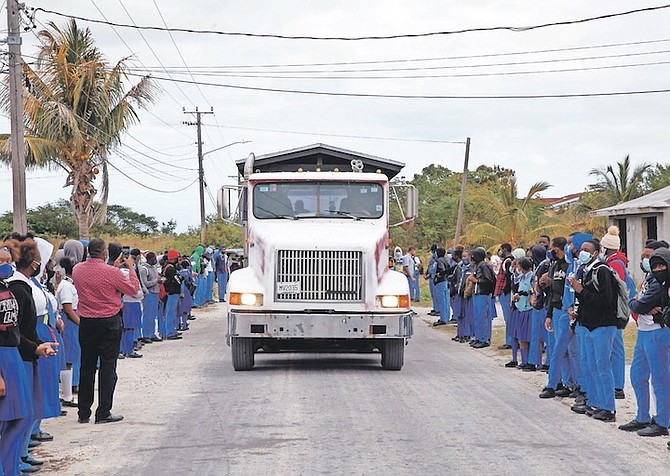 THE Grand Bahama community paid final farewell to educator and swim coach Albert ‘Bert’ Bell who was laid to rest on Saturday at the Grand Bahama Memorial Park.

A motorcade tribute also travelled throughout the streets of Grand Bahama, passing by various schools on Friday.

Businesses were also asked to put up royal blue and aquamarine coloured ribbons in recognition of the beloved swim coach.

Mr Bell was a teacher at the Eight Mile Rock High School for some 25 years. He also taught at the Freeport Anglican High School, now Bishop Michael Eldon High School.

And he also did a lot of work with special needs children in special education. He was also a part of the Swim Programme at the YMCA, and coached various top athletes.

“The motorcade went very well, and we were pleased with the involvement of the community and the schools and businesses,” said Rashema Ingraham, a committee member of the celebration of Bert Bell.

Now, the push is towards the establishment of a tangible permanent tribute in honour of Mr Bell.

Ms Ingraham said the committee wants Grand Bahama residents to support a petition to have a major thoroughfare named after Mr Bell.

She noted that persons can sign a petition on Change.org

Before Mr Bell’s death the committee started the petition drive. More signatures are needed. The committee has set a target of 20,000 signatures.

“We are continuing to work on that,” Ms Ingraham said.

“And, now more than ever we need the support of the GB community to sign the petition. It is on Change.org for the renaming of a street in Bert Bell’s name,” she said.

“We have the link posted on the FAC’s Facebook page so persons can go to that page and sign the petition for us. We need as many signatures as possible. We have maybe 40,000 people living on Grand Bahama, and so we need at least half of that, and we can do it.

Ms Ingraham said that they would be pleased to have the Grand Bahama Port Authority and the Office of the Prime Minister support the cause.

“We are now beckoning the GBPA and the OPM to support this because they know of the work he has done for us in GB, and so, we should name a street in Mr Bell’s honour.

The passing of Mr Bell was featured in Swimming World International Swimming Hall of Fame on swimmingworldmagazine.com.