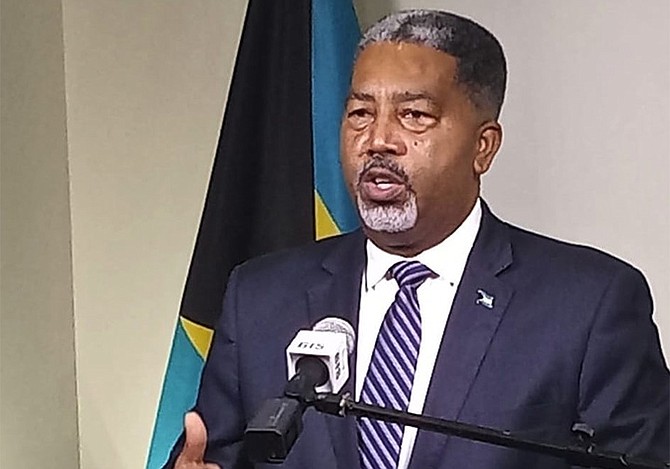 This comes amid an ongoing police investigation into the Children’s Emergency Hostel after shocking surveillance footage at the care home went viral last month, showing numerous children  being severely beaten.

Four female staff members at the home have since been “relieved of their duties” pending the outcome of the investigation.

Asked yesterday if more staff had been placed on leave, Mr Campbell said he believed one more worker faced action, but could not confirm at the time.

“I believe there may have been one more additional person, but I’m not sure of that, but I can tell you that I would’ve indicated in the first instance that whoever is responsible and whoever is found culpable will have to answer to some authority,” he told reporters before going to Cabinet.

Since the video’s release, discussions on corporal punishment have been reignited, with many calling for an end to the archaic practice in both schools and care homes.

The situation has also forced the social services agency to review protocols and disciplinary practices in children’s homes.

Yesterday, Mr Campbell told reporters the ministry has made the decision to stamp out the practice in care homes nationally after the NCPC recommended that corporal punishment no longer be used to discipline children until further discussion is had.

Noting that all staff members will be fully informed of the ministry’s decision, he said that workers will have to sign a document to ensure that everyone is fully aware of the new protocol.

“I met (Monday) with the National Child Protection Council and they gave a further update on their findings with some recommendations,” Mr Campbell said.

“Among the recommendations that we cease any form of corporal punishment immediately until further discussion and so we agreed and accepted that recommendation and we will notify all employees, all staff members of the children’s homes in writing and have them signed to show that they are aware of the missive, that there will be no corporal punishment in any form at this time and to make sure that we’re clear on what is corporal punishment, we will adopt the definition that is given by the Ministry of Education so that there is a standardized understanding.”

According to Mr Campbell, other recommendations by the body include additional training for future staff, the implementation of a behaviour modification programme and regular visitation from officials at the homes “to ensure that logs are being properly kept”, among other things.

He said: “There is also a recommendation for what I would term top brass visitation meaning some person of a higher rank from the Ministry of Social Services, the Department of Social Services who’s attached at the home, will visit on a regular basis to ensure that logs are being properly kept and maintained.

“We’ve also accepted a recommendation from the council that some members of the council will visit randomly to ensure that there is oversight. Another recommendation that we, in addition to the in-house training that we’ve given to staff, that we have an external accredited training programme as part of the requirement for employment at the homes and we have accepted that recommendation.

“We’ve also accepted a recommendation to come up with a behaviour modification programme for the children. It is important that while we won’t administer corporal punishment that the behaviour of the children are such that it is acceptable in any social environment.”

He added: “…I’ve spoken with the chairman of the board of the children’s homes, of that particular children’s home and I would share the report with him before it is shared with the media that the recommendation that we accepted will be across the board for all of our children’s homes throughout the Commonwealth of the Bahamas as we await the results of the investigation from the police. Those are our immediate decisions and we will keep you apprised of any further decisions we make.”

The investigation was turned over to police after preliminary findings by the NCPC revealed that there was sufficient information to involve the law enforcement agency.

Some 24 children are currently receiving counselling as a result of the incident, which is believed to have transpired sometime late last year.

Asked for an update into the investigation, Police Commissioner Paul Rolle told reporters yesterday that officials will provide one once the probe is complete.

“I’ll provide you with an update on that later,” the police chief said on the sidelines of a RBPF event.

" Stop immediately", doesn't mean banned. I think we need a middle ground approach to this. we do not have it 100% correct when it comes to reprimanding children , but neither does the rest of the world in their progressive approaches. Cruelty is wrong whenever it occurs. In america, a thirteen year old boy was killed his mother/ grandmother three weeks ago because she talked to him about his grades. Do we have kids killing parents here?

It's like the pushin' around, roughin' up, and shovin' down the adult and homeless PopoulacesOrdinary at large (POAL) wasn't sufficient feed their addiction of lashin' out by the colony's House-elected and politically appointed.
Shakehead a quick once for Upyeahvote - you just couldn't wrote this be any more was being committed right under the noses redcoats, Twice for not.

Four female staff members at the home have since been “relieved of their duties” pending the outcome of the investigation.

But deceitful Frankie has made sure the four cruel and inhumane staff members will continue to receive their full pay and benefits during the 50 year investigation and probe into the matter. lol

Asked for an update into the investigation, Police Commissioner Paul Rolle told reporters yesterday that officials will provide one once the probe is complete.

Yep. This will be yet another one of the many investigations and probes that go on for longer than the remaining lives of those being investigated and probed. Like so many things, nothing meaningful or lasting will ever come of this matter. As far as Frankie Campbell and Paul Rolle are concerned, the matter is now to be considered officially swept under the rug.

Welcome to 1950 Bahamas!! Only beat the children when they deserve it. Don't forget, the leading cause of wife abuse is that "they just don't listen!"

What about police abuse? Where do we draw the line? Is it ok for cops to abuse suspects after leaving the children's home at 16 years of age?

This one sided bandaid will fail just as all the others have failed.