‘Most Nurses Have Already Been Paid’ 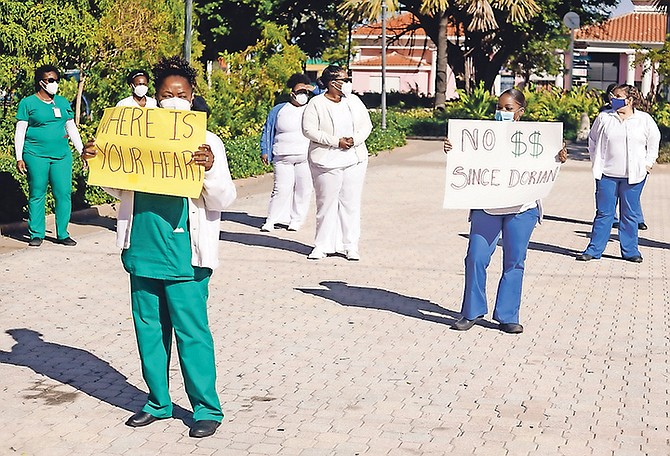 AS nurses demonstrated in Rawson Square for money they say is owed to them over a two-year period, Health Minister Renward Wells told the press the government has paid nurses $162,000 in overtime between March and September last year.

This is the second demonstration the nurses have held this week. They gathered in protest at the Ministry of Health on Monday. Nurses are claiming to be owed money for overtime, increments and honorary gifts promised to them. Both Prime Minister Dr Hubert Minnis and Mr Wells have gone on record to say the nurses will be paid what is owed to them, however, neither said when.

However yesterday, Mr Wells said most nurses had already been paid. He told the House of Assembly that Public Hospitals Authority nurses have received their overtime, but said there is some overtime paperwork issue regarding some nurses in the Department of Public Health.

“The nurses who work for PHA, every one of them have been paid their overtime. When it comes to PHA all of the nurses that work in PHA have been paid... there is only one issue for the nurses in the Department of Public Service,” he told Parliament.

He said he took a paper to Cabinet in September about the issue and nurses were paid overtime in October 2020.

“We come into the new year, all of a sudden there are overtime sheets that have come between March and September that we were not aware of,” he said.

He also explained the issue during an interview with The Tribune.

“The government of The Bahamas has already paid some overtime to the nurses,” he told The Tribune. “We are in the process of paying others. We have paid nurses between March and September of last year. I don’t know anything about owing them anything for two years. I have met with the leadership of the nurses on Monday and we discussed all of their issues. I met with them again on Tuesday, during the Cabinet lunch break.

“For those persons who say they worked and were not paid, I want to reiterate, the government of The Bahamas paid $162,000, as I would have said in the past, in overtime to nurses between March and September for COVID work. There is a difference of opinion between the union and the Ministry of Health as to rates for nurses that are not entitled to overtime and we have since worked those out.”

“The way time is logged in the public service, overtime, is I have to say to ‘Ms Cartwright that I have worked this overtime’ and then Ms Cartwright has to fill out the sheet. Then the sheet has to be validated and verified and then that sheet is sent in for overtime. It’s very manual and if it’s not dealt with in the moment, and allowed to fester and time lapses, things become a little fuzzy.”

With some people now claiming they were still not paid, the minister said an exercise of validation is now taking place in the Ministry of Health to bring everything up to speed.

He said: “We are now being told that all of those who were paid were not all of those who worked. So now we are going back and validating the circumstances for those who said they worked and were not paid. That in and of itself ought to show that the government of The Bahamas was not, not trying to pay the nurses. This minister issued instructions to the Ministry of Health that overtime should not accrue for nurses or any other person who works in the Ministry of Health.

“They should be paid (overtime) on a monthly basis and we should not be accruing overtime. It was supposed to have been validated and they were supposed to have been paid. I am one who believes that a workman is worthy of their hire. The government is not seeking to keep from its workers monies that they are duly owed, given our economic circumstance.”

During yesterday’s protest, the nurses held placards while chanting, “Nurses’ lives matter! Give us our respect!” Avoiding the demonstrating nurses, Dr Minnis left Parliament using a side door that led on to Parliament Street. Mr Wells did not go across the street to speak with them either.

Bahamas Nurses Union president, Amancha Williams, said the government has broken its promises and all the nurses want to do is get what is owed to them. She admitted speaking to Mr Wells and his team.

She said: “We spoke with the minister and his team. He gave us no idea when we would be paid. He said he is only willing to pay sections at the end of the month. We said we have already waited two years now, so pay us all. We want the public to know that we are not asking for money, this is what we have worked for.

“We have deferred all of our industrial agreement payments and our increments. We are asking for the government to pay us our overtime that should have been in their budget. The Prime Minister himself said that they would pay us an honorary gift. We didn’t say we were going to pay ourselves an honorary gift. He said it. And, he told us to wait until December. Broken promises!”

The BNU president said she does not consider asking for money owed during a pandemic unreasonable, because it has been a long process of promises with no actions and the ministry is spending money frivolously.

She continued, “We are not unreasonable. The Prime Minister and his Cabinet are sitting up in there (Parliament) eating three different meats, air conditioning in their cars and allowances. (Officials have new cars). . .and we are being unreasonable? Meanwhile nurses have to go out to see patients in the community using their own vehicles. In Abaco the sewer is coming up in the place. That is what nurses are going through in the country.”

The nurses, feeling jaded, said they gave up their vacation during the 2020 pandemic year just to continuously work, making sure patients at the hospital were given proper healthcare. They said they were the ones “keeping this country alive by God’s grace”.

Why do so many of these nurses have such large waist lines and big butts if they are truly on their feet working so hard to help patients under their care?

...er...they were forced with limited income to buy the cheaper foods in the grocery store which is not too healthy but affordable.

But Minnis is a medical doctor.....surely he can readily see for himself that these nurses are in desperate need of a much more costly and nutritionally balanced diet, one that includes the recommended daily portions of expensive fruits, vegetables & nuts such as those sold by that notorious price gouger Rupert Roberts.

I am inclined to believe the nurses and not the Minister.

@ tribanon. Mr. Roberts usually gives the donations, like to the Feeding Network and with photo recently with the PM Minnis holding the oversized cheque. One of the cheapest things in the stores the public benefits from tends to be always big supply of bananas at usually 79 cents a pound. All govts need to be pleased with Mr. Roberts because govts reap in enormous tax revenues from Stamp Duties items coming into country and the VAT he makes selling for govt.

An obvious item that needs to be charged on is the suggary drinks which is part of contributing to the nations numbers of illnesses, but for some reason these drinks seem not to be discouraged by increasing its costs by govt. Drinks continue and increaseng Hospital costs to taxpayers continue and lot of patients take their money outside country for health care continue.

The donations made by Roberts pale in comparison to the outrageous profits derived from the price gouging and transfer pricing practices of his Bahamas and Florida operations. His Florida operations likely are still the main buyer for (and seller to) his Bahamas operations. And for decades he has been justifying his price gouging by saying poor Bahamians steal too much from his food stores. He seems to have a simplistic but nevertheless warped "they steal so I steal" view of running his food retail operations.

You need to go back to school and learn how to write.

You need to have someone take off your halters and bit out of your mouth so you can see the bigger picture of our sisters protesting over monies due to them by their employer.