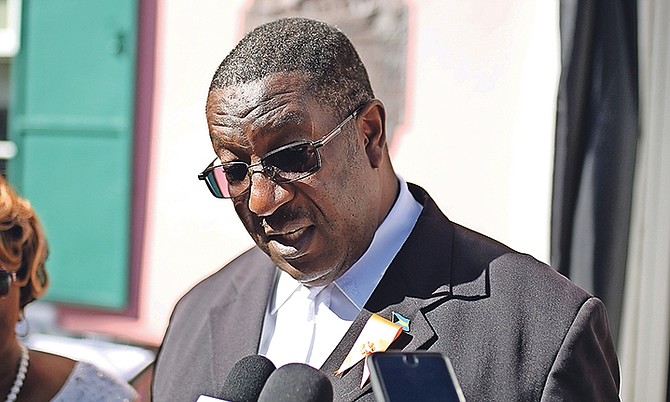 AFTER severing ties with the Free National Movement, Nassau Village MP Halson Moultrie said he has no intention of resigning as Speaker of the House of Assembly.

In an interview with The Tribune Friday, Mr Moultrie said he suspects the governing party will seek to prorogue Parliament to have him removed from the post.

The Nassau Village MP tendered his resignation from the FNM late Thursday afternoon citing the move came because his convictions collided with continued affiliation with the organisation.

“I have resigned as a member of the Free National Movement to become an Independent Speaker. I will continue to be Speaker. I will not resign,” he told The Tribune, speaking for the first time since he walked away from the party Thursday.

“However, that will be determined by how soon the House is dissolved. I expect some initiative by the governing side to try to prorogue the Parliament to have the Speaker removed. That might be a consideration.”

He explained that the House can be prorogued with a vote of no confidence which is a censure on the Speaker.

If that is successful, he said, the Speaker is not obliged to resign, but usually would comply with the wishes of Parliament except in extraordinary circumstances when the Speaker might feel that it is a “spiteful” intervention and then he can make a determination on whether or not he will resist by not resigning.

“If the Speaker refuses to resign there is nothing that can be done,” Mr Moultrie said. “It depends on how the matter is dealt with. If the matter is dealt with in an honorable, respectful way, then the Speaker will be inclined to abide by the wishes of Parliament. But if it is done in an adversarial, disrespectful manner then I will be obliged not to because my whole initiative is for the independence of the Parliament.”

Mr Moultrie, who for some time has been an advocate for autonomy of the House of Assembly, said it is very important that the Speaker’s position is on even keel with the Prime Minister and the Chief Justice.

“Those three branches of government (Executive, Legislative and Judicial) should be respected and should be separated in administrative independence and autonomy as well as financial,” he continued. “In the Constitution, Article 72 calls for the executive branch to be accountable and answerable to the legislature and that is not possible when the legislature is being controlled by the executive. That should never happen.”

Asked what drove him to resign, Mr Moultrie said there were a number of issues that led to his decision.

“It was a cumulative effect of a number of issues,” he explained. “Part of it was basically the reluctance to give to Parliament its autonomy and independence. Not willing to bring the Parliament Services Bill. Not willing to bring the resolution that was recommended by the Speaker with respect to the restructuring of the sitting of Parliament to accommodate the virtual sitting so that members can participate without being present in chambers.

“The refusal to accept the offer by Baha Mar to give us a complete facility with nine feet physical distancing at no cost at all to the tax paying Bahamian people. The refusal to the proper renovation to the Speaker’s office. It was a cumulative effect.”

Hours after Mr Moultrie’s resignation letter went viral, party insiders said his decision in part came out of anger as party officials decided not to offer him a nomination for his constituency.

“First of all, the party had never indicated that there was someone slated to replace me in the Nassau Village constituency,” he said. “And, even up to this date and time now, no one has suggested that the party had identified someone to. That is just a spin that has been put on it. As a matter of fact only seventeen candidates were published and many incumbents were not included.

“Howard Johnson was for South Beach and Jeffrey Lloyd replaced him on nomination day. So, it’s not any guarantee that if you get ratified you will get nominated. So that was not an issue to me.”

The Free National Movement said Friday it received Mr Moultrie’s resignation and looked forward to continuing to work with him to uphold democracy, transparency and accountability.

I suspect that the Queen will have him removed because he is standing up for democracy. I have never felt that England wants true democracy here - that is why our Constitution does not allow a majority of MPs to choose a Prime Minister from among them. They are only allowed to choose a prime minister if they are members of the same party. So if we have 25 independents win in the next election - we may still have an FNM or PLP prime minister who has fewer than 20 members in the House.

Also, we have heard that the court case to remove the tracking numbers off of our election ballots worked its way all the way to England to the Privy Council who so far has refused to hear the case. It is suspected by some that the reason they refuse is because IF they rule that such a practice is non-democratic then they would be ruling on England as well which has the same ballot number tracking system. It would be an embarrassment.

This man Moultrie is standing up for freedom and democracy, and we all know that such things are simply not allowed in this day and age of communist rule. Look at what has happened to Hong Kong. There has been ZERO push back from the world community. No country has ordered that there be no flights or ships to and from there. The only little whimper we have heard is that UK has offered immigration status to certain Hong Kong persons who hold some kind of semi-UK passport. However none of them have actually moved to UK or gotten any status as yet. Another empty threat to feign care and concern.

I wish Mr. Moultrie the best of luck - because I would love to live in a free and fair country - but at the same time won't hold my breath.

Imagine the govt refusing an offer of free space to run the House from Baha Mar. They could have rebuilt the House during that temporary time. But yet - they have announced they wish to put us further in debt by "fixing up" airports all around this country. Contracts, contracts, contracts. You know the kind. The kind that we never see that are accompanied by invoices that we never see. Yeah, those kind.

There's really no need for Moultrie to resign as House Speaker given that Tweedle-Dumb Minnis has little choice but to soon call a snap general election.

WHY DOC NEED TO BE BOTHERED WITH THE SPEAKER. . .JUST LEE HIM TO HESEF. . .THE RULES IN THE HOA PROTECTS THEM FROM HIM TOO!!

I say leave him on the seat. . .he is shooting himself in the foot good and well. . .give him a little more time. . .