Over-65s Won’T Have Uk Vaccine: Govt Follows Other Countries In Holding Off Rollout To Elderly 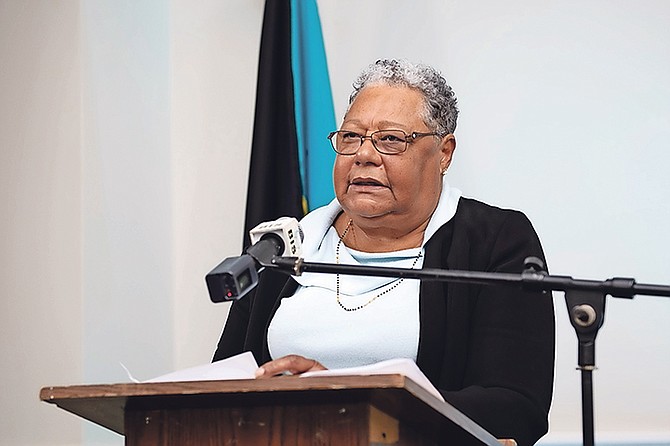 OXFORD-ASTRAZENECA’S COVID-19 vaccine will only be given to people between 18 and 65, though this may change as scientific studies about the effectiveness of the vaccine in the over-65 population are reviewed.

The announcement was made by Dr Merceline Dahl-Regis, head of the COVID-19 Vaccine National Consultative Committee, yesterday.

With this plan, The Bahamas joins a number of European countries that have not made the vaccine available to people older than 65 – the age grouping most vulnerable to COVID-19’s risks.

Speaking during a press conference, Dr Dahl-Regis said: “We have a choice. At this time, prior to this afternoon’s release of additional data, we had decided that we will vaccinate 18 to 65-year-olds and older than 65, that’s 28,000, such a small population, that we will hold (off on) that group. Given the new literature, we will have to review that data and we really need rather than rely on press releases of scientific data to have an opportunity to look at the published data that has gone under peer-review.

“A group of scientists, including our national representatives, will have active discussion on this and then such recommendations will be taken to the committee and then we will decide. But the plan is, from this morning’s plan, was to limit our grouping to 18-65.”

Dr Dahl-Regis could not say exactly when the vaccine will arrive in the country, noting that the promised 100,000 doses could come in two tranches as opposed to all at once.

“We don’t know,” she said. “We are expecting that it may come in two tranches, but those tranches will be close together. We will know more in a week’s time when they tell us but we’re just in a holding pattern right now.”

She said officials will follow the scientific recommendation that a two-dose regimen be administered, meaning 50,000 people will be eligible to receive the first 100,000 doses. Officials said the second dose will be administered 12 weeks later.

Health officials have formed three “priority groups”, a characterisation that will dictate who gets the vaccine and when.

Group three will include all other people.

Dr Dahl-Regis said officials anticipate that the vaccination process for the first batch of vaccines will be completed over six weeks.

The proposed distribution sequence includes the first four weeks for New Providence, Grand Bahama and Bimini, weeks two to five for Abaco, the Abaco cays and Exuma, and weeks four through six for Andros, the Berry Islands and Eleuthera.

“At the outset, healthcare workers at public health facilities, vaccinators and frontline workers will be targeted early in the administration process. On islands with small populations, health teams will immunise all eligible residents, they will not follow the priority groups. They are small populations,” Dr Dahl-Regis said.

“The vaccines will be administered at accessible locations in communities throughout The Bahamas to increase access to all Bahamians and residents and ensure equitable distribution of vaccines to those who choose to take it. There will be a focus on high-risk populations where COVID-19 has occurred.”

The vaccination process will involve registration for the vaccine, vaccine receipt, monitoring for adverse effects and then certification. Pre-registration available online and at registration centres across the country.

Dr Dahl Regis noted that some people should not get the vaccine.

“Extra precautions must be taken to determine if there are significant allergies or if the immune system is compromised to the point that significantly reduces the effect of the vaccine. This is the reason why we must protect those who cannot receive the vaccine. “Getting the vaccine protects not only you but those around you,” she said.

The Oxford-AstraZeneca vaccine, which was co-invented by the University of Oxford, will be provided through the World Health Organisation’s COVAX facility.

Although the government did not have a choice in which vaccine it would get from the WHO, Dr Dahl-Regis said among the three most prominent vaccines worldwide – Oxford-AstraZeneca, Pfizer and Moderna – the Oxford-AstraZeneca vaccine is the one that officials preferred.

“We were quite amenable to receiving Moderna but because of the ultra-cold requirements of Pfizer we recognise that would have been a challenge for portability, particularly throughout the archipelago,” she said.

......government did not have a choice in which vaccine it would get from the WHO, Dr Dahl-Regis said....

Right from the horse's mouth. And of course we all know the WHO is controlled by none other than the very sinister and evil Communist Chinese Party.

I like my high sperm count from years of enjoying conch salad, and I'm not about to risk it being significantly reduced down the road to please Red China's wish for the whole world to be conquered and dominated by their own yellow race. I suspect by the turn of the next century there will be more Communist Chinese on the continent of Africa than indigenous Africans or persons of African descent, and the same may well be the case for The Bahamas.

And sensible people should be asking how is it the side-effect and harmful reaction studies for the Oxford-AstraZeneca vaccine being distributed by the WHO/COVAX facility were not targeted or heavily skewed towards the elderly as the group known to be most vulnerable to the Red China Virus. That should give everyone pause for serious thought!

You really have a mental problem, you're obsession with China aint healthy. Get help....

The whole Country will be going to HELL in a Handbasket!!!!!

This is strange: Everywhere else, older citizens are top priority as they are most vulnerable.

And why are Out Islands citizens less worthy than those who live in New Providence or Grand Bahama? Are they less human somehow? Less Bahamian? Appalling. Out Islanders aren’t at the back of the line when the gov’t wants to collect VAT or Customs duties. Why are they somehow less human when lining up for a Covid vax?

Clearly, it’s gonna follow the same path as always: Shots will depend on politics and connections, on “who you know” and how you can cheat the system.

It just shows you that they do not know what the HELL they are doing!

Dumb is as dumb is. This vaccine and JNJ are better than PFIZER and MODERNA and does not risk being spoilt from the wrong refrigeration as well. Guess the Gov. bent on screwing the elderly. Will have to go to USA to get it like everything else.

J&J vaccine is not yet approved, they just submitted data today for emergency approval. And, most recent data suggests 60-70% effective, although only one dose is required.

Dr: Regis will not be receiving the vaccine. Because if she is not over 65 , she looks that way.

Perhaps she may be the exception to the rule along with whomever the competent authority deems worthy.

Seems a bizzare plan for some to decide on not giving many in an age group an iota chance or mabye up to 8% cure of having a vaccine to save their lives instead of waiting until next advisory. Its the right thing in this democracy to treat all equally and have the vaccine available to everyone.

Could it be that redcoats are a preppin' for why it may be time to reset expectations away from PopoulacesOrdinary at large (POAL) to allow with wraparound speed sufficient time target to Lyford Cay residents are first in line to get stabs Covid vaccine? Does anyone want to take a stab at the name of the gated community's, chief lobbyist? Shakehead a once Upyeahvote, you just couldn't write this be anymore the governing ideology** redcoats, Twice for Not?

France is also limiting the Oxford Astrazeneca vaccine to under 65. Astrazeneca and Oxford need to sort this out quickly...