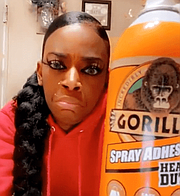 Millions around the world are following the painful saga of TikTok user Tessica Brown, who used spray glue on her hair.

We all know there is truth to the old adage “beauty is pain”, and many women will endure that pain as the price to slay all day.

But Tessica Brown, who has become known as the “Gorilla Glue Girl”, learned the hard way that sometimes trying to look your best can make you end up with extremely painful and embarrassing consequences.

Tessica, a 40-year-old TikTok user who lives in Louisiana, gained notoriety when she was forced to seek medical treatment after using Gorilla Glue Spray to gel her hair into a ponytail when she ran out of her usual Got 2B hairspray.

A month later, her hair is still bonded to her scalp.

Efforts to remove the glue, including a visit to the ER, have thus far proved ineffective. Healthcare workers have suggested she use a mixture of acetone and sterilised water to slowly and painfully loosen the glue.

Millions of people around the world, including celebrities like Chance the Rapper, have followed her progress over the weekend, some even donating money to her Go Fund Me account, which has raised just under $10,000 so far.

And while using industrial glue to slick your hair back may seem a tad insane, many Bahamian women admit they can understand the lengths a person may go to when under the extreme pressure to look your best.

“I feel bad for her, and yes, it was a bit dumb, but let’s be real, we have all done dumb things in the quest to get our hair super straight,” said Tribune reader Maria of Tessica’s situation.

“I remember knowing my hair was burning getting a perm, but lying, saying no it’s not because I wanted my edges straight. And everyone remembers getting burned from the hot comb growing up. Black women spend hours and thousands of dollars to have straight hair,” Maria said.

Hair disasters are quite common it seems, according to our female readers.

“It wasn’t something that I did, but something that happened. I went to my hairdresser to get a perm and her power went off while the relaxer was on my head. Unfortunately, her water goes with electricity and so she couldn’t wash my hair out.

Of course, my hair started burning, so we decided that since I lived 10 minutes away I would dash home and wash my hair out and then come back so she could try to figure out a style. Well, my hair was on fire by the time I got home, only to discover that my power was out too. I had to wash my hair with all the Aquapure I could find in the house. But by the time I finished the perm had burnt into my scalp and I had burns all over my head. It was a mess and super painful. For weeks I could barely touch my scalp much less comb it,” she said.

Janice said her ordeal happened when she had hair extensions glued in and thought she could remove them herself.

“My stylist told me to just soak the hair in a bit of olive oil and it should pull right out. I did that, but imagine my horror when I pulled out the last bit and realised that a whole chunk of the front of my own hair had come off with the extensions. I was devastated,” she said.

Meanwhile, Fran had a wig issue, although she said it was more embarrassing than traumatic.

“The biggest hair and beauty mistake I think I made was wearing a wig and not having it installed on tightly to my hair,” she explained. “This was back in the day when 60-second wigs were a thing.

“This was an asymmetrical bob bang. And it was not like the lace wigs nowadays that you glue on the perimeter of your hair. This was the kind of wig that had a string. So, I wore this wig during an intimate moment with my boyfriend. Just as we were about to get into the groove of things, I threw my head back on the chair handle, and can I tell you the entire wig came off?

“My boyfriend laughed, so did I, but was super embarrassed deep down inside. Child, that killed the whole entire moment. I don’t even remember if I put the wig back on my head. But lesson learned: never ever wear a wig that is not on correctly,” she said.

Jeneane said that her most embarrassing hair moment was when she decided to dye her hair right before a major event.

“I always dye my hair myself. This time, I was going to a party, and even though I was running late, I decided I would dye it and then just wear it in a bun even though it was wet. Listen, it started to rain when I was coming out the car to get to the party and that dye surely did run down my neck and onto my top. Thank God I had an old black shawl in the car to wear.”