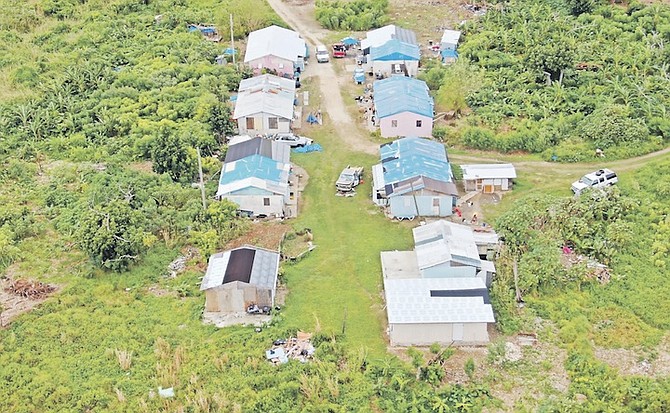 AN AERIAL view of some of the properties that have sprung up. Photo: Stephanie Hield

IMMIGRATION Minister Elsworth Johnson said yesterday his ministry has been working in conjunction with other government agencies to address illegal immigration and shanty town concerns in Abaco, vowing officials will clamp down on the problem, but in a humane manner.

This comes after Works Minister Desmond Bannister with other government officials toured some parts of the Farm Road shanty town on Saturday.

Officials have estimated that between 1,000 to 2,000 illegal structures have been built there since Hurricane Dorian hit the island in 2019.

Speaking to reporters about the matter yesterday, Mr Johnson said while the government is committed to cracking down on unregulated communities, it has to do so in a careful manner.

“This is an ongoing exercise to deal with unregulated communities. As you very well know, there is still a matter before the courts where strategic analysis was done out of localities, especially in New Providence,” he said before going into Cabinet.

“We went into Andros and the same thing was done by the minister, the Deputy Prime Minister, and I want to commend him and the cross-ministry collaboration on this effort to, in a humane way, address what is a growing problem.

“And so, what was done in Andros is that we were able to go and identify these locations in a dignified way, find out who are actually living there and so in Andros, we have compiled all the names and so we are tactfully dealing with these individuals.

“The same thing is being done in Abaco where a team led by the deputy prime minister and he will speak more to it, is going through tactfully and (in) a humane way identifying these living arrangements and where there is breach of the code, you deal with it.

“Where there is breach of the Immigration Act, we’re dealing with it and so that’s just what’s happening and you know you have women and children and the whole thing about the possibility of trafficking and abuse and you want to get in there to be able to deal with it holistically and in a humane way and that is what we’re doing.”

Before Hurricane Dorian decimated them last year, shanty towns across Abaco had more than 1,000 homes and an estimated population size of 3,500, according to government reports.

Two weeks after the storm hit, the government issued a ban on the construction of any new buildings in the four major shanty towns on the island.

Despite the government ban, unregulated homes continue to spring up.

During Saturday’s walkabout in the Farm Road community, The Tribune spoke to several area residents, many of whom said they had work permits and a lawful right to be in the country.

Asked to respond to concerns about the amount of work permits being granted to Haitian migrants, Mr Johnson replied: “We’re working closely with labour (officials)... and that’s why digitisation is key. When you’re dealing with paper, it’s very difficult to trace and track all of these different things and so it’s revealing a lot of things about persons.

“And as a part of the public education, we are requesting from the permit holder their locality in terms of where they’re living and we are assiduously – the director of immigration I want to commend him—we’re looking at applications, so, let’s say if you make an application, we want to know where you’re living.

“So obviously, we would not grant a work permit for a shanty town and I’ve told them publicly that I don’t like the fact that when I go into these areas, people are able to provide me with documents.

Those wanting to apply for work permits in The Bahamas have to apply outside the country, according to existing policy.

one to two thousand shanty homes were not built overnight. the FNM government knew all long. so what is this all about?

What has happened for all of this talk? at this time. who do they think they are fooling