Abaco residents: We need someone to fight for us 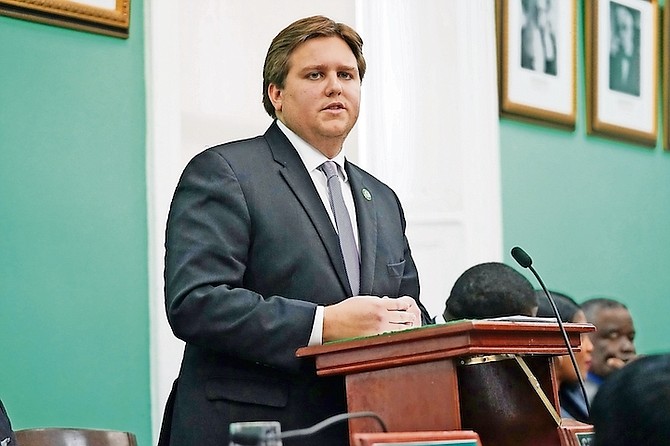 JAMES ALBURY, Parliamentary Secretary in the Office of the Prime Minister in Abaco and MP for Central and South Abaco. Photo: Terrel W Carey Sr/Tribune Staff

CENTRAL and South Abaco MP James Albury’s decision to not run again in the upcoming election did not disappoint some of his constituents, who told The Tribune they need a representative who will fight for them and better serve their needs.

Their comments came after Mr Albury, 27, confirmed on Monday he planned to step back from frontline politics and instead focus on family.

He insisted the decision was a personal one and not one the Free National Movement forced him to make.

When The Tribune contacted several members in his constituency to seek their reaction, many said they were were not disappointed he was stepping down.

“No one was happy with him,” said one constituent, who asked to remain anonymous.

“Some people felt he wasn’t available, he wasn’t here and first of all, he was one of the ones who had the worst record for not showing up to Parliament. I think he was just completely overwhelmed when we first put him in there.

“We wanted someone young. I really wanted someone who had been in local government for a while but he got in and it was just more than he could handle. You have to realise that we had (Hurricane) Dorian and (I feel that) the government completely ignored Abaco, completely. The Member of Parliament (for South Abaco) really should’ve been kicking up for us.”

Since the announcement, there has been speculation among Abaco residents as to who will be nominated to run on the party’s ticket for the area.

However, sources told this newspaper that one person rumoured to be the party’s top pick is Vandea Stuart, an Abaco resident who originally hails from North Andros.

The 42-year-old businesswoman relocated to Abaco from Grand Bahama more than ten years ago and has been a strong advocate for the community since Hurricane Dorian, often taking to social media to provide updates on the island’s restoration efforts.

She is also known throughout the community for her inspirational messages on social media, which encourages locals to keep rebuilding and pressing on despite adversity and challenges faced since the storm hit.

When contacted by The Tribune this week, Ms Stuart refused to confirm or deny that she is being considered for a run in the Central and South Abaco constituency.

If ratified, however, this will be the first time the Abaco resident will be participating in frontline politics.

“I don’t come from a political background, but I’ve always been an FNM supporter,” she told this newspaper.

“I’ve voted FNM all my life and in the last election, I campaigned with them really hard as far as conducting a lot of speeches on the campaign trail whether it was Moore’s Island, Crossing Rocks I was there, being a speaker on behalf of the FNM.

“I’m a former Torchbearer and I don’t really put it out there but people really knew the last election that I was doing a lot of speaking on behalf of the FNM and whatever but pretty much I’m well known throughout the community.”

Despite her well-known support for the FNM party, Ms Stuart made it clear that her contribution to the Abaco society is not politically motivated, insisting that her work comes from her heart.

She said: “I never thought about running but to be frank with you my motive was always to help people. Because personally I know what it is to go through struggle and not to have…but whatever I had, if I knew even someone was hurting or someone was needing assistance, I always tried my best to help.”

Asked about her thoughts on Mr Albury’s performance in the community, Ms Stuart said she thought he did his best given the challenges he faced while in office.

She told The Tribune: “I would say that I felt he did his best considering all of the circumstances. It definitely was a challenging time with the hurricane and with COVID and all and I do know that he was very responsive with sharing information on social media and keeping people updated as it relates to what was going whether there was a power outage. He would always keep everyone informed.”

Earlier this month, the FNM ratified 17 candidates, including some newcomers and 11 incumbents, to contest the next general election.

Many prominent Bahamians whom Minnis had hoped to persuade to run on his ticket, instead chose to run for the hills when approached by him. Can't help but wonder why. lol