DIANE PHILLIPS: Can someone please explain why this is allowed to happen? 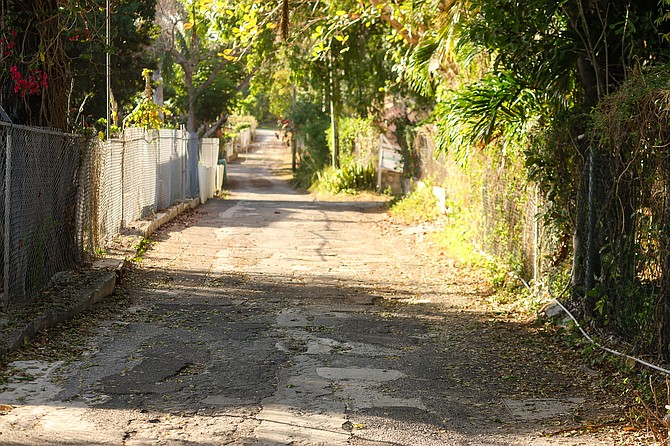 The paved path off Village road.

A real-life Hatfield-McCoys is playing out on a narrow, paved path off Village Road in Nassau. That’s where a few residents on the southern side and in a neatly fenced in area at the cul de sac on the western end have been fighting a seemingly endless battle with an unlicensed hotel that occupies the northern side.

On the other side - the Orchard Garden Hotel.

Black has been writing to authorities and to the hotel owners for over six years. She has been to the Department of Physical Planning, to the Hotel Licensing Board, and to just about anyone she thinks can help. The major issue – a private road once co-owned and shared by property owners that included her late parents who created Black Estates in the cul de sac at the far end, inclusive of four residences with spacious green space.

According to Black, that road was never intended for commercial use and today is pockmarked by deep potholes and lumpy with tree roots. Government will not maintain it because it is a private road and Black feels strongly that the hotel traffic should use Lake View which is now blocked by a gate but would be the logical entryway. The Department of Physical Planning turned down that request in 2018, saying they “were not minded” to change access that had been in place for 30 years. That same year, the Hotel Licensing Board reported to Black that the hotel offered to pay up to 95 percent of the cost of repaving the road. Nearly three years later, that has not happened and the condition has worsened.

Is it a conflict without resolution? I would hope not.

A lot has changed since Black began begging for attention for a situation that has gotten progressively more dangerous. The owner of the hotel, Dr. John Knowles, who Black said looked after the property with loving care, passed away. From the written records, his widow does not appear to be hands-on or to shower as much attention on it. There have been issues with lighting and security. Police have been called on numerous occasions. Other neighbours have complained about loud noise at all hours of the night and wee hours of the morning.

They’ve spoken of beer bottles being thrown in their yards as people screech out.

The Hotel Licensing Board said Orchard Garden Hotel has not been licensed for some time, but they are trying to get them onboard their new platform.

The Board sees its education and improvement of standards role as priority, especially during economically challenging times.

Black’s issue is not with the licensing, nor even with some of the other matters she has raised in a cache of communications – high, heavy branches that need trimming and could be a threat in high winds, the less than desirable traffic, the screaming as there was on a recent night, she said, with a woman yelling “I want my f------- money.”

No, her issue is mostly about the road. So I drove it yesterday and understand her frustration. I held my breath between deep potholes.

When an oncoming car tried to squeeze past, we both politely, nervously stood our ground, not knowing if there was room to make it. There was an eerie feeling of travelling down a path time had forgotten. Yet when I looked over at the courtyard of the unlicensed hotel, I could not help but notice the mature trees and think of the potential the property could have if instead of the battleground for a fight among neighbours, it became a fertile ground for a new opportunity with a new entryway. I could not even imagine how a service vehicle could get in and out easily in the current condition.

The residents who call that once quiet street home and the businesses that neighbour it deserve better than this.

My late mother-in-law used to open the obituaries on Thursday with a comment that always made me smile despite what lay ahead, “People dying who never died before,” she’d say. Well, technically, that was true since, for most folks, you only die once. The question is how did you live? Did you give it your all? Did you become everything you could have been? Did you give back to community? Did you leave your mark on the world in even a little way?

Carleton Williams did. When he died on February 7 at the age of 91 with a string of awards behind his name from Queen’s honours to The Salvation Army highest nod, the Others’ Award, he left a legacy that will live for generations to come.

Williams’ achievements took great courage against the backdrop of the era in which he lived.

In 1975, while movie theatres were still segregated, Williams, who had already made a name for himself in construction, landed the first McDonald’s franchise. He later became chairman of Caribbean Bottling, marrying the fast food soft-drink gobbling giant with the soft drink manufacturer.

But it was his community involvement and his reticence to command recognition for what he did that made him so extraordinary.

I had the good fortune to know him personally and to have earned his trust so when he gave the family home in Grant’s Town to The Salvation Army and hosted a lunch, we served those who came before he sat down with them to share quiet and sincere words of encouragement.

There seemed to be no limit to the goodness and kindness that lived inside this man.

The more he gave, the more he smiled, that slow smile that crept across his face until it reached his eyes and lit them up with a mischievous twinkle.

All he had gotten away with was secretly bestowing another gift on a hungry soul, a student in need of a scholarship or a family burdened by medical bills.

May the lessons he taught us, showing that business acumen and unfettered compassion are best when served together, live on.

Real Property farce is robbing us of our history

The current Bahamas Real Property Tax regime favours those who fail to maintain their property. Low appraised value translates into low tax. Less property tax is a financial incentive that’s hard to ignore if you secretly want a building to just fall down or wish it would naturally go up in smoke and clear the way for redevelopment. Why fix up and paint up and plant attractive landscaping in an unoccupied space if it is going to drive up your tax bill?

Suppose, though, there were a penalty for allowing a building to become an eyesore or security risk? Suppose that, like in many places where historic structures and sites are respected, there were stiff penalties for demolition by neglect. Placing a sign on something saying do not tear down is not the same as forgiving taxes for fixing up or establishing a watchdog committee that oversees historic structures just as the Bahamas National Trust oversees the nation’s parks.

The gut-churning truth is too few people care. We spend more time and money maintaining our cars which could be reproduced in a flash than we do maintaining our unique architecture which creates the built fabric of our lives, our cities and our settlements.

How many more years will we continue to put up with the Dirty Dozen in downtown Nassau while the perpetrators of poorly maintained properties get away with paying less tax than those who paint, plant and care for their property?

We will never be able to replace the two-storey stone structure on Bay Street that burned down in January (subject of last week’s column). It’s been reported that it was the oldest still standing building on the waterfront, dating back some 200 years or more. I do not know the exact history but I do know this: While the issues surrounding property tax have recently focused on collections – and well they should – with progressives like successful businessmen including Mario Carey and David Morley calling for private sector management of a system that is not working, historic preservationists are crying out for a different kind of overhaul. We want a system that does not favour ugliness and neglect. We want a regime that empowers and incentivizes those fortunate enough to own historic properties. We want a process by which funds can be borrowed to make repairs at a low interest rate with favourable terms and one which speaks a whole lot louder to what it takes to reinvigorate a proud and shining historic Nassau.