North Abaco Mp: I Did My Best 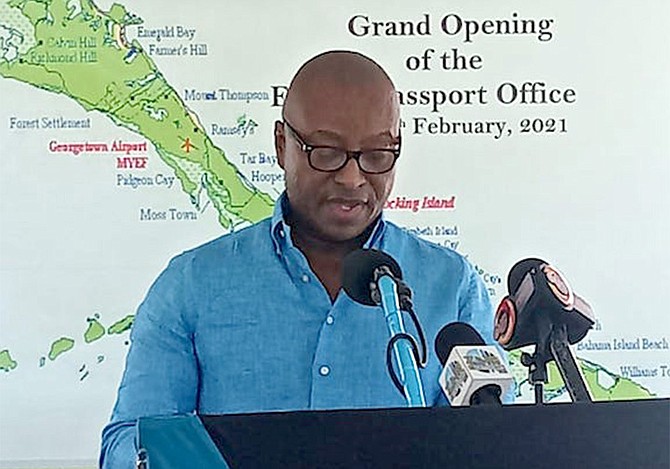 The incumbent was recently ratified as one of the Free National Movement’s candidates for the 2022 general election and told The Tribune that the governing party did the best that it could do given the circumstances.

Asked if he felt confident in being re-elected to represent his constituency, Mr Henfield said it was up to the people of North Abaco to make the decision.

However, he said he would continue to work as hard as possible to earn and keep their trust.

Mr Henfield said; “I did my best and I think most people will understand that I did my best. I rode out the storm with my people. The storm was very destructive to all of us,” he said on Friday.

“Stayed there long after and I remain with my people in North Abaco. We will need to stop until we recover all that Dorian has tried to steal from us. That’s where we are.”

There has been much criticism in the handling of Hurricane Dorian, including the rebuilding process. Yet, the area’s member of Parliament defended the government.

“Dorian was the first of it’s kind for any government in this region, anywhere in the world.

“There’s no textbook response that one could come up with for Dorian,” he continued.

“I think (in) the circumstances we did our best. We’re very pleased and grateful to God. We had a lot of help in the aftermath. People are still with us trying to help us recover and rebuild. You know you had wildfires in California. They have not yet rebuilt some of them. Puerto Rico, (Hurricane) Irma have not yet rebuilt.

“I think for a small developing country we did extremely well to be where we are now in our recovery efforts.”

You know what? At the start (before really) of every term each representative needs to lay out all the things they are going to achieve for their community and the country. Then we won't have to hear another one say "I did my best". What dat mean? What they will say is, here are the objectives set, these are the kpis, here's what we did, here's where we fell short here's where we succeeded. etc

Everyone is entitled to their opinion. Mine’s is if Dorian and covid didn’t happen things would be different. Unfortunately, we are going to blame everyone - ie, the govt, the mp, the politician- and hold them responsible for why our life isn’t what we want. If all they wanted was to be re-elected I would think they would give u everything unless the money isn’t there. I remember listening to the radio after the storm and ppl calling in about how I know a man who donate millions after. Really? Just cause a white man tell you he donate money doesn’t mean it’s true. Why all these ppl who allegedly donate money don’t have a wire transfer record, receipt, screenshot, why they ain’t already gone to the news. . I believe our islands and it’s inhabitants were happy with the unstable and bloated salaries that tourism brought for unskilled labor. Now the crap has hit the fan and we now we ready to hinge on to the fairytale that everyone gonna get $100,000 or whatever from aragonite. The government made mistakes no doubt about it. I think they need to get rid of some of these cabinet members and MPs. However, I am not voting for the PLP led by Davis and Mitchell. I am not voting for these third parties and their representatives on tv and radio speaking bad and broken English.

Bahamians don’t want sensible candidates who can actually achieve big things. They want these ppl who only could give out grocery and school supplies - that’s competency to y’all. I mean my god, if Lewis get on the news one more time talking about his community garden I’ll scream.

You remind me of directionless Minnis who readily admits never knowing whether he's headed east or west. Minnis is banking on his weak minded and lowly plebes thinking they only have a binary choice, PLP or FNM and nothing else.

Sigh, I guess we all can’t be trailblazers like you! Lol, no I’m not weak minded enough to give two licks of puppy shit what you think - or anyone thinks. Go vote for your independent candidate, no one cares. Go vote for the dna, no one cares. It’s seems only human interaction u get is from commenting online anonymously and trying to demean strangers. I don’t care what u think.

You are the Oracle of democracy and progress but everyone who disagrees with you is a plebe and a follower. Get a life!

When the independent candidate doesn’t make y’all rich in five years y’all will be running about their incompetency again. But, I hope it works out!

Here we go again. Tribanon and his Minnis fixation. His comments on our beloved PM is a waste of space.just imagine this man cannot let a day go by without seeking to insult our Prime Minister.

@Bottomdud: While I'm flattered by all of your attention, it's really Minnis who deserves much focus as the failed leader of government - not me. But feel free to continue flattering me as much as you want as you try carry water for Minnis in that leaking bucket with so many holes. You obviously have no inkling of what's going to be made public about Minnis once he dissolves parliament and sets the date for the national general election. Stay tuned! LMAO

Ah boy we.. Does give excuses to these wutless governments... I mean with 35 - 4 majority with all kinds of resources available to them.. This fnm administration was the great let down.. I mean with to former sitting PM's at his disposal he refuse their help... Don't get me started on this illegal immigration problem... The borrowing of over 2 billion dollars in less than 2 years in their term and nothing to show for it..

It’s your right to your opinion. It’s your right to vote for whom you like. I hope they make all your dreams, hopes, desires come true. I really do. I hope they don’t disappoint you. If you don’t feel like covid and Dorian effected the country’s resources that’s your opinion. When they call an election if there’s a change in govt I’m sure everything will revert to normal. We’ll be singing and dancing for tourist in no time. The rum gin can’t done. No more lockdowns baby. Shop til you drop. Prosperity, wealth. Whew baby. Taxi plate for everyone. The savings account will have all kinda zeros. Luckily for me, the quality of my life doesn’t depend on who is in government. So I guess I don’t hate them enough yet.

what you and the FNM fail to realize is the number of people who are done with ALL the foolishness. You assume if they point out your foolishness they must be for the other guys. But no, they just as foolish. Nobody forget 2012-2017. And nobody forget 2017-February 2020.

The very elitist and incompetent Henfield knows only too well that not even the Haitian-Bahamians in North Abaco will be voting for him in the soon to be called snap national general election. And rightfully so. No North Abaco representative has ever been more neglectful of the good people of that constituency.

If Henfield tried to hold an election campaign rally anywhere in North Abaco, he would be lucky if even you showed up for it. LOL

Mr. Henfield said “Dorian was first of its kind”. He probably meant Cat 5. Because, the Bahamas are hit with hurricanes regularly. Look at Freeport. If there is nothing else, why not really push for a hurricane plan-which doesn’t exist right now. Why is Bahamas Air charging family islanders to evacuate? What about hurricane shelters built on Abaco? What about post hurricane help like drinking water? This government relied on NGO’s for well over a year to provide clean drinking water in Abaco. And, when the NGO’s gave up after 15 months-poof! Drinking water gone! I am not taking political sides. But, he should be screaming for help-or maybe “doing his best” just isn’t good enough!

The Truth is that propaganda is only as effective as people are stupid.