Insight: Nygard Casts A Dark Shadow Some Will Find Hard To Escape From 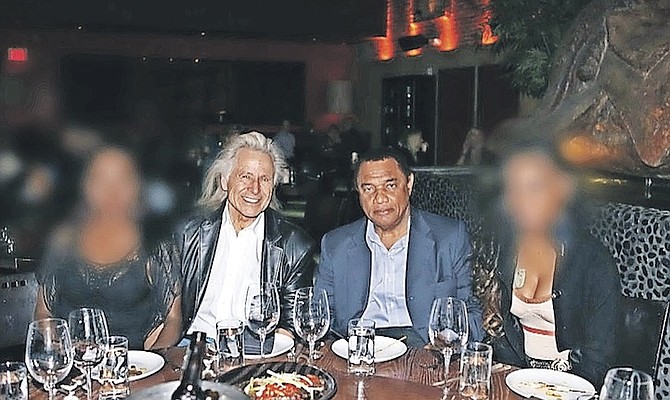 THE disturbing revelations about multimillionaire fashion mogul and long-time political donor Peter Nygard remain a dark shadow over the Opposition’s chances of reclaiming the government. Already having the reputation during its last stint of being a corrupt and scandal-ridden bunch, the Nygard case brings back memories of forgettable leadership.

The release of CBC’s The Fifth Estate news report covering the allegations made against Nygard over decades spent in Canada, the United States and The Bahamas detailed the sort of man Nygard is alleged to be. Among the images seen in CBC’s report were members of the former PLP government which was bounced by the Bahamian people in 2017. Seeing them consorting with Nygard as he celebrated and congratulated himself for the role he played in “taking the country back” was nothing short of an embarrassment.

Accounts by young girls who were at the time mere children, though, while still being unproven, were heard as we saw clips of the former Prime Minister alongside My Nygard.

Perry Christie was retired by the Bahamian people, but others who rose to political prominence along with him are still relevant in the party. Most notable is former Deputy Prime Minister Philip Brave Davis.

When asked about the PLPs relationship with Nygard amid the firestorm of accusations at the end of last year, Davis’ posture was not one of condemnation. Rather than taking the opportunity to rebuke the alleged abhorrent behaviour and send a strong warning to current members of his party that corruption and scandals would not be tolerated under his leadership, he instead attempted to deflect and steer the conversation away.

Preferring to discuss matters currently going on in the country, Davis said: “My position in respect to what I heard or not heard about him is that I’m more concerned about what this election is going to be about.

He added: “I’m not going to be involved in the lies that are going to be spun by the FNM and their surrogates. I will not stand idly by and allow the PLP to be scandalised. I will be responding to them when appropriate, but I will not be dealing with that subject matter to be distracted from what is needed in this country.”

By shying away from an opportunity, Davis is refusing to show he understands what is needed in the country.

Undeniably, we want a government that is going to help the economy rebound. But we must also understand an economic resurgence will be a slow process as long as tourism is the cornerstone of our economy and COVID-19 continues to be a mountain-sized hurdle in the way of the industry resembling what it was in 2019.

What we need is a government we can trust, and the reality is that the Bahamian people do not trust the current government. Further, the opportunity to govern the country is a contract between the people and elected officials to do the people’s bidding in a way that exemplifies transparency and accountability.

As more and more Bahamians are becoming disillusioned with the political process under the avalanche of political buzzwords like accountability and transparency, younger Bahamians see less of a difference between what political parties have to offer. This is a dangerous sentiment for a country that needs as much work as ours does.

But the fact remains life for Bahamians has gotten progressively worse under both PLP and FNM administrations.

And while the general consensus that opinions, one way or the other, on Peter Nygard do not begin to tackle the laundry list of issues that exist in our country may be true, Davis’ inability to exhibit something different from the PLP we’ve come to know is disappointing, but also telling.

During a time where campaigning may not come in the form of large rallies and grandiose campaigns, platforms and perhaps even more so, reputations, matter more than ever. Say what you will about the PLP and the FNM, but when the word corruption comes to mind – a hallmark of the 2017 election – the PLP still remains under the shroud of its shadowy past.

Moreover, during a time when a government should be judged on what it was able to do during its term, there is still much that will be said about their challengers’ inability to prove itself trustworthy. As for what will dominate the conversation as election nears, we will have to wait and see.

However, Nygard’s affiliation with the PLP will continue to shadow the party in election season, in addition to the government’s performance during this term.