Bowleg And Team Bahamas Touch Down In Puerto Rico 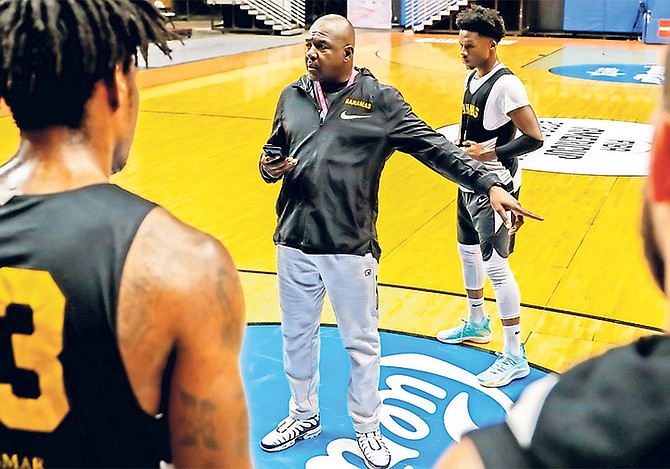 HEAD coach Mario Bowleg and the men’s national basketball team are set to face the United States which will prove to be their toughest test in their FIBA AmeriCup 2022 Qualification bid in the third and final leg of the process on Friday and Sunday.

Team Bahamas is set to face its toughest test in their FIBA AmeriCup 2022 Qualification bid this weekend in the third and final leg of the process.

The full roster has arrived in San Juan, Puerto Rico, and head coach Mario Bowleg said he is optimistic about its prospects following their first practice session.

The Bahamas is slated to take on the United States of America on February 19 and Puerto Rico on February 21.

“The energy that was displayed by the entire team showed that they are ready to face this challenge of trying to win both of these games in this upcoming window. Our game plan and preparation for both teams has been put in place, but we will continue to work on those things, continue to improve on the things we need to improve on until game time,” he added.

“Playing teams like the US and Puerto Rico, we want to be able to switch on everything in man-to-man situations. With multiple players in that 6’7-6’8” range we are able to do that. Once we are able to compete we give ourselves a chance to win and that’s all that matters.”

Bowleg, who also serves as president of the Bahamas Basketball Federation men’s national basketball team returned to the sidelines while Chris DeMarco is unavailable due to prior commitments with the NBA’s Golden State Warriors. He will be assisted by Perry Thompson Jr and Moses Johnson.

“Having veterans around along with young pieces gives me a good feeling that we are well balanced. There are some pieces that have experience that will give us an opportunity,” Bowleg said, “We hope that the country will continue to keep us in their prayers and give us the moral and mental support we need from them.”

The Bahamas dropped to 1-3 at the group stage of the qualifiers and moved into a tie with previously winless Puerto Rico.

The Bahamas will need a win over Puerto Rico or two losses from Mexico to have an opportunity to qualify. The Bahamas holds the tiebreaker over Mexico by the aggregate score of the first window last February.

The top three teams from each group will qualify for the FIBA AmeriCup 2022. AmeriCup is the FIBA Americas championship. The United States won the last edition of the event in 2017.

Team USA is currently 4-0 and guaranteed a top three spot and AmeriCup berth.