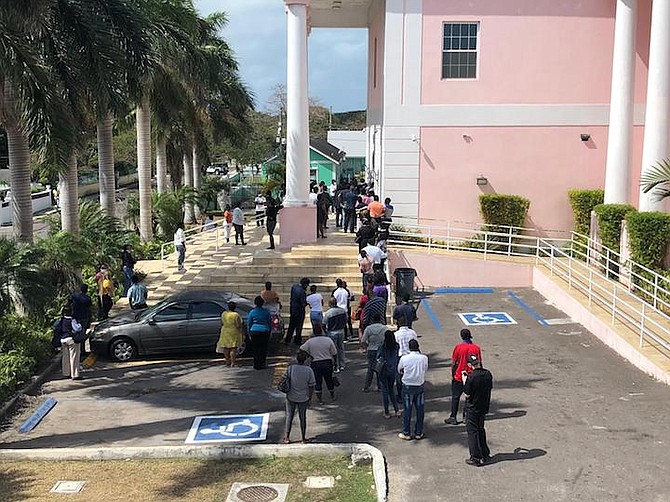 The scene outside the building on Thursday morning.

A BOMB scare in the Magistrates Court building forced hundreds to evacuate the complex on Thursday morning.

Police said they received reports of the possible bomb threat shortly after 9am.

According to press liaison officer, ASP Audley Peters, officers from the bomb technician squad were dispatched to the scene as soon as they got the call.

Speaking to reporters at the scene, he said: “A sweep of the building was conducted with the use of the bomb dogs and following that sweep, the building was determined to be cleared of any suspicious items or any bomb related matter.”

During the incident, a handful of court staff, attorneys and civilians flocked to the parking lot and the side of the street as they waited for officials to complete their investigation.

Police gave the all-clear signal shortly before noon and judicial proceedings were able to resume as usual.

ASP Peters said although nothing suspicious was found in the court building, officers are not categorising the incident as a prank at this time.

“At the moment we won’t say that it’s a prank nor a false alarm because individuals’ intentions, we don’t know what they are.

“This matter could (have affected) not only just the building itself, but the perimeters of the building could have been compromised as well. So our officers are encouraged to continue their investigations.”

If they ever start making real bombs in The Bahamas, sorry for us because I truly doubt that we are equipped to handle it.

luckily D averages are more than likely to blow themselves up before ever finishing a bomb.

Can't help but wonder which lawyer was not ready to proceed and needed to buy some time.

Haven’t had one of these in a while ay? Think they were able to trace the last ones and find the culprits. But during college days during exams, bomb threats were as common as toilet paper.. then sometimes they would call one in at the girls dorm in the middle of the night and they would have to stand outside in the snow while the dorm was searched by the fire marshal and police.