Pintard: We Could Have Done Better 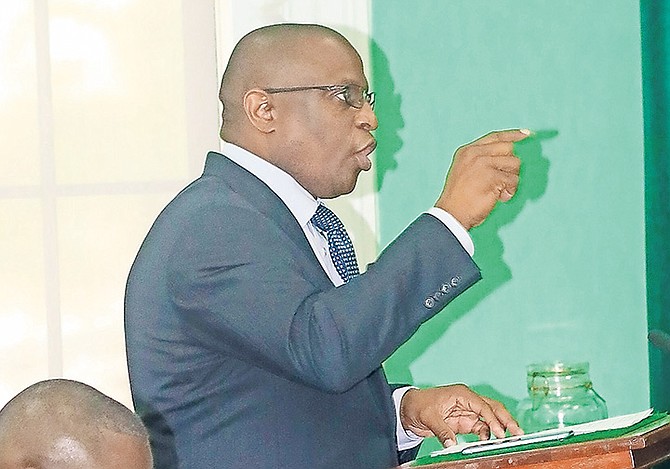 MARCO City incumbent Michael Pintard admitted yesterday the governing Free National Movement “without question” could have done many things better during its term in office, but maintained the party is the better choice for Bahamians.

Speaking to The Tribune, the newly ratified representative suggested, however, that it may be too early to begin election campaigning.

Instead, Mr Pintard said both he and his constituency’s executives have decided to continue to focus on the needs of the community.

“We’ve made a determination in Marco City to continue to do what we’ve been doing which is one, to build a strong coalition that is made up of persons who have very little interest in political parties, members of the Free National Movement who have every strong support in my estimation in Marco City, members of other political organisations who would’ve in the past supported the PLP or the DNA to build a coalition around dealing with common challenges facing the community.

“We will continue that campaign and we believe that after an election it’s not the time to watch colours. That’s the time to solve what we have been mandated to.

“The second thing that we will continue to do is when we knock on doors our priority is to find out what are your challenges, how can we help you as a partner and meet those and how can we better serve you.

“It is entirely too tough in the constituency for my primary business and focus to be asking persons to support me the next time when I still have some additional supplies I am sourcing to help them plug a hole in the roof.”

He said they have also made the choice to focus on food insecurity and in response run a robust meal assistance programme.

Asked if the FNM had done enough to win the confidence and trust of voters in the next election, Mr Pintard said the party has.

“Yeah, I think when persons look at the impact of (Hurricane) Dorian on the country, we lost two of the three economic centres in the country. When persons look at the impact of the pandemic and its impact on the economy, I think they would ask the question whether or not this administration has managed this in a way that will be markedly better than the alternative, had they been in the same position.

“I think the average person will say we have done a better job.”

He continued: “Have we done a job that has ameliorated all the concerns of persons? Of course not. We are challenged as a country.

“Could our posture (have been better)? Without question. But if you were to conduct a comparison, I suspect Bahamians would say that while in some areas I am not pleased, I believe that this is a better choice going forward.”

Here we Pintard trying to sell voters that same old tired political hogwash by saying both the FNM and PLP are incompetent and no good, but the FNM is still better than the PLP. That's the same two-party game that Ingraham and Christie hoodwinked the Bahamian people with for many years as they took turns enriching themselves and their cronies by selling the best our country has to offer to foreigners.

Minnis and Davis are only too happy to tell us we have no choice but to continue playing this two-party game that has resulted in our financial ruination. These two imbeciles will each try paint the other as the more incompetent and evil of the two, when in fact they are both equally bad for our country. As I've said time and time again, there's only one solution to this madness and that's for all voters to support an independent candidate in the next election who has no close ties to either the PLP, FNM or DNA.

Sadly it's true though. The FNM surely could have done many, many things better but the PLP would have put us further into a financial crisis. The PLP simply don't think about the financial wellbeing of the country. They take and borrow and take what they borrow and then sabotage their own chances of getting reelected to that the FNM can claw back some form of fiscal constraint. Then the PLP get in again and continue taking and giving and borrowing.

The Minnis-led FNM administration has been on a borrowing binge like no other since May 2017, and well before Dorian and COVID-19 came along.

Independent all the way baby! I don't care if it gives the election to teh other party. Maybe it will get them to walk a sensible line.

I agree with supporting an independent in the next election. I am a long time FNM supporter but in no way can I support the FNM as is...sadly. I listened to the talk shows speaking to the fact that many of these persons are career politicians and in the real world they cannot make it. Pintard is one of these career politicians. Many of them have been caught up in shady situations , supporting special interests, all speaking to their lack of integrity. The Bahamas is becoming a failed state and things must change.

Mr: Pintard of toggie and boggie fame. The FNM Government has made the life of Bahamians extremely hard'

60% increase in VAT hurts the poor.

But this is the best job Mr: Pintard has ever had. A salary every month to produce zero.

check the record the FNM Government has put the Bahamas in a serious financial crises.

No administration has been as bad for Grand Bahama as the minnis led FNM. None.

Pretty accurate statement Proud, but they barely outdid the last PLP admin which really tried to dismantle the H.C.A. by requiring all licensees to individually go beg to maintain their concessions. Of course the Port and DEVCO secured their own 25 year extension thereby throwing the licensees under the bus. The shortsightedness of the Principals is only exceeded by their self preservation and lack of vision. Same with PLP and FNM Governments alike, their lack of understanding of the HCA is exceeded only by their obstinacy, personal greed and willingness to destroy.

they always do this. if they spent more time pushing back against crazy initiatives like Oban they wouldn't have to. All of them sat back and said nothing while a shady character committed forgery in the highest office in the land. Not one said a peep. And they had their media man who would justify everything they failed to do by explaining the meaning of the word "is". Every mistake was explained away with "well I could see how...". Should they by miracle get in again I would hope they don't allow us to suffer under another strongman