Diane Phillips: Why Are We Blind To What Outsiders Can See? 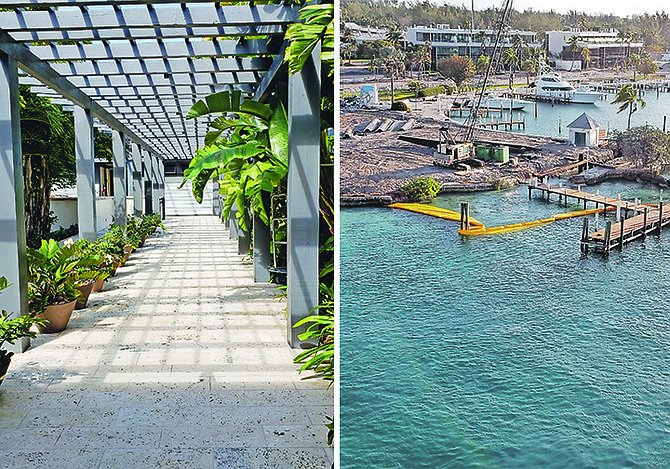 Island House and, right, the Hurricane Hole Marina pictured from atop the bridge.

SOMETIMES it takes someone from afar to show us what is right in front of our faces.

Take the case of Hurricane Hole Marina, an iconic landmark that few of us ever gave a second thought to unless we happened to sail by it or enjoy the mahi-mahi burgers at the old Green Parrot. That somewhat makeshift, but eternally popular, restaurant is gone now, the area flattened, making way for part of what will become a nautical based downtown Paradise Island. There’s no doubt it will be hugely successful, both for the developer, Sterling Hurricane Hole, and for the public that will patronise its restaurants, shops, marina and office space.

But this piece is not about them nor even their decision to take a tired and underutilized piece of geography and transform it into a vibrant mini-metropolis. This piece, in fact, has little to do with Sterling except as it serves as an example.

This piece is about us.

Why didn’t we think of it? Why did it take someone from afar to see and act upon what Bahamians were blind to or turned a blind eye to? Even I did not swallow that concept until Sunday when a friend and I were walking the Paradise Island bridge and I looked across at the construction site, the marina expanding over the upland that was once a parking lot, the multi-storey buildings appearing near-completion.

How many times have we driven over the Paradise Island bridge and looked down and neglected to see what a Canadian like David Kosoy saw when he peered at the same sight? Yes, Kosoy has lived on Paradise Island for a long time, but he still had the keen eye to see that which was staring him in the face and act on it. I don’t know how long negotiations to buy the property from Atlantis owners, Brookfield, took or how intense they were. I can only imagine. But I do know this. There are plenty of Bahamians who could have rallied the same resources Kosoy and his team did and created an urban oasis. But they didn’t. Nor did they see the acreage directly across the street from the Office of the Prime Minister on the old Roy West/NatWest/ Coutts property where the multi-million-dollar Goldwynn luxury condo development is rising, nor did they pour their parents’ or their own money into rescuing the stately Royal Bahamian and creating a Sandals, nor building The Pointe, or developing Port New Providence, Palm Cay or significant properties in Exuma.

Why are Bahamians so reluctant to invest in the number one industry, tourism, in their own country? The Bahamas Chamber of Commerce and Employers Confederation, like many prominent voices in financial services, consistently points out the challenges of access to capital. Those challenges are real, but let’s face it, if others can raise development monies through funds they manage, why can’t Bahamian groups do the same? There are hundreds of funds listed on the Securities Commission of The Bahamas. While there have been and continue to be many Bahamians who succeed in related businesses, especially excursions, attractions, restaurants and fast-food establishments, few are willing to take that leap upward, bridging the frightening chasm between serving food and serving hotel guests.

In New Providence and Grand Bahama, you can count them on one hand – the George Myers and late Roy Bowe group who opened Comfort Suites on Paradise Island in 1999, 22 years ago!

In Cat Island, the Armbrister family ran Fernandez Bay Villas, and there are numerous other examples, including Hope Town Harbour Lodge in Abaco.

But the vast majority of known properties in The Bahamas were built by or operated by non-Bahamians. Even Small Hope Bay Lodge in Andros, now as Bahamian as anything you will find, was originally built by then-Canadian Dick Birch in 1960. The Birch family has since been major contributors to Bahamian culture and the good news about the foreign-fed, Bahamian-bred blend of touristic development is that eventually the Bahamian in the culture ascends. Yet the reality exists, it did not originate that way.

The history of others going where Bahamians, even rich Bahamians, feared to tread is packed with examples. One notable exception is the Holowesko family who built The Island House, a stunning near-Zen-like sophisticated addition to the hospitality offerings of The Bahamas. It’s easy for others resting on the soft cushion of their resentment to criticize families of wealth even if most of that was earned by the current generation. The publicly expressed resentment makes it easy to understand why many Bahamians are reluctant to expose themselves to public scrutiny so the Holowesko family which generally prefers to stay in the background deserves even more credit for taking the dive into tourism, miles out of their comfort zone.

As everyone calls for a new and smarter economy, arguing we have outgrown the Stafford Sands model of big box hotels (though the jury is still out on that) and urging that we find innovative ways to move forward, maybe the time has come for more locals to step into up to the courageous path of those folks who came from abroad, saw a vision and dug their heels into hospitality, welcoming visitors to the most beautiful little country on earth. Remember the lesson of one of the greatest hoteliers of all time, the recently deceased Butch Stewart. Before he created the now renowned Sandals brand, Stewart had little more going for him than a history of peddling the family’s appliance sales business and a task to fill a dilapidated building turning it into a place where people would want to stay and the family could unload some of its overstocked appliances.

THE MINISTER HAS BARED HIS TEETH

JUST like Bahamians are the last to recognise the value of what’s in our own hospitality accommodations backyard, those from abroad have been reaping the benefits – or some would say raping the resources – of our marine life for decades.

Kudos to Environment Minister Romauld Ferreira for kicking butt. Ferreira not only brought us legislation creating a body of environmental protection laws last year, he started this year off right with reigning in foreigners who have been seizing minerals and marine life from our seas in the name of research and development for decades.

We only have ourselves to blame ourselves for not monetizing the use of our waters just as we finally are our air space.

If those who took also gave and contributed significantly to our economy, leniency would be understandable but one-way love affairs rarely work out in life or in business.

Ferreira started off slow, but he is fired up now and, in this environmental preservationist’s mind, has done more to protect the environment of The Bahamas than anyone in a similar position who came before him. Maybe the timing was right as well as Bahamians become more outraged at plundering and more sensitive to the fragile and expendable nature of our resources.

Agriculture and Marine Resources Minister Michael Pintard has also shown strong prophylactic tentacles and it’s hard not to understand why the two ministries are not joined together because how do you talk about environment in The Bahamas without talking about marine resources? But what do I know? I steer clear of partisan politics and only venture out when the environment is concerned.

Just as a token reminder – remember when Save The Bays was blatantly falsely accused of being an insurrectionist movement? Ferreira and Pintard were both directors as was I along with Bahamians who invested in The Bahamas like Stuart Cove. Just FYI.