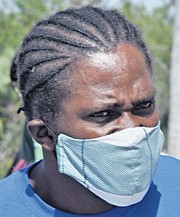 A 36-year-old man of Eight Mile Rock was charged in the Freeport Magistrate’s Court yesterday with attempted rape.

Eric O’Neil Strachan, of Andros Town, Hanna Hill, appeared before Deputy Chief Magistrate Debbye Ferguson. He was not represented by an attorney.

It is alleged that on February 15, at Eight Mile Rock, the accused attempted to have sex with a 74-year-old woman without her consent.

Strachan was not required to enter a plea to the charge.

Prosecutor Inspector Anthony Sawyer objected to bail and said the prosecution intends to have the matter fast-tracked to the Supreme Court by a voluntary bill of indictment.

Strachan asked the magistrate about being given bail. Deputy Chief Magistrate Ferguson informed him she was not able to grant him bail, but told him he has the right to apply to the Supreme Court for pretrial release.

She instructed the court bailiff to present Strachan with the application.

With the application forms in hand, the handcuffed accused said: “I am not a good reader.”

He then asked if he could pass the forms to his mother who was expected to bring him a change of clothes at 4pm. “Can I call my mother and talk to her for the first time, please?” Strachan asked.

The magistrate asked the officer to allow Strachan to make a call to his mother so she could assist him with filling out the bail application form.

She adjourned the case to May 19. Strachan was remanded at the Bahamas Department of Correctional Services.