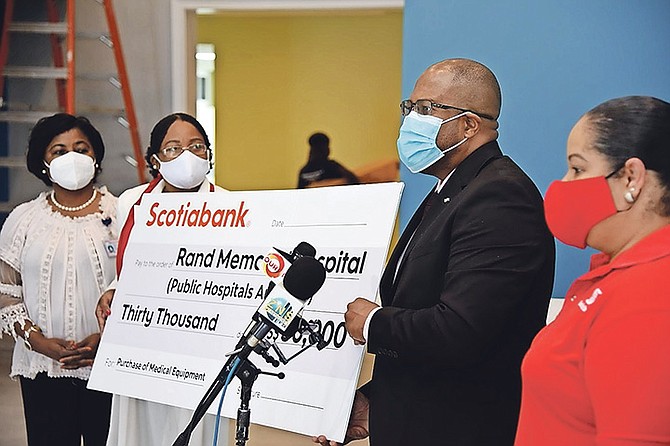 Scotiabank managing director Roger Archer presents a $30,000 cheque donation on Friday to the Rand Memorial Hospital in Grand Bahama. Mr Archer was also given a tour of the Paediatric Unit, which is under renovation. Photo: Preston Knowles Photography.

A $30,000 cheque donation by Scotiabank Bahamas Limited was made on Friday to the Rand Memorial Hospital in Freeport where major renovations are underway to restore the public health facility which sustained severe hurricane damage.

Roger Archer, managing director, said the institution wanted to contribute to the restoration efforts of the hospital, particularly to help purchase much-needed equipment for the Paediatric Unit.

“We know it is really a difficult time over the last two years between Hurricane Dorian and COVID; the hospital has been doing excellent work and we want to continue to contribute to the efforts of the hospital.

“We want to ensure the hospital is in the position to help the community overcome COVID, and so this $30,000 will help with the purchase of a ventilator, oxygen monitor machine, and also two paediatric wheelchairs.”

“It has been a year since the devastation of Hurricane Dorian, and we are well on the way to recovery as you can see the facilities are much further in the restoration process. It is through the support of the Bahamas Government, and partnerships with companies and organizations like yourself that we are able to provide more effective care for the community of Grand Bahama.”

After the presentation, Mr Archer was given a tour of the hospital’s Paediatric Unit.

The Rand has been closed down for repairs since September 2019 as a result of severe flood and structural damage due to Hurricane Dorian. The facility, condemned as unsafe for occupation, is undergoing renovations of more than $20 million.

Last week, Prime Minister Dr Hubert Minnis toured the Rand to see the progress of work. He said that work is “progressing very rapidly” and noted that his government plans to move ahead with designs for a multi-storied addition to the hospital.

He said the Beck Group, which designed the Critical Care Block at Princess Margaret Hospital in New Providence, is the same company designing the new hospital here in Grand Bahama.

“That’s a four-story complex, but it would be designed in such a way as the population continues to grow it would be able to move to the fifth and sixth floor as it is necessary,” Dr Minnis said.