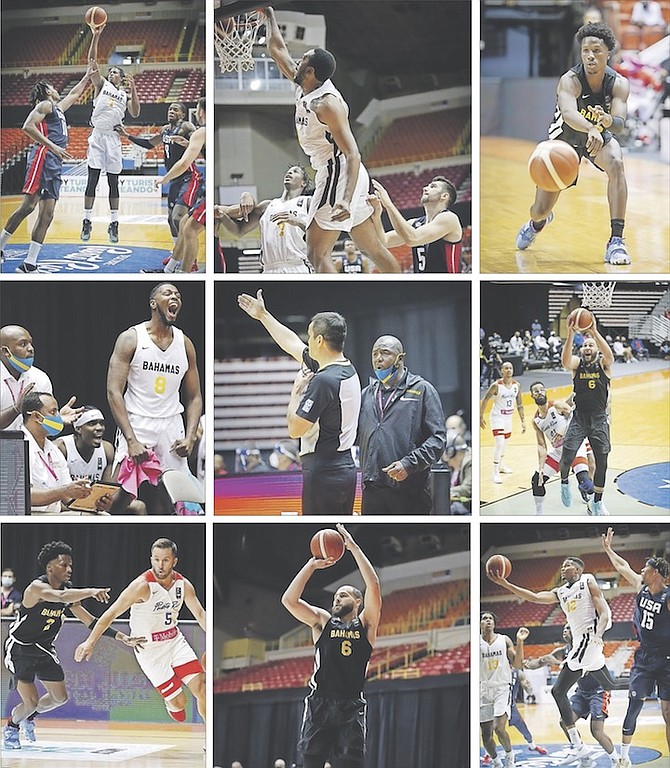 TEAM Bahamas experienced another fourth quarter collapse against Puerto Rico and saw their FIBA 2022 AmeriCup qualification bid come to an end on Saturday night. The Bahamas took a nine-point lead into the fourth quarter but the hosts rallied for a 102-97 win at the Roberto Clemente Coliseum in San Juan, Puerto Rico.

Following losses to The United States and Puerto Rico last weekend in the third and final window of qualifiers, The Bahamas finished the process with a 1-5 record and failed to advance out of Group D.

Against Puerto Rico, The Bahamas took a nine point lead into the fourth quarter but the hosts rallied for a 102-97 win Saturday night at the Roberto Clemente Coliseum in San Juan, Puerto Rico.

Mychel Thompson led six Bahamians in double figures with a team high 21 points, 15 of which came in the first half. Travis Munnings had a near triple double with 14 points, seven rebounds and nine assists, David Nesbitt scored 13, Domnick Bridgewater scored 12, while Kentwan Smith and Tavario Miller each scored 10. D’Shon Taylor added nine points and Jaron Cornish scored eight on a perfect 3-3 night from the field.

“In this window, it just shows that you have to play 40 minutes of basketball. I thought we were a better team than Puerto Rico, taking nothing away from them, I felt that we had the size, the length, and the shooting ability to defeat them. We were on the way at the end of the third into the fourth, they went into the zone, which we knew was coming, we were prepared, but I think we just didn’t stay disciplined,” Team Bahamas head coach Mario Bowleg said. “If I were to take anything away from it it would just be remaining focused and staying disciplined to what we want to do against the zone or any defence that is thrown at us.”

The game featured 20 lead changes alone in a back and forth first half. Barea’s three pointer at the end of the first quarter gave Puerto Rico a 22-20. Smith made a late three in the second, but Puerto Rico maintained a 52-48 lead headed into the half. The Bahamas took control in the third quarter when they outscored Puerto Rico 31-18.

They opened the quarter on a 7-0 run, capped by a Bridgewater three to take a 55-52 lead at the 8:13 mark. Miller scored The Bahamas’ final six points of the quarter and his dunk with eight seconds remaining gave the team a 79-70 lead headed into the fourth. Puerto Rico came back from a nine-point deficit to tie up the game at 84 with 6:53 remaining on a Clavell three. Puerto Rico went on a 9-4 run and a Napier three gave them a 93-88 lead with less than four minutes left to play. They outscored The Bahamas 32-18 in the fourth quarter.

“I think we struggled against the 2-3 zone, even though we put in an offense to combat that, I thought the guys moved away from that and that hurt us. Even when we had an opportunity to make a run or two, I just thought we had some poor calls by one particular official that just killed us,” Bowleg said, “We are confident, we believe we can beat anyone in the Americas where we have our A team, B team or C team. We can compete with anyone and you have seen it in every window. At the end of the day, I think we will continue growing from this and we will be a team to reckon with in this Americas region.”

In November at the third window, hosted in Indianapolis, Indiana, The Bahamas went scoreless in the final 5:43 of the game and was outscored by 10 in the fourth quarter of a 91-85 loss to Puerto Rico.

Nesbitt said it was an all too familiar position for Team Bahamas, who had several opportunities to qualify but ultimately came up short.

“They adjusted. They switched to a zone in the fourth quarter and we made a lot of errors on transition baskets. Credit to them, they took some big shots from three in transition and they made them,” Nesbitt said, “We got a little stagnant on offense, started turning the ball over, started taking some bad shots, some of our guys got in foul trouble, credit to them, I don’t want to take anything away from Puerto Rico, but we had the game in our hands. It’s tough always being here, I feel like we have a lot of games in our hands and we just let them slip away at the end.”

The Bahamas opened this latest window with a 93-77 loss to The United States, Friday night at the Roberto Clemente Coliseum.

Bridgewater scored the game’s opening basket, but the Americans responded with an 11-0 run. They came within three on a Miller jumper, but the US took a 25-19 lead at the end of the quarter.

The Bahamas opened the second on an 8-2 run and built their momentum behind an alley oop from Thompson to Taylor, followed by a massive block from Bridgewater on Thomas that resulted in a fastbreak and Taylor dunk at the opposite end. The USA settled in and went on a 14-2 run to end the half and took a 54-40 lead. They outscored the Bahamas 39-37 in the second half.

The United States topped Group D with an undefeated 6-0 record, while Puerto Rico finished 3-3 and Mexico was 2-4. All three will qualify for the 2022 AmeriCup.