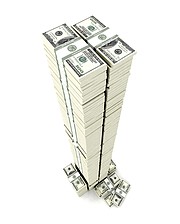 ACCOMMODATIVE monetary policy can trigger a rise in inflation.

EARLIER in the year many analysts shared their predictions for how we could expect the financial markets to behave in 2021. The very large majority foresaw a continuation of the stock market rally that emerged in the aftermath of the pandemic. The underlying conditions were, after all, expected to remain in place, with protracted dovish monetary policies and robust asset purchase programmes of the main central banks dictating the course of the events.

However, after the surprise win by the Democrat candidates in the Georgia run-off Senate elections, the chances of President Biden’s $1.9tn fiscal stimulus package obtaining the approval of the US Senate increased dramatically and the result is that, for many, the terms of the equation appear to have changed. The spectre of inflation is becoming more present, as the topic trends among investors concerned by the impact a potential rise in consumer prices may have in the markets.

Prospects of a stimulus-backed recovery in the US economy increased expectations of higher inflation - which could potentially dilute the value of the income generated by bonds - convinced some investors to sell their portfolio of treasuries, driving down their prices and increasing the yield; there is an inverted correlation between price and yield, meaning that when one goes up the other falls, and vice-versa. This recent rise in bond yields forced investors, who until recently had been strongly committed to the stock markets, to consider their stance and ponder a less risky approach to investing.

Over the last year, many investors driven by the uncertainty generated by the pandemic drifted towards safe haven assets such as US treasury notes. Higher demand drove up the price and decreased the yield, forcing many market operators, desperate to generate income, to invest in riskier assets such as shares: to some extent this dynamic explains the incredible rally in stocks recorded over the last 11 months. So, if the prospect of a rise in inflation, that would dilute the value of the very low income generated by the bonds acquired during times of high demand led some investors to sell them, it is also likely the opposite scenario will generate a bond rush, which can potentially dent the performance of stocks.

If bond yields continue to rise and reach the 1.75 percent mark, many stockholders will once again look at such instruments as viable investments, that besides generating an inflation-beating income are also considerably less perilous than shares. Such a scenario would trigger a sell-off in the stock market by traders eager to cash-in their profits and migrate their portfolios to much safer high-rating government debt.

It’s not yet clear we are entering an inflation-dominated era, as it would entail a much rosier picture in terms of economic activity than the one we currently face, as illustrated by the disappointing American employment data published last Thursday, which had a cooling effect in such projections. It is nevertheless undeniable that fiscal stimulus and accommodative monetary policies form a powerful cocktail, one that could overheat the economy, forcing the Fed to revise its monetary policy and end the deflationary trade of the last 11 months.