Are You Up For It, Pm? Davis Lays Down New Challenge For Election Tv Debate With Minnis 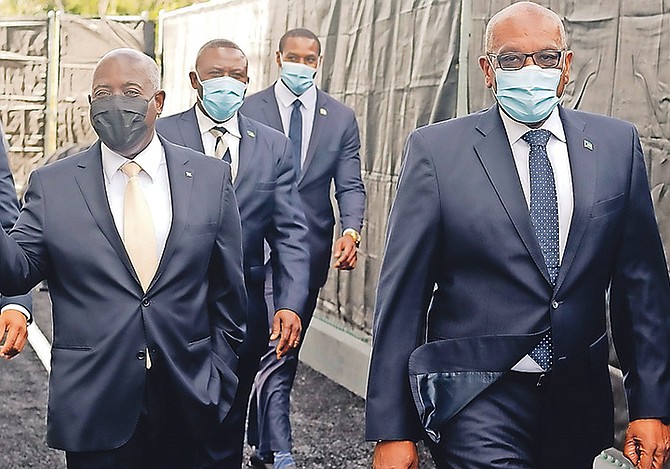 Dr Minnis, however, did not reply when asked moments earlier if he would debate Mr Davis.

The men had just finished attending an event yesterday marking the opening of the new Macfit360 facility in Cable Beach when reporters surrounded them.

“I’ve said it before, that I am (willing to debate),” Mr Davis said. “If he wants to, I am here. I was asked before whether I would be prepared to debate the Prime Minister on a national stage, I said yes and I am, and I asked you to ask him whether he is prepared to.”

Mr Davis, who hosted a press conference at the PLP’s headquarters last week, has contrasted his accessibility to the press with that of Dr Minnis.

Would you like to see a televised debate for the next election?

He said: “You know what’s so interesting? I’m here standing up responding to your questions and I can’t remember ever seeing y’all ask him questions. Don’t you think it’s time for him to be answering y’all?”

“I think disappointment is putting it mildly,” he said. “Bahamians today are suffering and they need to hear words of hope and inspiration to assure them that this government is doing something to get them out of the misery that they are now enduring. No such plan or vision was articulated by the Prime Minister yesterday. The time has come for the Prime Minister to stop looking out for himself, and start looking out for the Bahamian people.

“When I say looking out for himself, he’s more engaged in an attempt to find ways and means to re-elect himself or have himself re-elected than finding the solutions for the problems that our communities are enduring today.”

Mr Davis was asked if Bahamians deserve public disclosures about the health of those vying to lead the country that is similar to the transparency that usually characterises presidential politics in the United States. US presidential candidates usually release official assessments of their health.

“Health is always a question,” Mr Davis said. “I don’t know whether there are any issues of health relating to (the Prime Minister) or I and if there are any questions, they can be asked but I’m not aware that the Prime Minister has any issue that we ought to be concerned about. I don’t have any that I could be concerned about. I have none of the diseases that usually afflict the Bahamian people, so I know that my last health bill was clean, and I have no issues with my health.”

Mr Davis was diagnosed with COVID-19 last year and recovered from the disease in a US hospital after a brief stay in Doctors Hospital.

There's no chance in hell of Minnis accepting such a challenge because he knows better than anyone else his complete inability to think quickly and sensibly while standing on his own two feet in any mano-a-mano situation.

Minnis also knows he's much more adept at making use of his vile arrogance, nastiness and vindictiveness to intimidate others behind the scenes, usually in a most deceitful and despicable bullying manner.

Have you ever heard Mr. Davis speak?? Donald Trump of the Bahamas he is!

Quite frankly I don't care if they do or don't . . . but I DON'T THINK BRAVE MEANS IT. . . I can tell that Doc has been taking speech classes. . .Brave may be in for a shock!! He need Fred to debate for him. . .now Doc will get his "behind handed to him" if he go up against Fred. . .but Brave. . .now yinna know that Brave can't carry a cogent though in a basket to save his life!! He better go sit his behind down before Doc make him look like a fool!

no debate. roll out, do it like we always did , or become like america. we are not americans but bahamians. we do it our way.

if we are going to copy cat, let us copy cat the presidential race also. only two people on the ballet for prime minister , and the winner, takes it all and forms his cabinet. just saying. since we want to copy everything the states does.

Tell Davis stop that nonsense. Where was his debate talk when Branville was challenging Christie to have a debate before the 2017 election. I didn't hear a peep from him. Please stop with the political stupidity. the silly season is really starting too early.

Another reason for a FIXED election date to keep all this silliness from starting too soon.

You sound more fearful of Minnis going mano-a-mano with Davis in a televised debate with an impartial moderator and fair rules than Minnis himself is.

Frankly, for many it's not the least bit surprising that 'Bully' Minnis is much more of a coward than 'Yellow Belly' Davis is. LOL