Grieving Mum Begs: Give Yourself Up 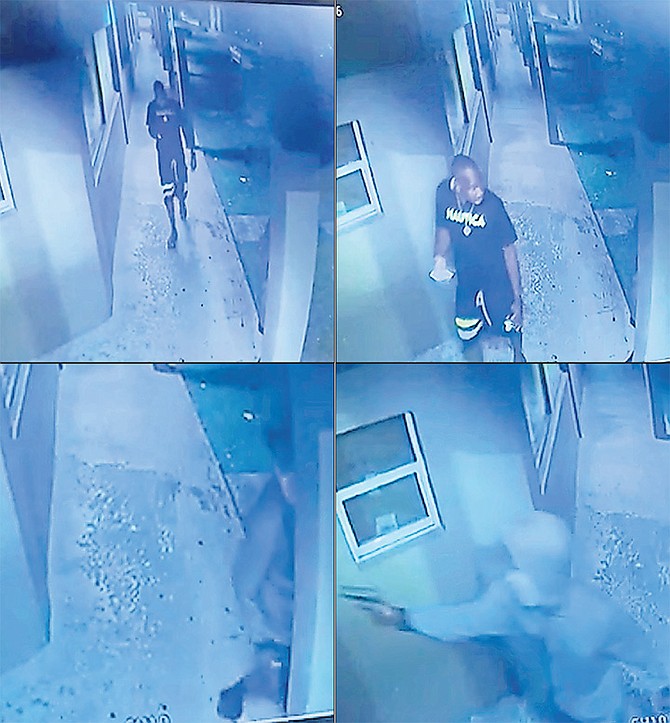 VIDEO footage show Omar Penn walking at the scene of the shooting. He looks directly at the gunman before walking on - with the gunman then turning after Mr Penn then raising the gun and following him.

THE mother of Omar “Punch” Penn is calling on the gunman who killed her son “like an animal” to turn himself in to the police.

Margaret Moxey-Pennerman last saw her son alive around 4.30pm on Sunday, several hours before he was shot dead in front of Island Luck web shop on East Sunrise Highway around 8pm.

She was asleep when she received a call later that evening that her son was shot dead.

Penn, 41, is the father of five children. His murder is the first homicide on Grand Bahama for 2021. No arrest has been made however police are following significant leads.

Surveillance footage circulating on social media shows Penn walking along the building’s exterior when a man in a hoodie approaches and opens fire on the victim.

When The Tribune visited Ms Pennerman on Tuesday afternoon at her residence in Freeport, she recalled the last time she saw Penn, the fourth of nine children.

“Punch been here around 4.30pm and had something to eat. And before he gone, I say, ‘why you look like that? He say, ‘mommy I just tired.’ He tired of everything, and I say, ‘where you going?’ and he said he going home,” she said.

Hours later, someone phoned her to tell her that her son had been shot.

Ms Pennerman said that she felt numb initially after learning of his death.

“I am only trying to hold together, but it dawned on me before I went to the morgue. After I came from the morgue, I felt down. He has five children, including a special child,” she said.

Penn had survived shooting attacks before and was wounded in October 2018. A man was later charged with attempted murder in connection to that incident. Penn was also shot in early 2019 but survived the attack.

However, his mother said her son was a wonderful person who would help anyone.

“He was loved by so many people, and he was a very good person. He had his way, but to be honest he is loved by everybody. He would give you his last; He don’t care what he had to do with it, if you in need he will take care of you, he will give you something. He ain’t going to let you go to bed hungry.”

Meanwhile Superintendent of Police Terecita Pinder said police are aware of the rumours and video circulating on social media about the murder.

She said an investigation has been launched into the matter and if any officer has been found breaching policies regarding social media, they will be dealt with.

“We want to ensure the public that an extensive investigation has been launched into this matter. Let it be known that the Commissioner of Police Paul Rolle previously implemented a series of policies in regard to the use of social media in the RBPF. These policies were implemented with an aim to establish procedures that strictly govern the dissemination of sensitive information in the organization.

“To this end, if it is found that at the conclusion of this investigation that this policy has been breached by any member of the RBPF, rest assured they will be made to give an account for their actions and dealt with to the fullest extent of the law,” she warned.

Supt Pinder said no one is in custody in connection to the killing and urged the public from spreading unconfirmed information on social media that can potentially prejudice the case.

“The police are following significant leads in the case, and we are doing what is necessary to ensure that this matter is successfully concluded. We are, therefore, urging the public that if you have any information that can assist in this investigation to contact CID at 350-3106 through 12.”

She could not say if the killing was a retaliation.

Um. Your son was an animal. And he is not going to be missed in the least...