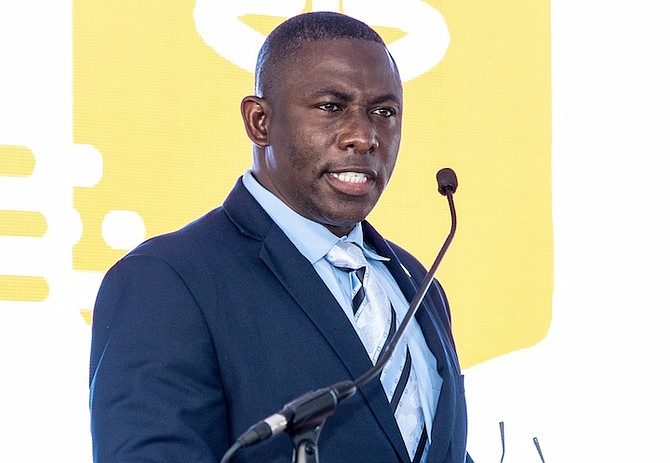 THE country is expected to receive its first doses of the Oxford-AstraZeneca vaccine by the end of the week, according to Health Minister Renward Wells - and Mr Wells said the government will likely use all doses at once to give 100,000 people their first shot.

Health workers could begin administering the jabs “as early as next week”, he added.

Speaking to reporters yesterday, Mr Wells described the vaccine’s upcoming arrival to The Bahamas as “good news” and again urged Bahamians to get vaccinated against the COVID-19 threat to assist with the country’s economic rebound from pandemic.

“We’re looking at (having the vaccines) sort of the end of the week as was intimated by the Deputy Prime Minister,” Mr Wells said before heading into a Cabinet meeting.

As it relates to distribution, officials have previously said they will follow the scientific recommendation that a two-dose regimen be administered, meaning 50,000 people will be eligible to receive the first shot of the 100,000 doses while the second dose will be administered 12 weeks later.

However yesterday, Mr Wells said the government will likely use the first batch all at once to vaccinate citizens, meaning that if 100,000 doses have been shipped to the country, 100,000 people will be able to be vaccinated.

He said: “We have always talked about the 100,000 dosage which is about 50,000 doses if you give everyone two doses, but the dose is obviously spread over a period of eight to 12 weeks for AstraZeneca. That’s when they say it’s most effective.

“So more than likely the government will vaccinate everyone first, give them their first shot of those who are wanting to be vaccinated. That could be up to 100,000 persons barring we don’t have any spillage and wastage.

“So, we’re looking in the first tranche to be able to do that and if we do so, we have an adult population of a little over probably around 200,000 persons. Our entire population in country is probably somewhere in the area of 400,000 persons so 100,000 is about a quarter of our population.”

In any event, Mr Wells insisted there will not be a stall in inoculations across the country once those first doses have already been administered.

He added the government has already secured ways to receive additional vaccines.

He told reporters: “We have approached Covishield (and) the Serum Institute of India where the AstraZeneca is being produced. We have approached them directly to purchase vaccines from AstraZeneca. We have also as you know through the Africa portal, we have enough vaccines offered to us to vaccinate about 70,000 persons which is another 140,000 doses and then there’s the additional purchase that we can make through the WHO.

He said only when the government has begun the process of mass vaccination, will officials be able to further reopen the economy.

Mr Wells also sought to assure residents that vaccines are safe and effective, pointing to scientific data released from Israel which has the highest rate of COVID-19 vaccination per person in the world.

“Israel has vaccinated more than half of its people, more than six million and we could say from the results that Israel has put out to the world that the vaccines are proving to be safe, effective, efficient and with all the hoopla about side effects and dangers and life being lost – none of that has happened in the results we have seen and so true to form, we are just saying to the Bahamian people, your government has made good decisions about the vaccines coming in and we want you to avail yourself of it.”

Mr Wells said more detail on the rollout of doses will be provided by Prime Minister Dr Hubert Minnis.

“The rollout could start as early as next week…but I will leave the announcement of such things up to Prime Minister who has been... leading the charge in many regards,” the Health Minister said.

Mr Wells could not exactly say how many doses will arrive in the country in the first tranche. However, The Bahamas is expected to receive 100,000 doses of the Oxford-Astrazeneca vaccine from the World Health Organisation.

According to officials, several vaccination sites have already been identified in New Providence, Grand Bahama and the Family Islands.

Among the first priority groups eligible to receive the COVID-19 vaccine on New Providence and Grand Bahama are healthcare workers; people over the age of 65; uniformed branch members; frontline workers; critical workers in high-risk settings and other essential service workers.

Meanwhile, on the Family Islands, residents there will be vaccinated at the same time and the schedule will not follow the prioritised group rollout as previously announced.

Dr Minnis has already said that vaccine administration in The Bahamas will be a huge operational and logistical challenge but added the National COVID-19 Vaccine Distribution Plan is in the final stages of completion in preparation for the vaccine’s arrival.

According to Mr Wells, some $5 million to $6 million has been allocated by the government for vaccine procurement and deployment in the country.

I highly recommend every member of parliament be first in line to get at least two doses of this AstraZeneca vaccine. They fully deserve it.

"Over the age of 65"? does that mean 65 and over, or at least 66, or what. Sorry to sound stupid, but I just turned 65 and for obvious reasons I would really like to know.

Do they jab the testicular?

Told by most trusted inner-circle source that what can best be described as unconventional bromance shared between Comrade "LOI" Renward and Mr. Minnis, has dimmed. Think Renward possesses bullocks to pick up the phone to call "Brave" to discuss odds recrossing the House floor in hopes of rekindling their damaged PLP days bromance. Yes?