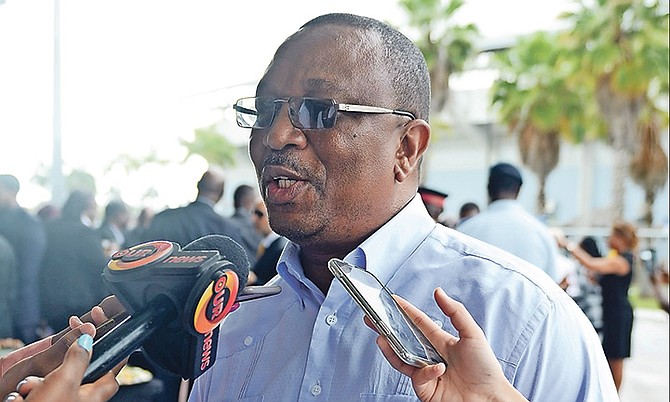 FREE National Movement chairman Carl Culmer was adamant yesterday that he didn’t think that the party’s image has been negatively affected by controversy over the last few years, most recently the resignation of former Minister of Youth, Sports and Culture Lanisha Rolle.

Asked if he felt this matter and other controversies that have dogged the Minnis administration could affect the party’s image, Mr Culmer said: “I don’t think so because everybody will look at the FNM in a different light because they realiae the FNM is straight up.

“There is a difference between the FNM and the PLP. When anything happens, our people would gracefully bow out and do not bring their concerns on the party.

“Unlike the PLP, they dig in deep, and they try and bury themselves. Then they get lost, but with the FNM our people realise that the party is bigger than any individual and they gracefully bow out and allow the party to continue.”

When his attention was drawn to his party’s issues, Mr Culmer said: “No, no, no what controversy?”

Prime Minister Dr Hubert Minnis accepted Mrs Rolle’s resignation from her ministerial post on Tuesday, with a statement from the Cabinet Office noting that “certain matters have been brought to” his attention and are currently under investigation.

The Tribune understands that when ministry officials and the board of the National Sports Authority became concerned that established processes and procedures were allegedly not being followed at their agencies, they took their concerns to Dr Minnis on Saturday, February 13.

Dr Minnis is said to have then immediately requested a “lockdown” of the ministry, ordering that no cheques or contracts be issued.

The following day, Sunday, February 14, he asked Financial Secretary Marlon Johnson to launch an audit into the Ministry of Youth, Sports and Culture and to report its findings within at most four days, this newspaper understands.

The Office of the Auditor General is now auditing the National Sports Authority. Its focus intersects with the inner workings of the Ministry of Youth, Sports and Culture.

Mrs Rolle could not be reached for comment yesterday. Attempts to reach the NSA were also fruitless.

In its term, the governing party has weathered the controversial Oban deal of 2018 that has yet to materialise. Four Cabinet ministers, including Mrs Rolle, have resigned and recently House Speaker Halson Moultrie quit the party to become an independent MP.

Back in 2016, both Comrade Papa Hubert and Carl Wilshire, had backed Justice Peace Rodney Moncur to be elected Chairman of the RedCoats party.

is this a case of emperors new clothes?

does anyone really expect this man to speak TRUTH It is not in him?

Lmao this man was asked nothing about the PLP and mentions them everytime..