Stateside: To Rush Limbaugh It Was All So Simple - Most Americans Just Don’T Like The Left And Democrats 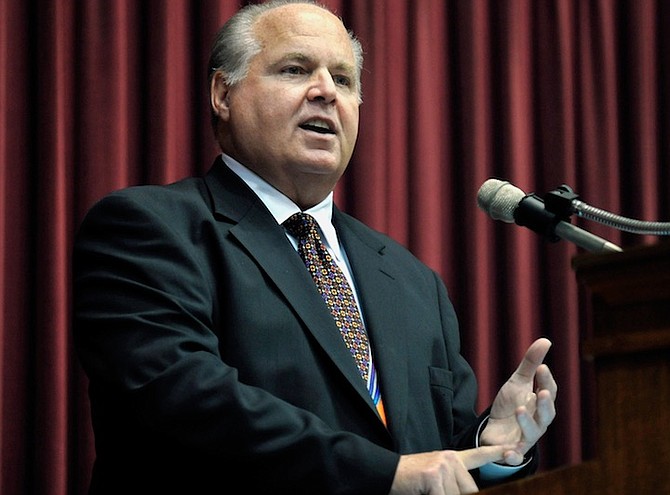 IN this May 14, 2012 photo, Rush Limbaugh speaks during a ceremony inducting him into the Hall of Famous Missourians in the state Capitol in Jefferson City. Photo: Julie Smith/AP

He was Donald Trump before Trump was Trump.

This bombastic native Missourian became the king of American talk radio for more than 25 years. Often describing himself accurately as first and foremost an entertainer and master salesman, Limbaugh almost coincidentally also became the bellwether of the American Republican Party.

You probably heard Limbaugh’s daily radio show at least once. It was unquestionably provocative and entertaining. Part of his appeal was to like-minded individuals who have become the core of Trump’s “30 percent base” of American voters.

But it was also fun to listen to this admitted Oxycontin-addicted showman even if you disagreed with him. Masquerading as a conservative as do so many contemporary Republicans, Limbaugh initially supported Texas Senator Ted Cruz in 2016, attacking Trump as “not conservative”.

But more recently, in the manner of South Carolina Senator Lindsay Graham, Limbaugh became a golfing partner, social pal and vocal supporter of Trump, who infamously awarded Limbaugh the Presidential Medal of Freedom as a kind of valedictory gift last year.

A biographer once described Limbaugh as “the Elvis Presley of broadcast radio. His effect as an enforcer, keeping Republican politicians in line, was greater than that of a President or the party’s national organisation”.

Like Trump the owner of a Palm Beach estate, Limbaugh lived quite the life of opulence while trumpeting his populist roots and beliefs. It has been estimated that Limbaugh earned about $40 million a year from his radio broadcasts. He boasted of more than 20 million daily listeners at his peak in the 1990s and 2000s, and his show was syndicated on 600 radio stations across the nation.

It has always been easy for those who disagreed with Limbaugh to also criticize his fans. But the respected Pew Research Centre concluded several years ago that Limbaugh listeners were actually better informed overall on current events than fans of National Public Radio. And his fans were also found to be more likely to have college degrees than public radio listeners.

Behind Limbaugh’s outlandishness lay a canny intelligence. Here is his lengthy explanation of the massive, enduring support Trump still enjoys among millions of voters:

“If conservatism were the glue, the belief and understanding of deep but commonly understood conservative principles, if that’s what defined people as conservative and was the glue that made the conservative movement a big movement, then Trump would have no chance.

“He literally would have no chance. Because, whatever he is, he’s not and never has been known as a doctrinaire conservative. Neither is 90 percent of the Republican Party, so it’s not a criticism. It’s not an allegation.

“The point is that if conservatism were this widely understood, deeply held belief system that united conservatives and united people as conservatives, then outsiders like Trump wouldn’t stand a prayer of getting support from people.

“Yet he is hugely popular. Therefore, it’s safe to conclude that there are other things at play here that make people conservative. And look, I’m gonna go back to it.

“The thing that’s in front of everybody’s face and it’s apparently so hard to believe, it’s this united, virulent opposition to the left and the Democrat Party and Barack Obama. And I, for the life of me, don’t know what’s so hard to understand about that.”

There could be uncomfortable truth in the stark simplicity of Limbaugh’s explanation. The millions of Democrats and Independents who remain vexed at Trump’s appeal might take note.

THE prevailing winds in the Los Angeles area are mostly offshore westerlies, so flights into Los Angeles International Airport approach from the east along the intensely populated San Bernardino Valley. Departing flights take off from seaside LAX out over the Pacific Ocean for a few minutes and then bank sharply to the left to adjust to an easterly course.

Almost immediately, a massive wooded shoulder of land appears below. This is the Palos Verdes Peninsula, home to some of the wealthiest and yet most discrete communities in the Golden State of California.

Everyone has heard of Hollywood and Beverly Hills. Many are familiar with other West LA neighbourhoods like Brentwood and Westwood. Fewer know Palos Verdes Estates. But it certainly well known to the locals. Located south of downtown and the airport, this huge headland is home to several communities with hundreds of wooded, expensive homes.

It was on a hilly downhill stretch of Hawthorne Boulevard on the border of Rancho Palos Verdes and Rolling Hills Estates that Tiger Woods crashed a Genesis SUV on Tuesday. (Genesis is Hyundai’s luxury brand.) Woods suffered massive leg injuries and “is lucky to be alive,” according to a policeman who was among the first to arrive at the scene.

The news flashed across the world. Tiger fans from Jack Nicklaus to Donald Trump immediately offered sympathetic reactions. The collective global gasp was reminiscent of other Los Angeles sports-related datelined stories like the helicopter crash that killed Kobe Bryant, his daughter and others in 2020 and the revelation in 1991 that fellow Laker legend Magic Johnson was HIV-positive.

This is different. Tiger Woods, global superstar, is also one of us. His financial interest in Albany and sponsorship of golf tournaments in Nassau link him to us and us to him.

This 45-year-old, who transformed golf and added many millions of fans for the game in 1997 when he won his first Masters at the age of 21, has dominated golf since then. The spike in television viewership when Tiger competes in a tournament is well documented. When he leads on the last day of a tourney, golf becomes must-watch TV.

We can only wish this man well. He’s had his share of troubles, some self-inflicted, over the course of his storied career. He has also endured five back surgeries, the most recent just a couple of months ago, and numerous procedures on his legs.

Now he faces more surgery, and more rehab. Hopefully Tiger’s steely will and unmatched determination will again carry him through, and we will see him again here soon.

Limpballs was your typical right-wing authoritarian, racist bigot type who made fun of people with HIV and just loved Trump. He was typical of the right-wing propaganda machine spewing conspiracy theories without facts so typical of the B.S. nonsense heard from various sources in the U.S. With his ilk, lies are facts, facts are lies, right is left and left is right and the truth has absolutely NOTHING to do with it! Good riddance to a man who did his best to divide America just like Trump. He was also a drug addict (oxycontin)

"He was Donald Trump before Trump was Trump"

What is this even supposed to mean?

Trump has had celebrity status since the early 80's as an American icon of ultra wealth. In the early 90's before people talked about being "Bill Gates Rich" it was common to reference Donald Trump as a well known wealthy icon. None of the idiots that call Trump a "racist" today had any issue with him before he entered politics. The Clintons invited him to weddings, Oprah, Jessie Jackson and Al Sharpton were his associates, etc.

Only when Trump threatened the criminal Democrat party's hold on power, that's when the leftist media spun him into some kind of Hitler figure and countless brainwashed morons that eat it up. But anyone old enough, with a memory span longer than a goldfish, knows well that Trump was never a hated figure but renowned for his wealth and success. Just listen to rap music references about Trump from the 80's, 90's and all the way through to the 2000's before Trump attacked the Democrats and see how it shifts from adoration to hatred once the media machine started their attack.

You are correct, trump was highly thought of before he ran for president. But its now pretty obvious that everything about him was a lie. He was never a successful business man, he was never an honest man, had he stayed out of politics he may have never been exposed. But being the moron he is he actually believed his lies about himself and actually thought he could do the job. Lol. The man destroyed himself by going into politics. Lol. Because he's so incredibly dumb. Lol...

"You are correct, trump was highly thought of before he ran for president. But its now pretty obvious that everything about him was a lie."

The only lies came from the corrupt corporate media, your ABC, NBC, CNN, MSNBC etc. fake news that pushed lies like "WMDs in Iraq". Nothing about Trump has changed since back in the 80's when he was a media and pop culture darling. Trump is, if nothing else, 100% authentic, and that's why he gained such popular support. Trump was, and still is, greatly hated by the establishment that profits from illegal Wars and other corruption, that's why they colluded to get rid of him. Trump is not destroyed, although they wanted to destroy him very badly so that such a populist President never threatens the swamp's hold on power ever again.

Only could be a trumpie....