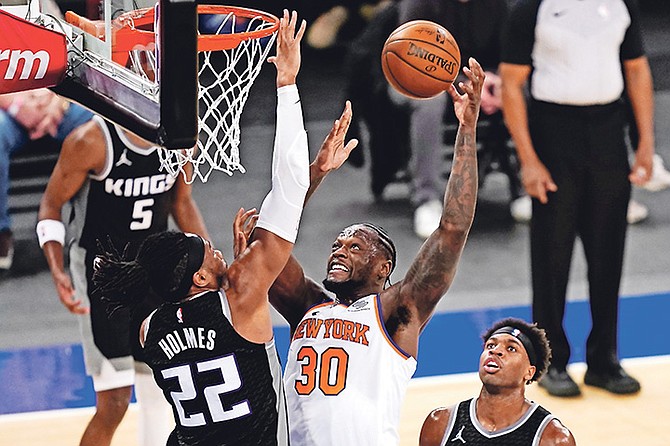 NEW YORK (AP) — Immanuel Quickley scored 18 of his 25 points in the first half, and Julius Randle had 21 points and 14 rebounds to power the New York Knicks to a 140-121 win over the Sacramento Kings last night.

Quickley and Randle were two of six Knicks players to finish in double figures in scoring as New York improved to 16-17.

Alec Burks had 24 off the bench, Derrick Rose finished with 18, RJ Barrett had 12 and Reggie Bullock chipped in with 10 as the Knicks had a season high for points.

While the Knicks cruised to their fifth win in their last seven games, Sacramento’s freefall continued.

The Kings (12-20) dropped their ninth straight, a stretch in which they have allowed 126.3 points per game.

Barring both teams making unexpected runs to the NBA Finals, the Kings and Knicks entered the second and presumably final matchup of the season on significantly different trajectories.

Sacramento appears to be a team that is trying to learn about itself while the Knicks have clearly defined expectations as to how they play.

And that was on full display.

New York led 77-62 at halftime due to a team approach in which all but one player scored in the opening 24 minutes.

In short, they were not a one-man gang — even if Randle and Quickley received “MVP” chants from the Madison Square Garden crowd.

New York extended its lead to as much as 18 midway through the third quarter after Randle knocked down a 10-footer with 6:59 left, but the Kings ended the period on a 22-11 run which was capped by Fox’s buzzer-beating layup.

Burks capped the stretch with long 3-pointers on consecutive possessions. The Kings wrapped up their two-game New York City excursion by saying goodbye to one teammate and hello to new one.

In 23 games with the Kings, Robinson averaged 5.3 points, two rebounds, and 0.9 assists. Pelle, waived by the Nets on February 16, averaged two points, 2.3 rebounds, and one block per game in three games with Brooklyn.

“It has been a tough couple days,” Kings coach Luke Walton acknowledged during his pregame availability.